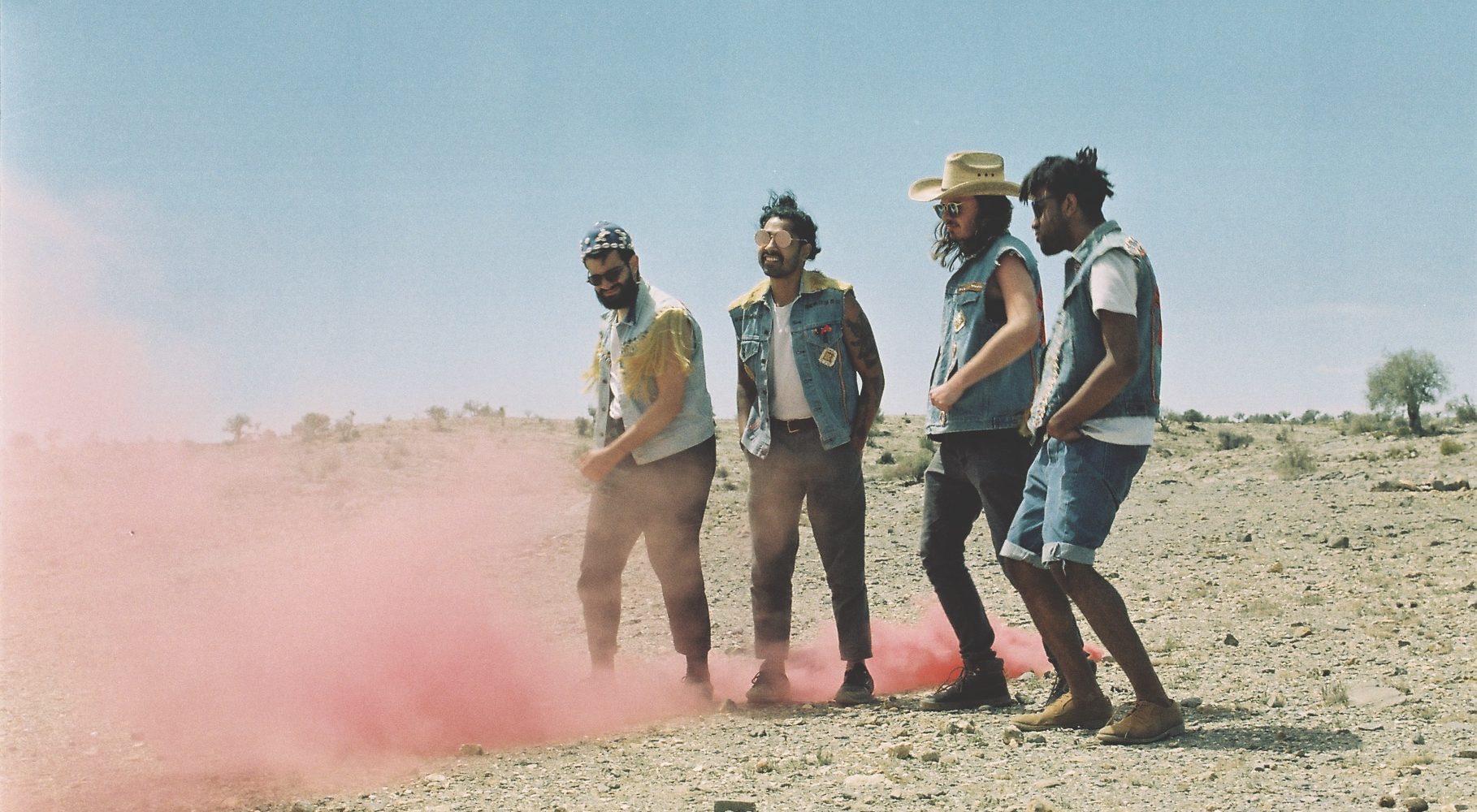 Hailing from London and Bahrain, Flamingods blend estern psychedelia with pop and Eastern musical influences. The band were founded by Kamal Rasool in 2010 and include Karthik Poduval, Sam Rowe and Charles Prest.

The band have just released their new single, ‘Koray,’ which is taken from their latest album Levitation which was released on Moshi Moshi Records. Kamal says: “It’s a song about cultural identity and growing confidence to be your own person; to create your own golden lifestyle outside of your culture’s expectations.”

The band are returning to the south coast next week when they headline The Heartbreakers in Southampton and as the band prepare for the show I catch up with Charles.

Could you tell me about how you initially got involved with music and who influenced you most?
As people we’ve always had an interest in music and pretty much nurtured that interest from a young age. Three of us were in a band together while in school in Bahrain and we all listened to a wide range of music ranging from prog rock and experimental psychedelia to hip hop and metal. There have been so many different stepping stones for all of us individually which led us to doing music but we often cite Matt Groening’s curated All Tomorrow’s Parties as a major one for starting Flamingods.

Could you tell me about how the band came to be formed?
It was originally a solo outlet for Kamal to explore more experimental sounds using eclectic instruments while drawing from experiences he had while travelling to places like Tanzania and the Amazon. When he started getting offers to do live shows, we all came together to jam in Camberwell where we were based for a while to expand on his ideas and create new ones in the process.

Can you describe how you felt whilst after you’d released your first single?
It’s always fun releasing new music you’re excited about and I think that was pretty much how we all felt when our first proper single ‘Quesso’ came out. It was all just brand new and didn’t really know what was going to happen next!

There have been so many different stepping stones for all of us individually which led us to doing music but we often cite Matt Groening’s curated All Tomorrow’s Parties as a major one for starting Flamingods.

For those who are new to your music which three tracks would you encourage them to check out first and why?
Ooh that’s hard because we really like to reinvent ourselves with each album, but I’ll give it a go! I guess to get an idea of our musical progression over the years, check out…

“Anya” from our album Majesty is, by comparison, an ode to our love of exotica music from the 50s and 60s in America and was heavily inspired by artists like Les Baxter, Arthur Lyman, Tito Puente and so much more.

“Nizwa” from our latest album Levitation is an ode to our Middle Eastern influences, drawing on some of the sounds from the region and blending it with modern trouser flapping sub-bass and trap beats.

Over the years has your approach to performing live changed and if so how?
Yes and no. There are some elements that have stayed the same, such as the constant instrument swapping between songs and having that explosive and otherworldly aspect to the live show. Nowadays we are more focused on streamlining aspects of the set so it can be even better and more visually pleasing to an audience. We’re constantly looking to improve the set after each show.

How do you feel when you share your music for the first time? Do you prefer to share new music live where you can see the crowd’s reaction first hand or online perhaps?
Our audience seems to connect with us more live, so we really look forward to showcasing new stuff in that space. It also helps us to road-test songs before recording them by seeing how the audience reacts and what can be done to make the songs better.

What bands and artists are you currently listening to and how are they inspiring you to explore and implement new ideas with your music?
We’re lucky to be surrounded by a wide range of artists and friends in London who are always a great source of inspiration for us. Our good friend Alabaster dePlume for example, who speaks about life and existence in a way we’ve never really heard before creates an incredibly mystical blend of folk and jazz and has definitely had an influence on us, as with most of the Total Refreshment family like The Comet is Coming, Snapped Ankles, Rozi Plain, Capitol K and so much more.

What can those fortunate enough to have tickets expect from your live show?
It’s a technicolour musical voyage designed to both dazzle and hypnotises you.

What does the rest of the year have in store for you?
We’re touring all over till the end of the year and already stirring the pot for the next musical venture.