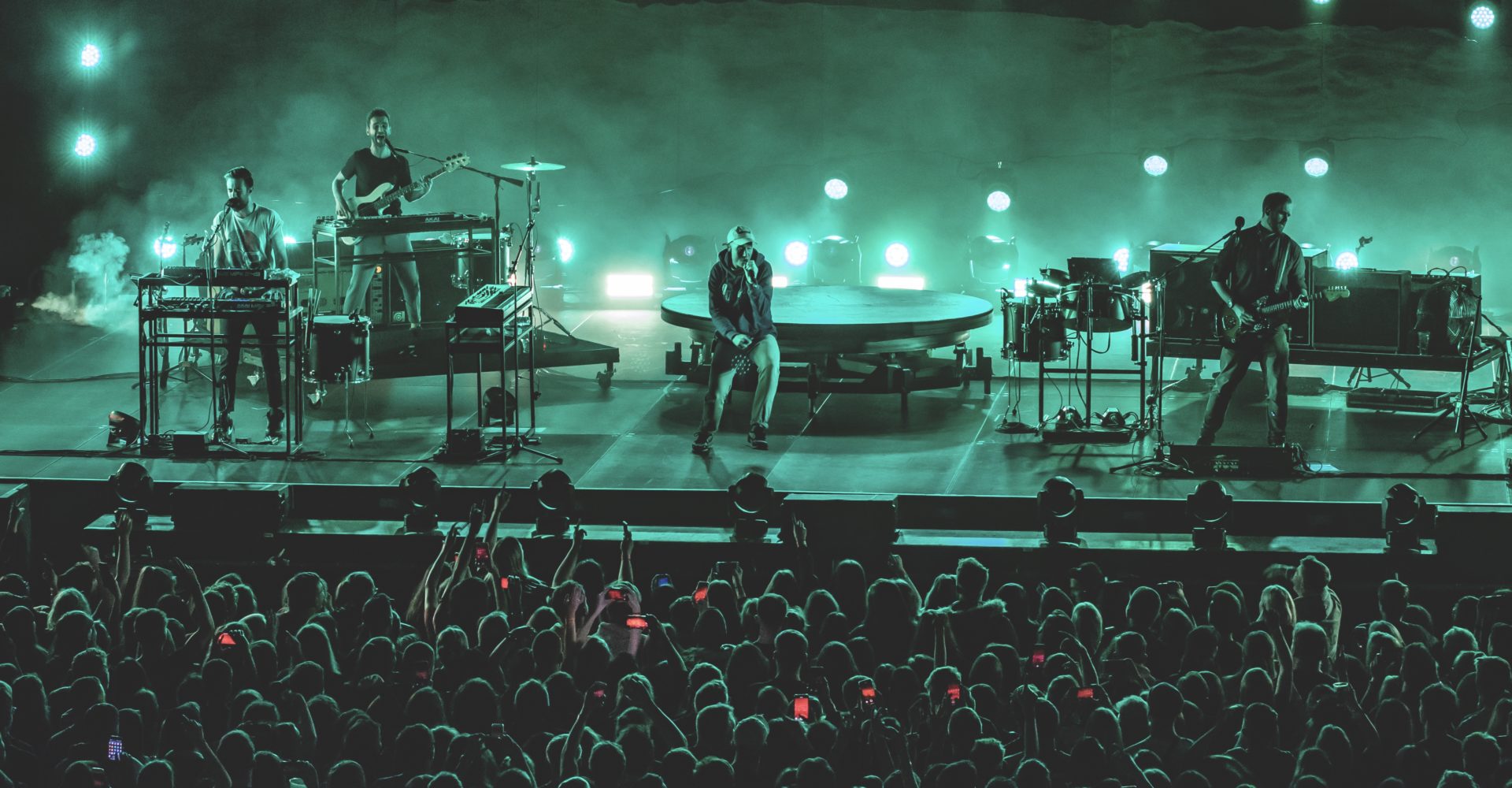 Bastille, that band that created ‘that’ song that gets stuck in your head for the rest of the day after you’ve heard it, yep – ‘Pompeii’! Bastille arrived in Brighton as part of their ‘Still Avoiding Tomorrow Tour’, which weirdly for a band doesn’t coincide with a new record. Such is the pull and following of the band they still manage to sell out sizeable venues.

The new album was touted in 2017 with a definitive that it will be released at some point this year in 2019. The band have so released 4 singles in the interim including ‘Quarter Past Midnight’ in May 2018 and ‘Grip’ in December 2018.

Bastille have an extensive list of support for this tour and tonight we were treated to the delights from Ulysses Wells and Lewis Capaldi, neither of who I had heard before so was looking forward to taking in their sets together with firing off a few photos to warm up.

Ulysses Wells was first up and was dressed in true rock n roll attire in a long fur coat bearing his chest. The sound akin to a variety of Jack White, The Black Keys with a bit of Royal Blood thrown in, very bass line heavy in parts. It was refreshing to hear an artist that is not buying into the current mainstream indie pop/rock sound. Ulysses admits in a previous interview that there is a lot of anger in his music as his girlfriend of 10 years left him for his best friend causing the demise of his band. I was impressed with Ulysses stage presence, definitely an act to go and see live.

Lewis Capaldi was next up, a singer/songwriter from across the border in Scotland, and what a voice this man has for a 22-year-old. Lewis is the fastest ever unsigned artists to reach 25 million play on the Spotify platform and its clear to see why. The depth and sound of his voice is beyond his years. ‘Bruises’ is a great song and the lyrics carry a deep powerful punch about heartache. Lewis has amassed a big following already without even putting an album out, this has seen him support the likes of Rag & Bone Man, Niall Horan and Sam Smith.

Bastille hit the stage and began their set by playing behind a red curtain which was at the front of the stage and had the digital time and images being projected on to it and various quotes. A Cat Stevens cover, ‘Wild World’ opened the set with ‘Quarter Past Midnight following’. The curtain dropped after the second song had finished meaning we could get in and shoot some songs up close, before this I had taken the opportunity to shoot from up in the seats opposite the stage for a different perspective.

Dan Smith is one energetic guy and was bouncing around the stage left to right whilst using his raised platform in the middle of the stage to leap from every now and then. Dan admitted that Bastille hadn’t played the Brighton Centre before and it had been a fair while since they had headlined a show in the town. The platform provided the space for many feature over the course of the show which including Dan lying down on a sofa at one point with ‘Dooms Day’ sprayed on the back whilst it span around.

The Craig David collaboration ‘I Know You’ was well received by the crowd and Ulysses Wells joined the band on stage to play on ‘Blame’. The lyrics to ‘World Gone Mad’ were then projected onto the backdrop throughout the song before it was Lewis Capaldi’s turn to join the band on stage to provide his ‘old’ voice on ‘Bad Blood’.

The crowd were in good voice and none more so when the band dropped ‘Pompeii’ which saw people jumping in the seats and dancing in the aisles. More of this continued towards the end of the set with the tracks ‘Good Grief’ and ‘Of the Night’.

The gig provided a good reminder of the quality of what Bastille bring to their live shows and I have no doubt left the crowd in anticipation of what’s to come on the forthcoming album. If you are looking for your Bastille fix, they have already been confirmed to play the main stage on Saturday at this year’s Isle of Wight Festival and will also be headlining the BBC Radio 1 stage at Reading & Leeds Festival!