Histories on Film Panel with P..

Recently we have just came back from The Great Escape where three Strong Island Recordings acts involved tore down the collective house. Is Bliss plus Boneyards (in their own backyard) shook up the tiny, very well decorated Black Dove down snotty, fuzzy riffs and utter chaos (read about it on the Urban Outfitters blog where Boneyards are called a highlight with the likes of London Grammar). Arrows of Love smashed down the Hope at The Artrocker stage in one of the craziest gigs I have seen them play, check the Artrocker review for more details.

Speaking of Arrows of Love they have not only been announced for Truck Festival but they’re playing the main stage as well as DV8 Festival in York and shows and festivals across Italy in July!  Is Bliss are also clocking up festival appearances with Blissfields and Victorious as well as numerous shows including The Old Blue Last 13th July and playing with Boneyards for the Sealings EP launch on the 9th August (details of Sealings show on the Facebook event) also with the super rad Theo Verney. Both events are free and at The Old Blue Last. You can also catch Is Bliss in Portsmouth on the 12th at The Birdcage (above The Festing) with You’re Smiling Now But We’ll All Turn Into Demons and Bellyeyesmile.

Boneyards are planning numerous shows with the forthcoming ‘Rest In Beach EP’ out on the 15th July via digital and very soon after on 7″ on SIR including, bringing them back to Portsmouth for another show. The EP got an early review over at the mighty 405 too. Want to have a listen?

We have also confirmed our Southsea Fest stage with; Arrows of Love, The Physics House Band, The Black Tambourines, Slowcoaches, Playlounge, Tyrannosaurus Dead, Yoofs, Cycle Schmeichel, Perch, You’re Smiling Now But We’ll All Turn Into
Demons, Battery Hens and new 2 piece thrash punk outfit by the way of Nottingham and Portsmouth Ricky Fitts. Read all about our stage HERE.

Check the playlist below. Also purchase tickets ASAP as the event will be a sell out, we have had a peek through the other stages and it looks to be the best SSF thusfar.

We are also very excited to be taking SIR out of Portsmouth for the night and parking up at that there London at The Old Blue Last 13th July for our first ever London label party. The line-up is Is Bliss, Tyrannosaurus Dead (playing our SSF stage), Gum and Battery Hens and it’s FREE. Come down if you’re in Shoreditch that evening for an evening of noise pop and chaos. Hit up the Facebook event for more info. Going to be GOOD.

The self titled Honeycomb Bones EP is set for a release after the Boneyards ‘Rest In Beach EP’, then we will be releasing  the debut single of Portsmouth’s own Is Bliss. We also have a compilation we’re releasing with rad bands from here to Mexico to the United States as well as other amazing releases we have yet to announce.

Keep an eye out on our Facebook and Twitter (@StrongIslandRec) for updates daily on our label. We have more to announce very soon so keep your eyes peeled… 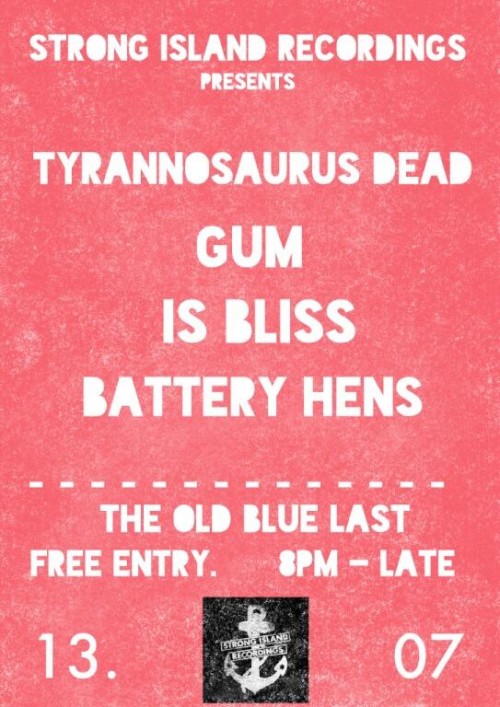 Getting an afternoon snooze on at the office? Snap out of it with a listen to Boneyards recent, savage set at the LAW Magazine’s 2nd birthday party: