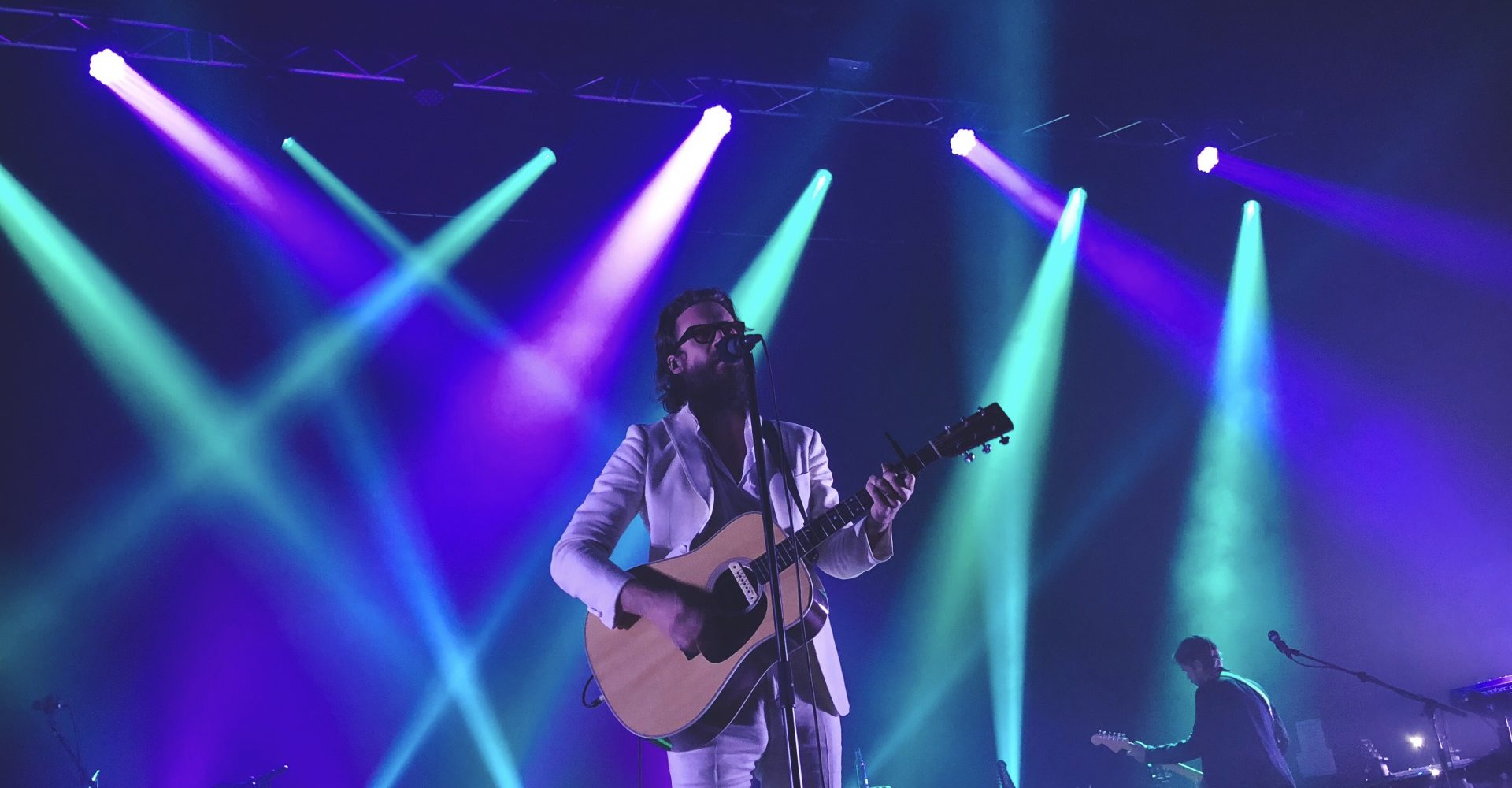 He may well be playing a part but it’s undoubtedly true that Josh Tillman’s Father John Misty is a proper rock star. White suit, shades and guitar, a spot light shining down to create the perfect front man shaped silhouette, tonight’s show kicks off with the cracking Hollywood Forever Cemetery Sings before going into a new album one-two of singles Mr Tillman and Disappointing Diamonds Are the Rarest of Them All. It’s a bold move to front load the set with some of his bigger ‘hits’ – Diamonds is perhaps one of only a handful of Father John Misty tracks to have what could be described as a memorable pop chorus – but the most notable aspect of the set’s opening few minutes is actually nothing to do with the songs but the total absence of any audience interaction for the first 6 tunes.

Tillman is famous for his between song monologues and diatribes but tonight it seems the acerbic wit has been left in the dressing room. Let’s be clear though, there is nothing wrong with the songs we’re being treated to. In fact, it’s almost a dream set-list with the fantastic Nancy From Now On and Chateau Lobby #4 getting airings early doors. But then, just before the 7th song of the evening the guitar is put down and Father John emerges. A brief greeting before the sermon begins; a pseudo-scientific discussion equating crowd whoops to getting high. Predictably this first monologue of the night is met by one almighty audience whoop!

Stalking the stage, Misty is electric, delivering a dramatic Hangout at the Gallows full of gangling limbs and falsetto vocals whilst Nothing Good Ever Happens at the Goddamn Thirsty Crow with its tales of sleazy LA bar-room based nights is almost the quintessential FJM track. Is it based on truth? A half truth? Does it really matter? It’s all part of the mystique.

New song Please Don’t Die sounds like peak 70s Lennon and Elton mashed up whilst between albums single Real Love Baby continues to take the set – in a good way – into melodic soft rock territory. He’s also most definitely come alive on stage by now- the charismatic frontman we hoped for continuing to engage with the audience between songs. Halfway through the set we are treated to a beautiful version of I Went to the Store One Day, with just Tillman and an acoustic guitar.

For all the showmanship and pomp the fact remains that Tillman possesses such a heartbreakingly beautiful singing voice. It is these more subdued moments that can also hold the crowd in rapture and this trick is repeated during the first song of the encore where a musically sparse The Palace is arguably the stand out vocal performance of the night.

So, an epic vocal delivery, boundless energy and sex appeal on stage and some excellent tunes. It took a little while to get going but by the end you’re willing it to go on. The evening does finish however with the soaring I love you, Honeybear and the psychedelic folk of Date Night leaving the crowd suitably spellbound.