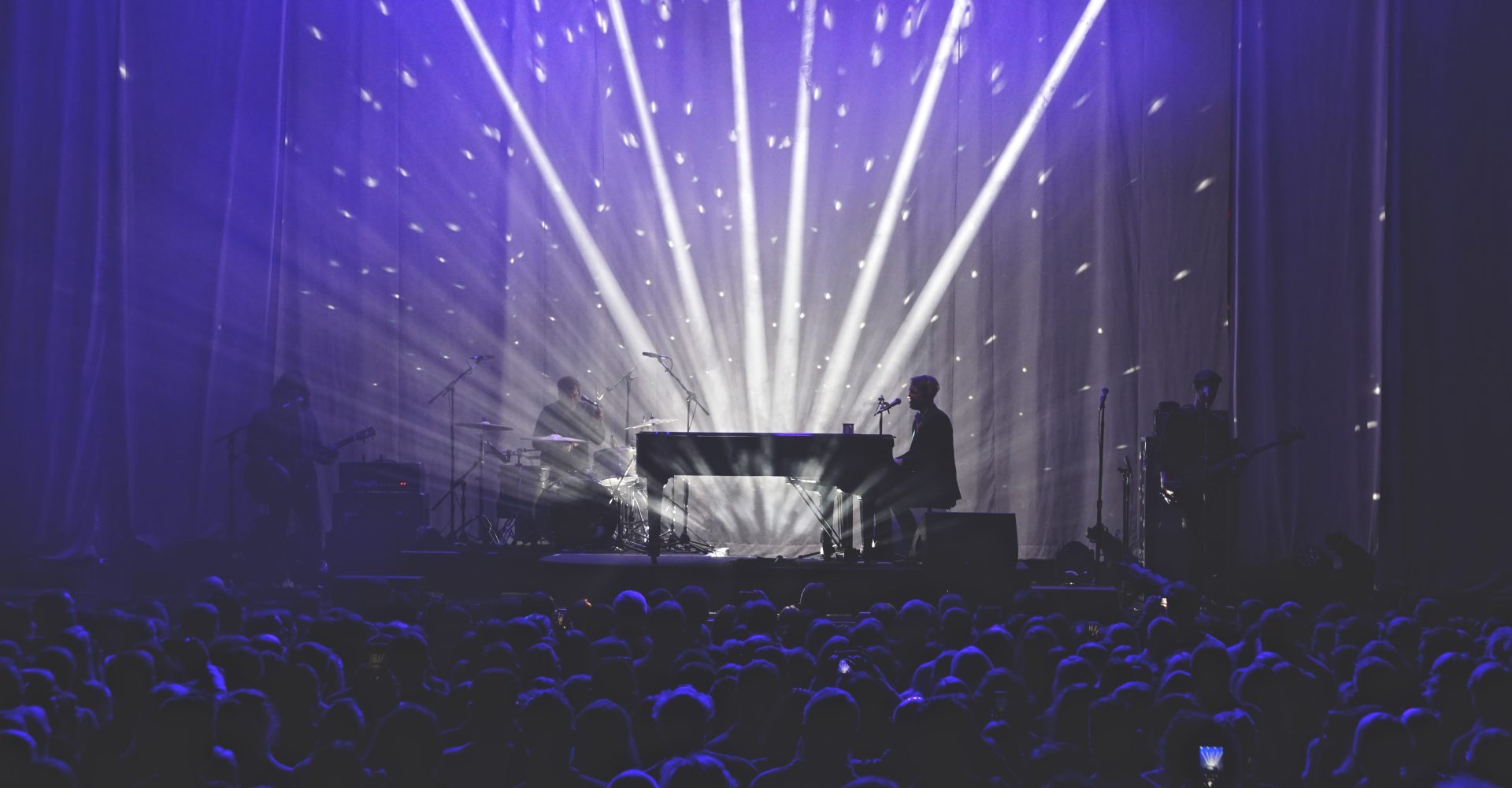 This was the last date on Tom Odell‘s ‘Jubilee Road’ tour, which saw him returning to the city which he lived in and wrote some of his most iconic songs.  The venue had been changed to the Brighton Dome, which I think was possibly the best move that could have taken place.  It is such a beautiful space, which gave the whole event a much more intimate and personal feel, not to mention adding a warmth to the evening.

The evening began with two other groups, Charlotte and Max Jury, who were both fantastic.  Charlotte and her guitarist have a real vulnerability to their music, which was full of emotion and feeling.  It was one of her first gigs of this size, but they did so well.  You could tell that she is someone who cares very deeply about her music, which really came across.  Her cover of a Childish Gambino song really showed off just how good a voice she really has.

Max Jury took to the stage after with a simple setup of his guitar and a keyboard.  From the very first note that came out of his guitar, the audience was captivated.  I imagine that touring with Lana Del Rey has helped him no end, which the crowd really appreciated.  He was a very charismatic performer, who seemed to really understand performing to the crowd, even to the extent that he went into the standing part of the dome so that he could perform a song with the crowd in a circle around him!  His voice was amazing, and the crowd responded so well to his music.  It was a wonderful prelude to the main act for the evening.

You could feel the tension and sense of anticipation rise with every minute that went past, with a nervous excitement building until the lights went down.  Tom was greeted with rapturous applause as he made his way to the front of the stage to take his seat at his piano.  A hush fell over the crowd as they waited to see how he was going to open the proceedings.

After a brief pause, he let his hands wander over the keys, the first few notes springing powerfully out of the piano, which sent the enthralled crowd wild!  He hit the first words from the song perfectly, demonstrating just what an amazing vocal talent he is.  I was taken aback at just how powerful his voice is, with such an amazing range and clarity, that I was left wondering if there was anyone who I had heard recently that could come close to him.  The first few songs flew by, as he really got into his swing, which kept the crowd hanging onto every word and note that he and the band played.  There were moments where he became so enthralled in his music, you could have believed that he had forgotten that we were all in front of him.  His voice became so guttural at times, that you couldn’t but feel all the emotion and raw energy that had gone into writing the songs in the first place.  I was genuinely blown away by what a phenomenal singer and musician he is, which when I turned around, I realised the whole crowd were too.

He very quickly found his stride and really appeared to be revelling in playing in what he said felt like a homecoming gig.  It was at this stage that he paused to speak with the crowd and then introduced the rest of the band.  He also introduced his sax player, who he was only able to get to play in his London and Brighton gigs for his classic ‘You’re Gonna Break My Heart Tonight.’  Everyone there went wild with this news and rightly so; the saxophonist brought a special je ne sais quoi which just added to the depth and melancholy of the song.  He seemed to lose himself completely in the music at this stage, but you could feel the pain coming through with every single word.  This moved onto a real sense of deep pain and anger with ‘I Can’t Pretend,’ with every note and word being played and sung with such ferocity, that you just wondered where all the energy for this was coming from.  The clarity and power were awe-inspiring, and you could really get an understanding of everything he has gone through to be able to write such emotive music.

He lightened the proceedings from here and after playing a few more songs from his previous albums, he took himself off into the crown, wandering along the balcony while still singing ‘Hold Me’ perfectly.  The crowd loved every moment, with fans rushing over to just get that little bit closer to him.  He brought things back to the front of the stage, where he sat down, regained his composure before playing ‘Another Love.’  The moment the first notes floated through the air, the reaction from the crowd showed that this was one of the songs that they were waiting for.  There were stages where he was almost being drowned out by everyone joining in and singing along, which brought a whole further dimension to it.  With Tom belting out every word and the crowd singing along with him, it felt like you were being engulfed by a tsunami of musical passion.

After returning to a few more of his songs from previous albums, including another crowd favourite in the guise of ‘Concrete,’ we found ourselves at the encore.  The penultimate song was ‘Half As Good As You,’ which had the whole crowd singing along once more.  This led to the very final song of the evening, which there could have only really been one choice.  ‘Magnetised’ felt like this was another of the songs that the crowd had been willing him to play all night, with everyone getting behind him and singing their hearts out.  This was the real icing on the cake to what was a phenomenal evening.

The whole evening was an absolute showcase of fantastic writing accompanied by such vocal talent and amazing musical skills, that you felt emotionally drained through the journey he had managed to take you on over the past two hours.  I was blown away by the evening and if you haven’t heard his new album, I would thoroughly recommend giving it a good listen.