Review: The BritRock Must Be Destroyed Tour at Por... 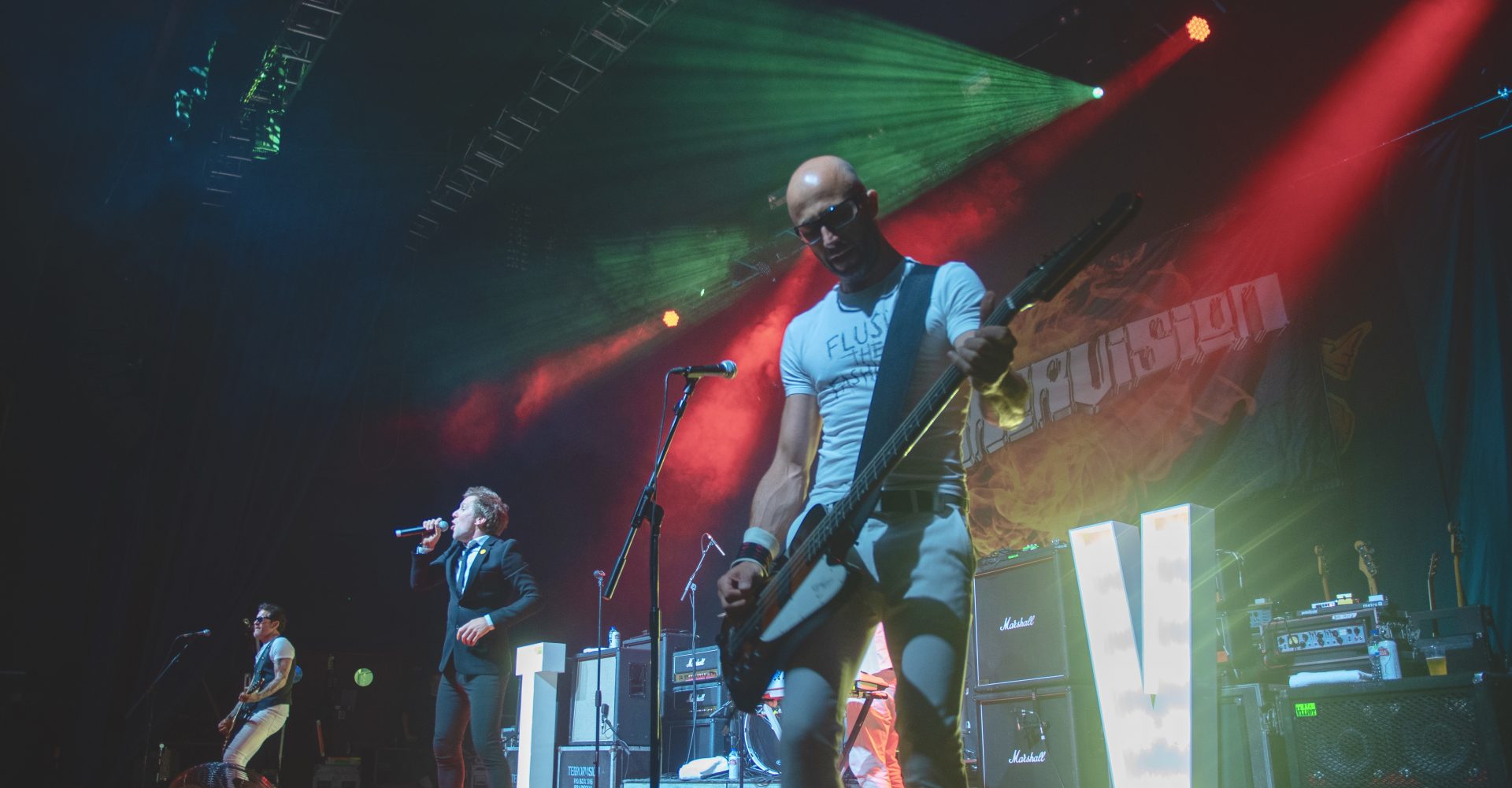 Review: The BritRock Must Be Destroyed Tour at Portsmouth Guildhall

If you’re reading this article then chances are that you were also around in the 90’s and recall (to varying degrees) the highs of Brit Pop. Back when you were being asked to pledge allegiance to either to Blur or Oasis. While this was all going on Brit Rock was also cruising along nicely in the background giving an alternative. During this time I lacked a few years in order to be going to crazy. I spent my spare change on Euro 96 stickers as opposed to being able to take myself to gigs and have a beer or two.

The BritRock Must be Destroyed Tour wound up at the Guildhall for its final instalment after a month of touring the UK. Each night comprised of a different running order between The WildHearts, Reef, Terrorvision and Dodgy; this got me thinking about how they decided on the running order. I like to think there was some kind of elaborate strategy or game involved other than just flipping a coin or management pulling straws, although it was probably slightly improvised.

Doors for the evening opened at 5 pm which many gig-goers will appreciate is pretty early! Dodgy were first to kick off proceedings, flying through a 30-minute set of seven songs including favourites ‘In a Room,’ ‘Staying out for the Summer’ and ‘Good Enough’. Lead singer Nigel Clark was doing his best to spread the peace and love vibes to the early birds that had made it down for the start.

As the stage was being turned around the backdrop revealed the next band would be Terrorvision. Most of us would be aware of the band due to their catchy number ‘Tequila’ which was remixed by ‘Mint Royale’ and reached the dizzy heights of number two in the UK charts in 1999. This was back when the charts were a thing people were actually interested in! The band entered by tipping their hat to the aforementioned before blasting straight into ‘Discotheque Wreck’ which is at the other end of the spectrum. Tony Wright leaps around the stage embracing his inner ‘Zebedee’ throughout the set whilst progressively losing his jacket, tie and the majority of his shirt. Terrorvision’s energy is absolutely brilliant and gets the crowd participating belting back ‘Alice What’s the Matter,’ ‘Pretend Best Friend’ and ‘Middleman.’ The closing track ‘Oblivion’ was a personal favourite of mine.

The Wildhearts were the penultimate act of the night and I should have realised how loud they were going to be by the Marshall amps that were stacked on the stage! I’m pretty glad that I invested in some slightly more expensive earplugs! Not to sound like Grandad but I was shooting the show already and when you’re that close earplugs are a must.

The band have gone through a number of changes of personnel over the years, but Ginger and CJ remain and were in great form. The band smashed through an explosive set of a dozen or more of the back catalogue including ‘Suckerpunch’, ‘I Wanna Go Where The People Go’, ‘My Baby is a Headf@#k’ and ‘29 x the Pain.’

Last to take the stage to finish off the evening in style was the mighty Reef! I imagine everyone reading this will have listened to their most famous track ‘Placed Your Hands’ at some point in your adult life, maybe at It’s A Sin, a student union or a house party! ‘Naked’ opened the party with its meandering riff and funky undertone. ‘Consideration’ showcases Gary’s softer approach with the vocals and keyboard lead rhythm. The biggest singalong came (as expected) with ‘Place Your Hands’ one that always is a stand out from a Reef set for many reasons.

Much to my surprise, there was a great cover version of The Faces track ‘Stay With Me’ which got everyone in the crowd dancing along and Gary channelling his best ‘Rod Stewart’ on the vocals. The track was quite fitting as Reef’s current lead guitarist is Ronnie Wood’s son Jesse. The title track of the new album ‘Revelation’ was great to hear live as is ‘I’ve Got Something to Say’. It was great to see the band a genuinely enjoying themselves on stage and who were very appreciative of everyone that had come out for the gig.