Review: Don Broco at The Pyramids

Review: Don Broco at The Pyramids

Last week Don Broco owned Portsmouth. The city was the fourth stop on their UK tour which see’s them play fourteen shows in February. Earlier that afternoon the band hosted a special acoustic show at HMV in Gunwharf Quays. Frustratingly as I was travelling down from Basingstoke I wasn’t able to make it.

This wasn’t the first time I’ve seen the band play live. I’ve been lucky enough to catch them in Manchester supporting You Me At Six, in Bournemouth and the O2 both supporting Bring Me The Horizon. This was the first time I’d seen them headline their own show so I was excited to see how they would handle being the main event.

Once I arrived at Fratton railway station I ventured over to get a cab and overheard that the girls in front of me in the taxi queue were going to the show. They clocked my Don Broco tee and invited me to share their taxi. In a lovely gesture, they wouldn’t take any money from me for the taxi either. Maybe they took pity on me as I was travelling on my own? If either of you is reading this now, thanks again!

Support on the night came from the London based Alternative Rock Trio Press To MECO. The band are signed to Marshall Records, started by legendary amp company Marshall Amplification. The band received a good reception from the crowd and I will concur that they were worth getting to the gig early for. My highlight of their set was the title track of their forthcoming second album, ‘Here’s To The Fatigue.’

The penultimate performance before Don Broco came from Dead!. The south coast band clearly brought a few of their local fans along too who were loving their performance. If you want to see more of the band the foursome is playing at The Joiners this Saturday evening.

When Don Broco took to the stage they were met with a rapturous crowd. They kick off proceedings with ‘Pretty‘ and ‘Everbody,’ both taken from their latest album Technology. I had the ideal spot right at the front slap bang in the middle. When Rob Damiani came into the crowd right in front of me it was as if he was singing to me personally. It was somewhere in the middle of the set that the crowd formed a human pyramid, it got pretty high and the band were also loving it.

The band were energetically bouncing around on stage and the crowd were feeding off it throughout. There was a steady stream of crowd surfers being passed along throughout the gig. The set also featured some old favourites including ‘You Wanna Know,’ ‘Automatic‘ and ‘Priorities.’

The previous performances have been awesome but this show was extra special and possibly my favourite yet. A massive thank you must go to Strong Island team for giving me the opportunity to see Don Broco play at this a venue of this size before they go onto even bigger shows and stadium tours. 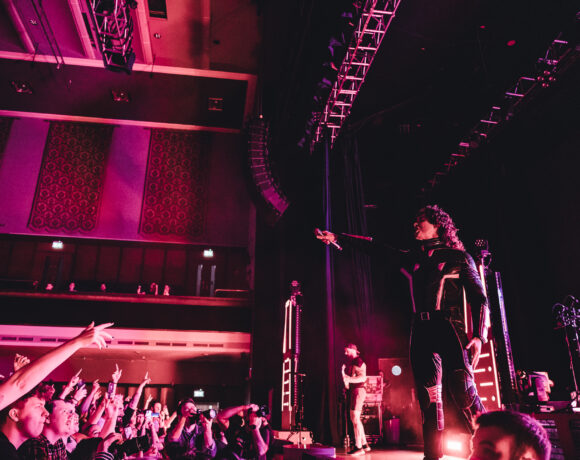