A Kind of Conjuration at the Cellars

A Kind of Conjuration at the Cellars

You would think witch trails a thing of the distant past. However, during the second world war a woman was tried and convicted under the ancient Witchcraft Act.

A play about the trial was performed at The Cellars at Eastney last week. Local theatre companies New Apollo and Cop The Needle brought audiences A Kind of Conjuration. This hour-long theatre piece, directed by Steve Pitt, featured a group of five actors, and was based on the real-life trial of Scottish medium Helen Duncan in 1944, for events that took place in Portsmouth.

The intimacy of the venue worked well for the subject matter, and enabled the performers and audience to connect in a way that isn’t possible in larger venues. When the judge, played by Christopher Marlowe, addressed the jury during the court scene, he spoke to the audience as if they were the jury, making them feel involved in the action.

Angie Lily was fantastic in the court scene, nipping backstage to change elements of costume in-between each character, resulting in a highly entertaining whirlwind of at least five different characters (and accents) testifying in quick succession. Henry Oastler was on comedic top form for his appearance in the court scene, displaying subtle character traits such as a tuck of the chin, transforming him completely from his other role in the play as a newspaper journalist. James Kirby and Tim Lowe also gave entertaining performances.

A Kind of Conjuration will next be performed at the Square Tower on 25th June as part of Portsmouth Festivities. (Doors open at 7pm, performance starts at 8pm). On this occasion the play will be preceded by a monologue from the late Harry Price, ghostbuster extraordinary. Tickets from 023 9282 6249 or 023 9273 6288 or online: www.thecellars.co.uk.

Ashley Harley in Portsmouth News:
“a little gem”
“hauntingly good”
“not to be missed”
“solid direction”

Heather James in Portsmouth News:
“I was riveted”
“very witty and entertaining”

David Richards of Remote Goat:
“a sellout”
“a joy to watch”
“superb performances”
“a very high degree of professionalism”
“a very effective mix of the serious and the comedic”
“another triumph and a thoroughly enjoyable evening” 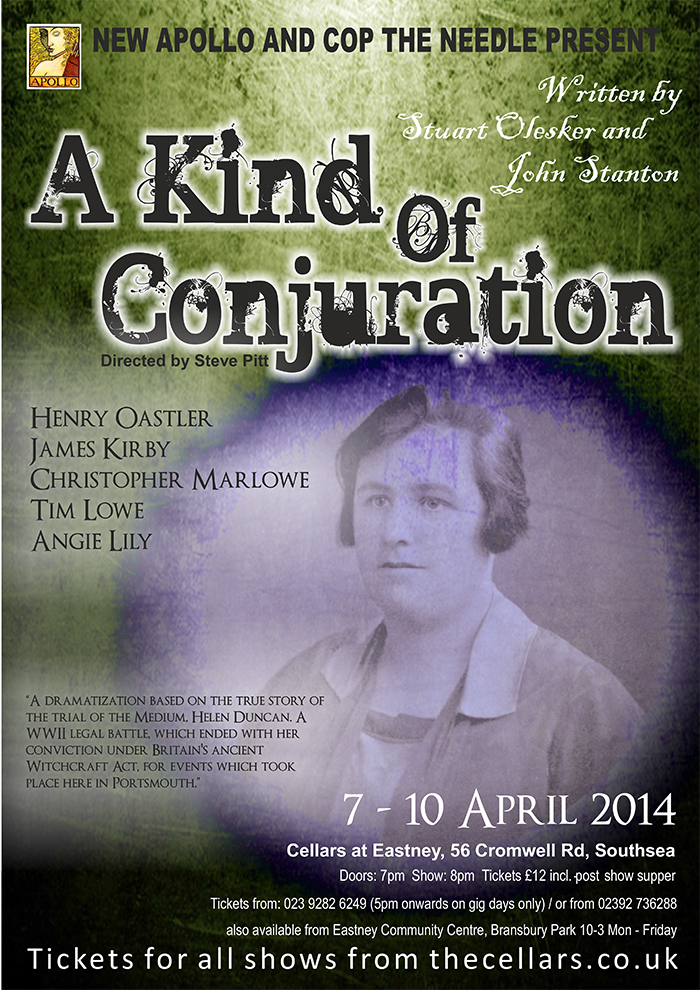 The original flyer for the show at The Cellars