Photos of MyDogSighs at Four20..

Southsea Fest & Other Portsmouth Brands Representing At The Great Escape

Our friends over at Southsea Fest this year have their first ever alternative stage at The Great Escape 16th May at The Black Dove from 14.00. The event is free whether you have a wrist band or not and the line-up includes two Strong Island Recordings acts being Boneyards who we’re going to be releasing a 7” vinyl and digital release very soon and shoegaze/grunge outfit Is Bliss. The event is headlined by Wild Smiles and also includes Dolomite Minor, Flatpack Recordings own Bloody Mammals and  Polio, B of The Bang from Pie & Vinyl Records, Axes, Unknown Soldiers,  Curxes and Sleep Committee. Make sure you head down if you’re in the area as it’s a great line up.

As well as Boneyards and Is Bliss representing Strong Island Recordings the guys who helped kick start the label altogether Arrows of Love play the main Great Escape on Saturday at The Hope, 21.45 just before Mazes at the Artrocker stage. Pick up a ‘Conspiracy Podcast’ 7”  vinyl when you’re over there.

Also the weekend features Portsmouth’s own Bear Cavalry playing Friday for the Alcopop Records! vs Big Scary Monsters Alternative Escape stage at the Pavillion Tavern on the Saturday at 17.15 and Portsmouth’s own Sounds of Sumo are represented by  Squarehead who has just released the ‘Close EP’ on SOS and he will be playing a set at Audio on Saturday eve/early morning Sunday from 2-4 am.

So over the course of the weekend many Portsmouth brands look to be very heavily represented. Some of us will be enjoying the weekend, we will probably be wearing our Drunken Sailor tee one of the days so come and say hi and make sure you help support Portsmouth on the weekend! See you there. 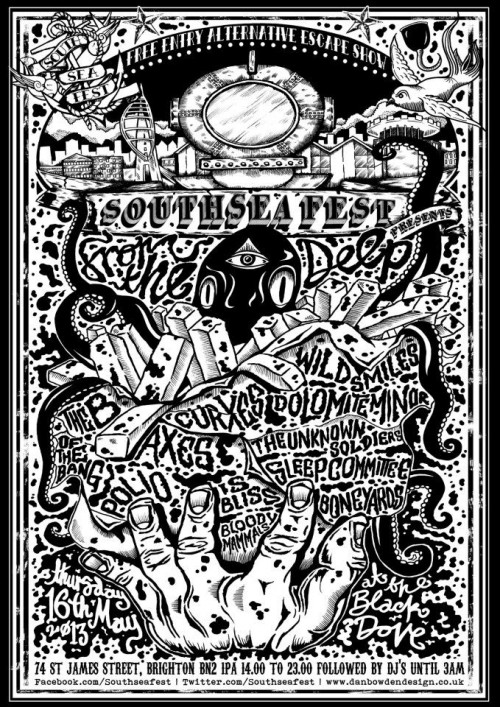