Stonemason and Lettercarver Thomas Appleton brings his Stonecarved Project to the main gallery space at Aspex in Gunwharf Quays this summer. The Stonecarved Project is about truth, status, memory and identity. Thomas has spent the past 18 months, visiting quarries around the UK, creating new work in stone showing in the gallery and on-line this August and September. We use the phrase ‘set in stone’ to define something permanent and true. But in our age of digital media, is there still a place of carving words in stone? Strong Island recently conducted the following interview with Thomas. 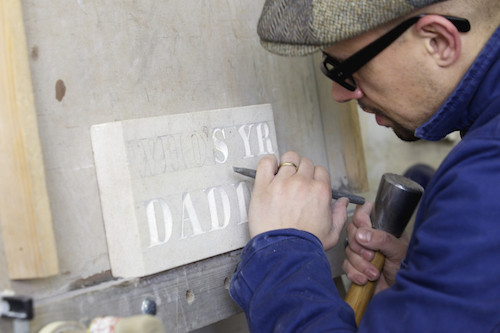 How did you find your way in to stone carving?

I was kicking around thinking about going to art school so started doing evening classes. I took a sculpture class, which included working with stone so soon I was booked on stonecarving classes and loving it. I’m naturally energetic and rather stubborn. Carving stone makes me slow down, think, and learn to work with a material on it’s own terms. There is something incredible about working with a material that is older than dinosaurs and leaving your own permanent mark. When you carve stone, every chisel cut is a discovery into a material that’s millions of years old, it’s a huge privilege.

In regards to the process, how does the time it takes to produce a carving influence your creative ideas?

I enjoy the journey of the process as much as producing the final work, so I try not to limit the idea by limiting the process and like to share the process as much as possible. I’m not into a big reveal, I like people to be able to see how work takes shape. The show at Aspex includes a time-lapse film in which I break all the rules of lettercutting. It made for an extraordinarily long process, from start to finish over seven months. If i’d stayed true to a more traditional process I could have carved it all in a day. For me, experimenting with process, while time consuming, can lead to interesting outcomes. While the show is on at Aspex, I’ll be doing some carving at the gallery from time to time so people can watch the process and how it comes together. 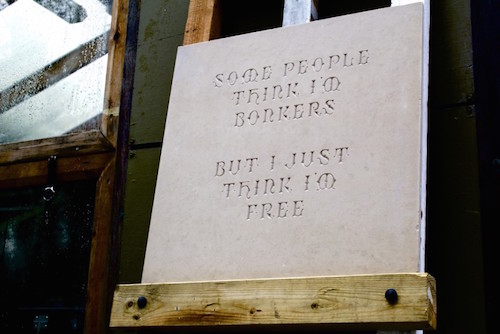 In your opinion, what does one of the oldest crafts have to offer in a world where digitally artwork can be quickly created and easily modified?

This is a really important question in my work. Does carving letters in stone still have a contemporary relevance? Yes, we use the phrase ‘set in stone’ to mean something permanent and true, but do we even notice stone carved inscriptions which have been created for social memory?

My belief is that carving words in stone is still relevant and potent, but then the question is whose words get carved… Most often, people only have the opportunity to think about carving words in stone for a grave marker. Over the last 100 years we seem to have evolved a generic language for memorialising our dead for example, ‘ forever in our hearts ‘ or ‘rest in peace’. I’m concerned that at pretty much the only time that people commission words in stone, the words people feel compelled to use are not their own but these socially expected or accepted statements. The Stonecarved project is rooted in a desire to know what words people really want to see set in stone.

What materials do you use? Where do you source them and how do they impact the work you create?

I often work with re-claimed or recycled stone. The exhibition features slates that have come from hearthstones and snooker-tables. The UK has an amazing geology which has shaped our country and how we live. I want people to reconnect with stone as an important native material. All the stone in the exhibition has come from British quarries, (many of which struggle to compete with cheap imported stone from overseas). 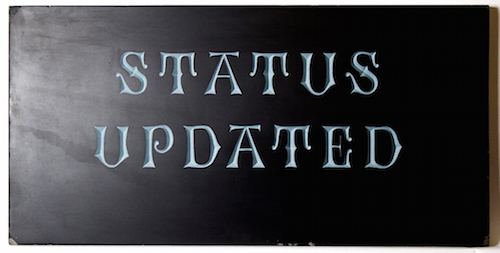 Is it important that your work is tactile? The engraved type three dimensional?

I learn and understand through working with my hands. Carving letters is really about playing with light more than touch, the shadow cast by the cuts in the stone is what makes the forms come to life.

Is there something special to the typefaces/fonts you use when it comes to stone carving, over say type used digitally?

Yes, letters caved in stone are closer to calligraphy than fonts or typefaces. The thick strokes and thin strokes in traditionally carved letters relate to brush strokes. So when designing letterforms I often start with a square-cut brush angled at 45% to understand where the weight and balance flows. The traditional method is to draw letters by hand and space them by eye. It’s a tricky business, but it allows the forms to relate to each other and the material in a what that digital type can’t

What do you see the future of stone carving to be in the art world?

I’d like to see more stone in the art world! There are incredible people working with stone, we have a wonderful resource in this country. It’s time for a new stone age.

Competition – win your own word(s) carved in stone.

Strong Island is partnering with Thomas to find the words you would like to see set in stone. A favourite song lyric, invented words you use with your family and friends. Nicknames, slang, colloquialisms – all welcome. Share your words during August using the #stonecarved and they’ll show in the gallery and on-line as part of the artwork. Next month, we’ll pick a winner who will have their words carved in stone to keep after the exhibition. To get involved tweet us here at @strongislanduk with the words you want to see carved, using #stonecarved to enter the competition

You can see the artwork as part of Thomas Appleton’s exhibition at Aspex Gallery, Gunwharf Quays, Portsmouth between 1st August and 27th September. Thomas will be in residency a few days week and also teaching a couple of letter carving workshops which you can sign up for via the gallery. We’re also planning other activities with Thomas in September. 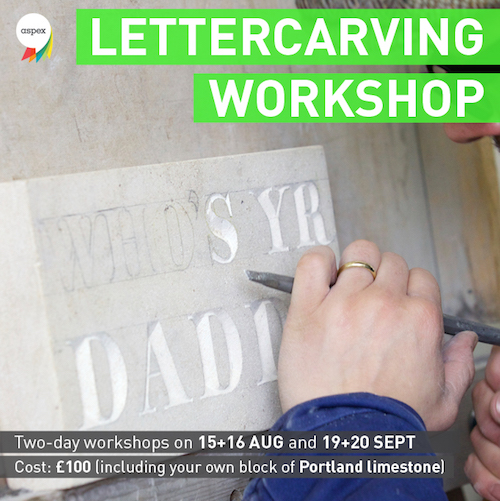 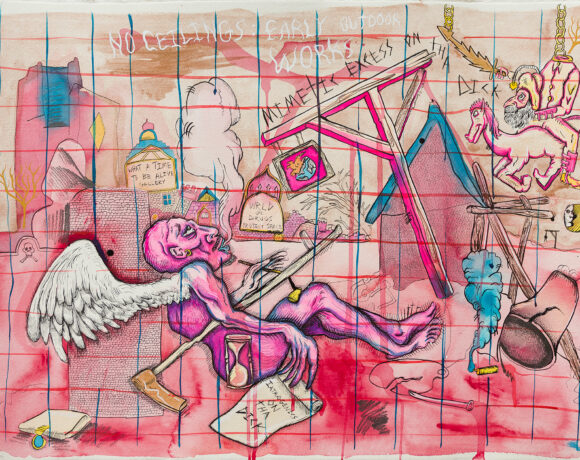