Listen Around You - Exploring ..

As you may have seen on our Strong Island Recordings Facebook page, we’re co promoting Gland Rock, a Christmas themed music festival taking place across one day in one venue raising money and awareness for local charity The Feel Yourself Campaign with Pie & Vinyl, Champagne Justice and Beach Community on the 7th December at The Southsea Social Club. Tickets are on sale in store and online at Pie & Vinyl in which you can purchase in advance here.

The line up for the event includes an astonishing 18 acts for a mere £10.00 with the likes of Esben & The Witch, Wild Smiles, Traams, Bloodsport, 1ooth Anniversary, Curxes, Is Bliss, Dead Rabbits, YSMNBWATIDemons, Ricky Fitts, Shudder Pulps and loads more. Sadly there have been a couple of changes to the line up, Halo Halo and Yoofs are unable to play but surf punk outfit Thee mvp’s who we’re releasing on our glorious ‘Treacherous Tides’ compilation on the 16th December and also post punk outfit Fever, recently in the NME as one’s to watch have been added to the line up.

We will also be serving food and there will also be prizes on the day with a pub quiz planned as well if all goes well on the day. Doors open at 12 and bands will kick off just after 2pm.

We have a playlist below of the acts playing the event to wet your appetite and the Facebook event can be found here along with real time updates on the Gland Rock Twitter account. 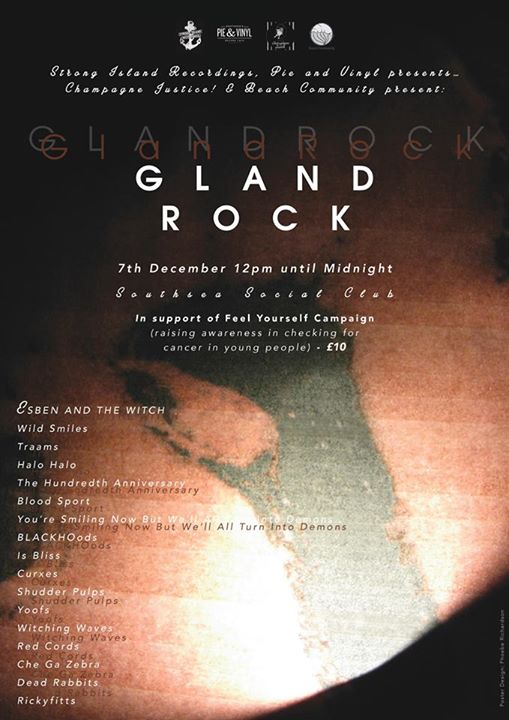