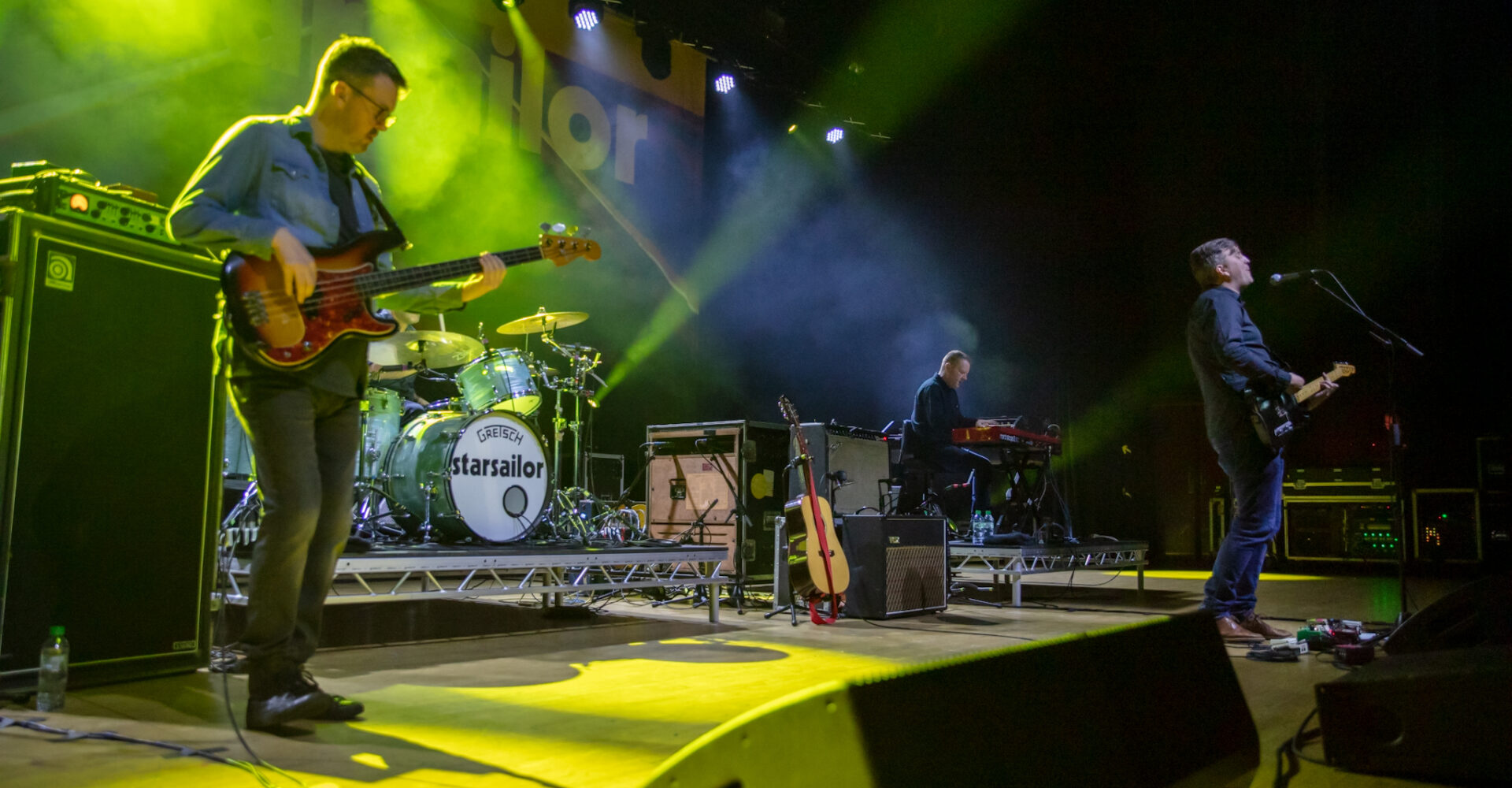 I always love going to a gig at Portsmouth Guildhall as it’s one of my favourite venues in the city and this cold, wet Friday evening was no different. Starsailor were performing their debut album ‘Love Is Here’ in full for its 20th anniversary since its release. I was really excited for this one and was hoping they’d play it in running order so that I would be at the front for two of my favourite songs from it.

As well as the main band, I was also looking forward to watching singer/songwriter Joe Hicks. Hailing from Newbury, Joe combines a mix of intricate guitar compositions with elements of folk and blues encorporated in each song, he was wonderful to watch. His lyrics were beautiful and captivated the audience with his effortless guitar playing.

After the 20 minute interval, the lights suddenly went down and the crowd behind me erupted in applause as Starsailor made their way to the stage. Opening with the first track on the record “Tie Up My Hands”, they then moved onto one of my favourites “Poor Misguided Fool” – which is what I had hoped they’d do and it was amazing to watch. They had me singing along whilst dashing around with my camera. The crowd did a great job at backing vocals on the chorus, singing every word which just sums up why it’s one of their favourites to play. Frontman, James even said that they don’t usually play that song so early on in the show but as it’s in album running order, it’s how it fell into the set and you could tell how much they loved playing it.

They continued to play the rest of the album, which included their two singles “Fever” and “Good Souls” the latter of which James dedicated to all doctors, nurses and the NHS for everything they’ve done over the last 18 months. The band looked relaxed and at ease throughout the set. For the last song of the album, the rest of the band left the stage whilst James picked up his acoustic guitar and finished with an intimate version of ‘Coming Down’ which seamlessly transitioned into a few lines of If You Tolerate This by The Manic Street Preachers.

They continued to play the rest of the album, which included their two singles “Fever” and “Good Souls” the latter of which James dedicated to all doctors, nurses and the NHS for everything they’ve done over the last 18 months.

You could tell how much it meant to them to be playing these songs again live and how some of them haven’t even been played since they’d written them back in 2001.

The rest of the band returned to the stage to an erupting crowd chanting for more. Starting the second part with ‘All or Nothing’ and ‘Best of Me’, which got everyone up and moving again. When they closed their set with ‘Four To The Floor’, everyone went crazy, (myself included) and you could see throughout the crowd, little pockets of people just having the best time clapping, dancing and getting lost in the moment.

For their encore, they played their highest charting entry, ‘Silence is Easy’ which was incredible as the crowd singing almost out did the band themselves.

Overall, watching Starsailor perform this album 20 years after it was first released, gave me full nostalgia and such a warming feeling hearing those songs live for the first time. Seeing everyone else around the venue just fully emersed in the music and the atmosphere. It was amazing to be back at this venue after the last 18 months and watching live music again, it felt so special to be a part of it.