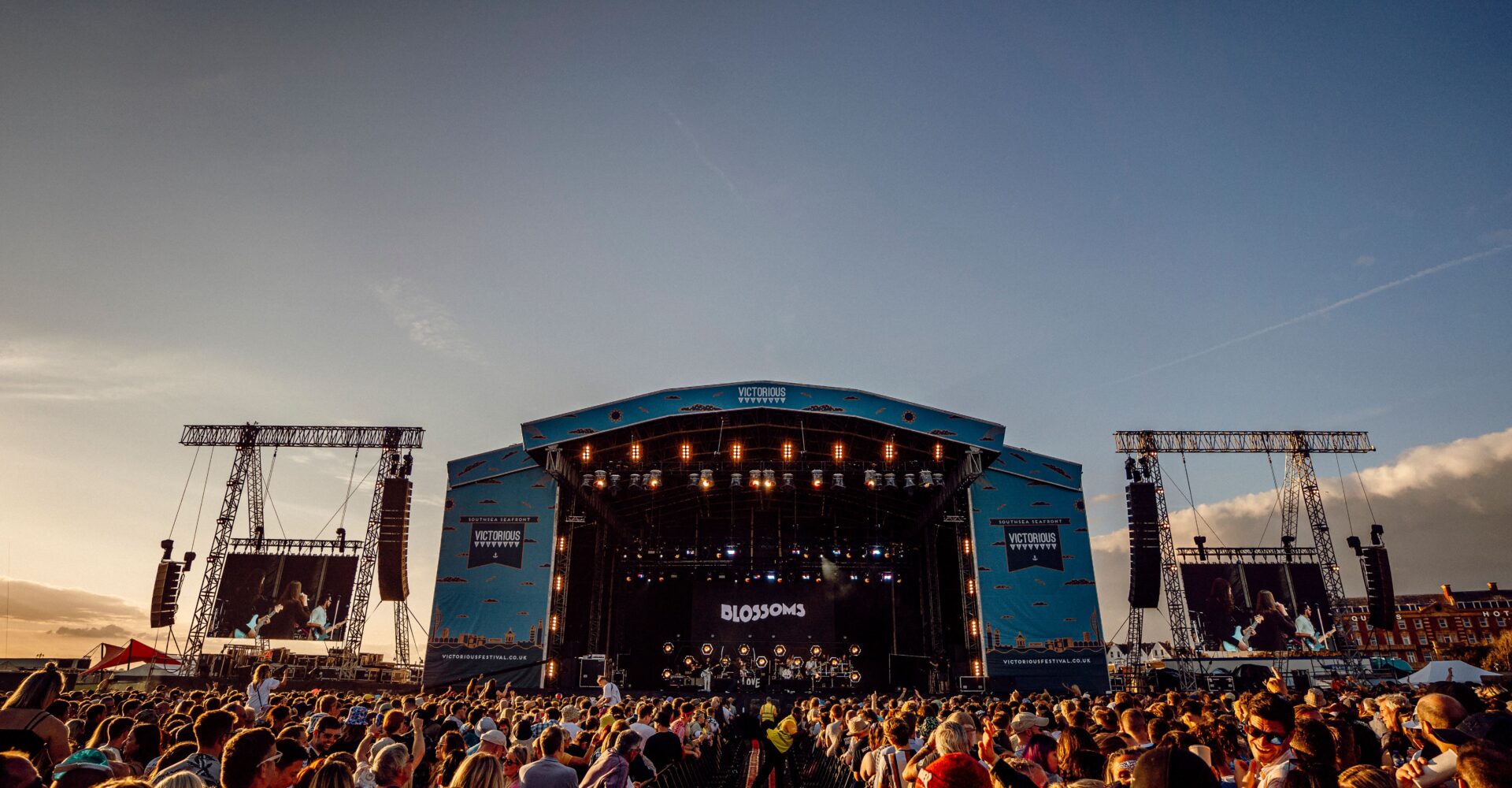 Live music, dancing, good times with friends. Victorious Festival encapsulates much of what we’ve missed over the past year or two, so we were so pleased to welcome the event back. Walking back into the festival felt like it’d had never been away, all the familiar sights were back!

In 2019 the event introduced a Friday night event where the main stage was opened with, offering an appetizer to festival goers before the rest of the site opens up on Saturday morning. This year, The Lottery Winners took to the stage with lead singer Thom Rylance ever the joker during the set with his relentless banter. The band were also being backed today by talent locals Amba Tremain, Leonie Gale and their sisters.

Russ Leggatt  managed to catch some of the set by KT Wild on World Music stage and then moved over to the chilled vibes of The People’s Lounge, where mostly everyone was lazing on bean bags and the grass. He said, “From here I caught some of the Front Room spoken word and ‘Word of Mouth’. I also earmarked the People’s Kitchen food stand to come back to over the weekend, the food looked incredible!

“Over on the Common Stage, Peter Hook & the Light were great as ever playing Joy Division and New Order numbers, personally it was a shame the set wasn’t a little longer. Feeder and The Kooks followed which was a huge nostalgia trip for me especially with it being 15 years since The Kooks first album was released. I hadn’t listened to that album for some time although the lyrics are etched someone in my mind as they all came flowing out during the set!

“Madness closed the day as headliners and provided all the hits as you would expect from a band that has been on the circuit now for the best part of 40 years, House of Fun, Baggy Trousers and Night Boat to Cairo being personal favourites.”

One of the challenges of the organisers was to accommodate the government’s recommended process of requesting that all attendees evidence a negative lateral flow test prior to entry and on the whole, the feedback was positive with many citing a smooth and well-organised entry.

Louise, the Southsea Wanderer, explained to me, “I’ll admit, I was a bit apprehensive about Victorious Festival this year. Not due to the pandemic; but because shortly after the last festival in 2019 I was hospitalised with a rare condition and my energy levels and mobility hasn’t been the same since. Instead of the usual three days, I booked only one.

“I shouldn’t have worried though; the great thing with this festival is the proximity of it all. Set within one of the most densely populated cities in Europe, all stages are within easy walking distance of each other, neatly tucked into the seafront and common areas. Food, drink and loos are within easy reach and market stalls are around every corner.

“The spacing felt great too – I mean, you could get in the thick of everything at the front of the stage if you wanted to, crammed cheek-to-cheek, but the music quality was still really good at the back of each arena where there was space to sit and chill. In terms of big hitters on Sunday, Annie Mac and Royal Blood were on my must-see list – polar opposite in terms of music styles but equally guaranteed to get you moving. And move I did.

“I may have crawled home with exhaustion and spent the whole next day horizontal, but it was so worth it.”

On Saturday the crowd gathered at the Common Stage Arena and a wave of nostalgia came over the crowd as Craig David took to the stage. He has certainly come full circle, from the young RnB star in the late 90’s, to DJ, MC and international collaborator. What was astounding was how much content, music, beats, and shapes were squeezed into 45 minutes on a Saturday afternoon that set the bar and vibes high mixing own hits like 7 Days with covers of Jump Around & Whitney Houston. Pure Genius!

There really is something for everyone at Victorious, from headline acts and cultural sounds to impressive local talent. Again a big favourite of ours was The People’s Lounge. It is easy to get drawn to the bigger stages with so many headline acts, but the talent certainly extends beyond there.

Speaking to the organisers, they told us that the prospect of putting on a smaller reduced event never entered their thoughts. It was always about putting the biggest event that they could feasibly put on given the circumstances. Given all the adversity, they should be proud of what they have been able to achieve.

Nile Rodgers and Chic – “They sent shivers down my spine as they performed on the Castle Stage, beneath Hollywood-esque Victorious sign. As I looked around me, I was surprised at how many people were younger than me, given that most of these songs debuted in the 70s or 80s, when my own parents went out dancing. I asked a couple of teenagers what brought them to this stage “I grew up listening to this”, they said. Seeing people of all ages come together and dance to some of the best disco music of all time was truly incredible.” Helen Newman

The Streets – “Mike Skinner was on fine form, baiting the crows with Southampton references and also handing out champagne to the fans at the front of the crowd.” Russ Leggatt

Pigs, Pigs, Pigs, Pigs, Pigs, Pigs, Pigs – “Sunday was the day of the festival that I had been looking forward to since the line-up was re-announced. Friends and I started the day by arriving for the mighty ‘Pigs, Pigs, Pigs, Pigs, Pigs, Pigs, Pigs’ (or Pigs x 7), their album ‘Viscerals’ was one of my favourites from last year. I knew that they would be loud but man, did they wake me up from the previous day’s tiredness! Completely full-on, in your face, wall of sound that prepared my ears for what was to come later in the evening with ‘Royal Blood’. Lead singer, Matt, had some cracking humour about spending out on a big-budget Pigs x 7 banner, only to be told by the organisers of the festival that they had them covered, queue black screen with Pigs x 7 written in white! Obviously, Matt and the band saw the funny side of this and were incidentally saved by another fan who had drawn their own banner, on the back of a Victorious map, which made its way up onto to stage to sit proudly in front of the drum kit!” Russ Leggatt

Grub (Ed’s Bangers and Tenth Hole Mac & Cheese) – “Victorious isn’t just about the music, the food also compliments the weekend, and it’s great to see local businesses are well represented. For premium ticket holders, Ed’s Bangers spoiled punters with luxury locally made sausages, gravy wrapped inside a Yorkshire pudding, whilst the Tenth Hole delivered the ultimate in comfort food – Mac ‘n’ Cheese – kudos to the entertaining staff having way more fun inside the tent with their own party!” Graham Brown

Supergrass – “Not since 2005 had I seen Supergrass play and that ended up being 3 times in the space of 3 months, so it was great that they were playing this evening on the Common Stage after a brief hiatus. Their set was such a great nostalgia trip with them playing the likes of ‘Lenny’, ‘Moving’, Richard III’, ‘Mansize Rooster’ and finishing the set with ‘Caught by the Fuzz’. One thing I had forgotten is how good of a drummer, Danny Goffrey is, a one point I thought his drum rising was going to collapse such was the ferociousness of his drumming!” Russ Leggatt

The World Music Stage – It wass certainly worth a stop with The Dhol Foundation, it left me with a welcomed ringing in my ears. I never thought I’d find myself raving in the car park next to the D-Day Museum loos, and it took me a while to realise I was actually in a car park, the atmosphere was electric.” Helen Newman

Clarke Reynolds (Portsmouth’s Blind Braille Artist) – “It wasn’t just the bands that amazed the crowd, local artist Clarke Reynolds is all the more extraordinary as he is Portsmouth’s blind braille artist; who in conjunction with Seekers Create and National Lottery Heritage Fund set up a stunning chalk Braille trail across the Victorious site which was inclusive for everyone, and helped start conversations and raise awareness of how art can challenge and change perceptions.” Graham Brown

It has been a difficult eighteen months for every single person on the planet. It has tested our resilience and a forced us to pull together as a community. The organisers of Victorious Festival know that only too well. They have faced much uncertainty in the build-up and knew that at any time all of their hard work could be for nothing if the government decide to pull the plug on large gatherings.

The organisers had to fight in order to get their hands on portaloos with so many being hired out to COVID testing sites across the country and with other festivals pushing their event back to the latter stages of the summer it meant sharing them around. Many of the vendors also suffered with supply issues caused by the changes in the import process brought on by Brexit.

Speaking to the organisers, they told us that the prospect of putting on a smaller reduced event never entered their thoughts. It was always about putting the biggest event that they could feasibly put on given the circumstances. Given all the adversity, they should be proud of what they have been able to achieve.

Helen summed it up beautifully when she said, “As the sun was just about to disappear over the horizon, I stood at the top of the hill overlooking the iconic bandstand and glanced around me. Wow. “What an amazing place I’m lucky enough to call home”, I thought. Victorious does the perfect job at showcasing that. I walked 58 kilometres over the course of two days. Tired eyes, sore feet, and not much voice left, I woke up Monday and asked my partner “Would you do it all again today if you could?”. Yes. No question.”

We recommend that if you are thinking of returning next summer then you take advantage of the early bird discount tickets which are available now from the event’s website which is linked below. Early bird tickets start at £40 for adults, as well as payment plans available for as little as £4 per month.