Picture Box an Exhibition of P..

This Thursday both us at Strong Island Recordings and also our friends over at Pie & Vinyl takeover Bleach in Brighton for the day for a Great Escape party and one of the biggest shows both of us have hosted so far. Anybody who has been to Southsea Fest and visited the Pie & Vinyl or Strong Island Recordings stage will know what to expect. The day is also being sponsored by the kind folk at Old Blacksmiths Studio who will be providing us backline for the day helping reduce outgoing costs for us massively. The event is free to Great Escape wristband holders and just £4 for all day without to help recoup costs.  You can check out the Facebook event here.

The second in our preview features the rest of the acts playing the day:

Fuzz don Theo Verney has played a couple of Strong Island Recordings shows in the past including his first show outside of Brighton and London back in August 2013 and The One Eyed Dog. That was during the release period of the riff riot that was the Heavy Sunn EP on Hate Hate Hate Records the former home to The Wytches, Fat White Family and Kagoule.  Theo Verney’s latest effort ‘Mountain Rose’ and also ‘Brain Disease’ that was premiered on Fake DIY yesterday showcases a much more refined Theo.  If you leave a Theo Verney show without feeling like you’ve taken a piledriver to your neck then you were probably just at the wrong show. Catch Theo Verney at 10.55pm.

Hailing from Melbourne, Australia; it’s fair to say Flyying Colours have come a bit far to play The Great Escape Festival. The psych/shoegazers create a luscious yet visceral wall of noise that crashes down upon you. Their latest EP was released on the excellent Club AC30 yesterday. If you dig MBV, Slowdive, Swervedriver etc then Flyying Colours are for you. This is their only Alternative Escape show where a Great Escape wristband isn’t needed and one of their last on their UK date so make the most of it. You can catch Flyying Colours at 10.00pm.

Mancunian outfit Man Made create scuzzed out indie meets post punk topped in brain melting, grunge tinted basslines. The guys are set to dominate the festival season this year and recently had their latest 7″ single fly out off of shelves upon Record Store Day. You can catch the guys at 9.05pm at Bleach.

Strong Island Recordings label family Gang are quite simply put one of the most exciting new bands in the UK. Brighton at the moment is churning out some incredible new bands from Demob Happy, The Magic Gang, The Wytches, Black Honey to Theo Verney above and Gang are the latest grunge ridden psych band from Brighton to be unleashed.  The doom pop trio have released a couple of EP’s over the last year with Sandscrape on Strong Island Recordings and also ‘Silverback’ on Sexx Tapes. You can catch Gang at 8.10pm.

Brighton’s Morning Smoke are one of our favourite new bands. Combining intense shoegaze and aspects of post punk, the quartet leave the audience pulverised from their immense wall of sound during live shows. Thier recordings capture their live shows charm which leaves you wrapped around in a coil of noise whilst gorgeous textures whirl by. In a way they remind us a lot of our own Is Bliss (RIP?) which is a great thing indeed. You can check out ‘Unknown’ that was premiered just yesterday and you can catch the guys at 7.20pm at Bleach. 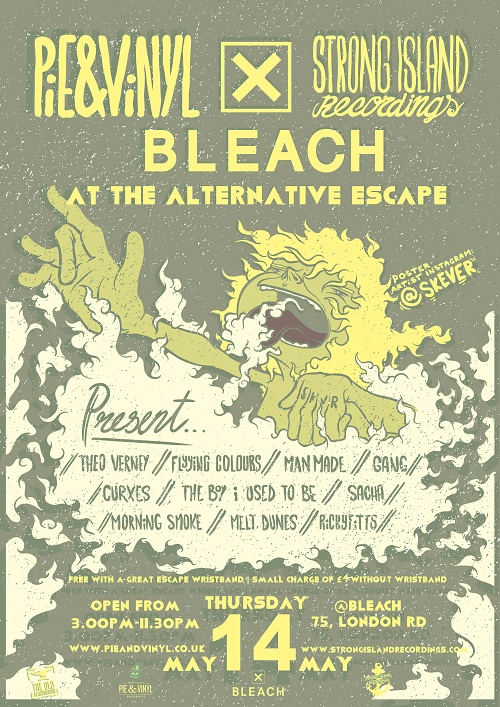