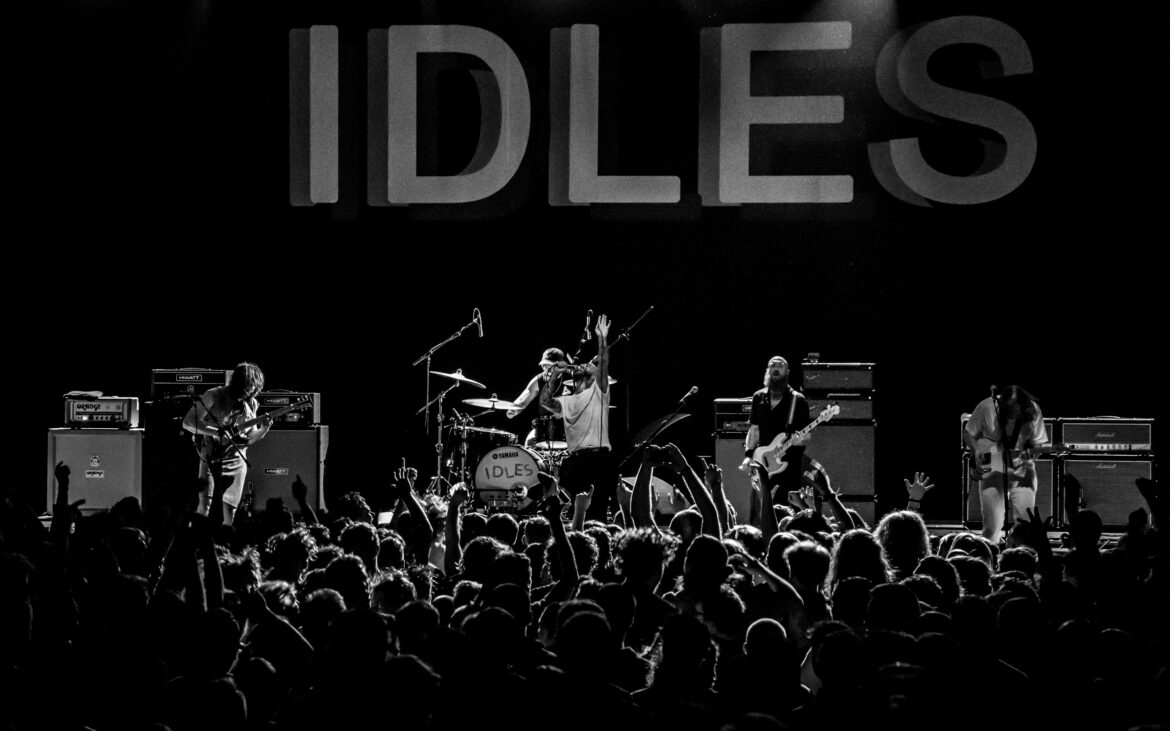 I couldn’t believe it when I first saw that Idles were going out on a record store tour and that they Pie & Vinyl would be putting on a gig at Portsmouth Guildhall! Last time I’d seen Idles was the previous out store that Pie & Vinyl held at The Wave Maiden which was a tight squeeze even for the small crowd present! Idles for me are one of those bands that have got me through the various lockdowns we have experienced over this last 18 months or so. Their music for me has narrated the current societal landscape that we find ourselves in, not just now, but over these last few years! Showing support with their music for NHS workers, refugees, equality and approaching subjects like mental health, head on.

Idles are more than just a band though, it’s a community. The AF Gang group on Facebook is now 31k members strong and is made up of Idles fans from all over the globe. An invaluable resource for most to come and be seen, be heard, be supported, show and share love amongst many other things. I’d seen via the group that an AF Gang meet up was being held at The Fleet prior to the gig, most, if not, all Idles gigs include some kind of meet up. Spare tickets are usually shared for free and those flying solo at the gigs meet up to make friends, as well as old friends coming together.

It felt like most of Portsmouth/Southsea was at this gig tonight with the amount of people that I bumped into in and around the venue. There was no support act tonight so we had to wait patiently for over an hour from doors for Idles to arrive on stage, with the energy in crowd building and as always it was worth the wait. This energy was met by the band full on with the opener ‘Colossus’ which builds and builds to the point of explosion with the mosh pit completely going off. I would of loved to have been diving in the middle of the pit myself. At one point I felt something go past the back of my head and it was just guitarist Lee launching himself into the crowd, guitar as well, to join everyone. This would just be the first of his many adventures during the set.

The set was an even blend of their work from all three albums and it was great to be hearing the ‘Ultra Mono’ work out in the live environment especially ‘ Reigns’, ‘Anxiety’ and ‘Mr Motivator’. ‘Love Song’ is Bobo’s turn to venture into the crowd to serenade everyone with his renditions of Mariah Carey numbers ‘Hero’ & ‘All I Want for Xmas is You’ along ‘Nothing Compares to You’ and ‘Wonderwall’, whilst Dev and Jon keep the song going and Joe joining in the serenading as well.

All in all this was a splendid night which left me leaving even more thankful for live music!

Idles have recently just announced their follow up album to Ultra Mono; Crawler will be released on 12th November with all formats available at Pie & Vinyl.