At the beginning of August, Aspex presented a call for proposals for an original piece of art at the Aspex Guildhall. They are now pleased to say that Ilse Black, a visual artist from Bournemouth, has secured the commission to produce a dynamic and engaging large-scale wall drawing for the gallery.

The artist will be creating a 3D piece entitled ‘Cut Loose’, using red and cyan ink. The progress of the piece will be open to a live audience and viewers will need 3D glasses to see the artwork in all its glory. The finished piece will be displayed in the basement exhibition of the Aspex Guildhall for one year.

Black said: “To look at the drawing without the 3D specs, it appears as a series of small red and cyan parallel lines, possibly with some reference to perspective. When viewed with the 3D specs, the drawing transforms into a three dimensional spatial intervention. The lines appear to float off the wall, and some seem to recede from the drawing plane. This is manipulated by spacing between red and cyan lines, and by which colour is on the left and which on the right.”

Members of the public are invited to see the artist producing her artwork live on site on the following dates:

Ilse Black graduated from Arts University Bournemouth (AUB) in 2010 with a BA (Hons) degree. She has since showcased her work at several prestigious exhibitions and competitions, including the Threadneedle Prize, The Royal West of England: Drawn 2013 and The National Open Art Competition 2010 and 2011, where she was awarded the Best from the South West.

Also exhibiting at Aspex Guildhall is Portsmouth based artist Tanya Wood, displaying a series of fine art drawings. These can be found in the Ground Floor café of the historic Guildhall building. 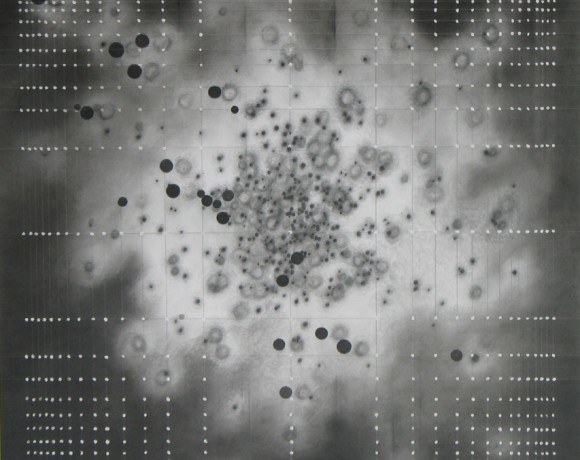