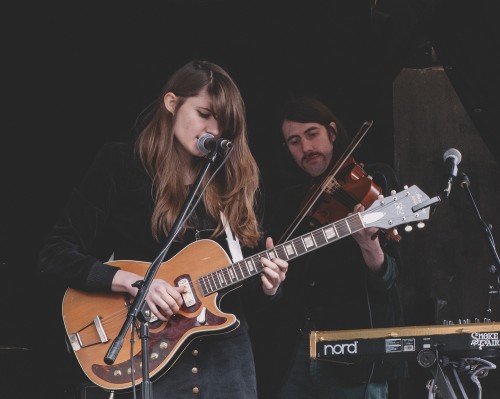 This Saturday saw Castle Road become a focal point in the city for vinyl and live music with Record Store Day taking over the whole street. With the earliest ever queue starting outside Pie & Vinyl on the Friday afternoon through to Saturday morning’s line of people running up Castle Road to the Barley Mow before 8am, the anticipation for the now annual day of celebrating independent record shops was stronger than ever. With the street closed off to traffic with a main stage at the top and a small performance area outside Pie & Vinyl, live music kicked things off as the doors opened and people got their teeth in to Record Store Day special releases from bands such as The Charlatans, Manic Street Preachers and more. Down the street were different stalls from many local businesses, from food & drink (such as Bread Addiction) to local creatives (such as Angela Chick) to local record labels like our own Strong Island Recordings, the street was packed. All the shops along the street also got heavily involved too, with a fantastic atmosphere and 1000s filling the road throughout Saturday and on the Sunday too.

When it came to the live shows, people from all over Portsmouth and further afield got involved as bands such as Smoke Fairies, Plastic Mermaids and even a reformed Emptifish played sets. Band of Skulls were arguably the biggest name to play on the day, with a stripped back acoustic set of current and new songs.

No doubt Record Store Day in the city has grown hugely in the last few years, excited to see what happens in the future too. Props go out to the crew at Pie & Vinyl and the rest of the organisers for all their hard work on creating a really positive community event with a passion for music at its core. Goes without saying too that just like dogs aren’t just for Christmas, your local record stores aren’t just for Record Store Day, hit them up for your music fix and keep them going strong.