Dwellings Exhibition by When W..

This Saturday The Dub Pistols will be continuing their UK tour at The Wedgewood Rooms in partnership with Beats & Swing. The bands lead singer has kindly taken the time to chat to me about all things…

– Could you tell our readers a little bit about the formation of the Dub Pistols and describe your musical style and inspirations?
I started the band in 1997 more as a DJ sound back then inspired at the time by the earliest Chemical brothers tracks, that turned into the so called big beat sound at the time and over the years it has mutated into a band fusing the sound of Dub, hip hop reggae and electronica.

– For those who might be new to the Dub Pistols which three tracks from your back catalogue would you describe as your favourites?
Having recorded 6 studio albums picking only 3 tracks is hard so here you go…
“Peaches”
“Gangsters”
“Return Of The Pistoleros”
“Six million Ways to Live”

As you’ve gained recognition as one of the UK’s premier live acts, has it changed the way you approach shows as the audiences have grown?
Not really we have always given a full throttle show that has just got better over the years as we have grown as musicians and have gained more experience and understanding of how a live show should work, it also helps that our catalogue of tracks has also grown to 6 albums so we have a lot of tracks to choose from and switch things up if different situations arise

Over the years has yours and the Dub Pistols approach to touring changed and if so how?
Well we tour more than ever now so partying all night every night isn’t possible, i think when you a younger the party is the priority but as you get older and wiser you realise the show is the most important part of the tour.

You’re one of the hardest working bands on the UK festival circuit, what do you do on your spare time to relax?
Spare time whats that? when we are not touring i tend to be either out doing DJ shows or in the studio making music so i get very little down time but i guess going out for a nice meal or watching football.

Yourself and the Dub Pistols have a big online presence, how has the growing online following brought you closer or further away from your fans?
Social media has probably saved our career because back in the old days if you were not on radio you could easily loose contact with your fan base but with the rise of social media people can see what your up to all the time and you have a lot more interaction with each other so it really has been a positive development.

You will be returning to Hampshire in July for Blissfields festival. This will be Strong Island’s fifth year working with Blissfields and as regulars on the line up can you tell me about what you look forward to most when returning for your annual performance? Blissfields wouldn’t be the same without you!
we have become part of the Blissfields family, it’s a great festival and a great team,right from the programming of the bands by Paul & Mel who are both really passionate about music and have always discovered up and coming bands that have gone on to be massive such as Bastille through to the dance tent which this year i will also be making my DJ debut in, the weather is always brilliant and the crowd is a real mixture of young and old the vibe is electric it really is an amazing weekend and i feel very honoured to be part of it, if you don’t know get to know believe me you won’t be sorry 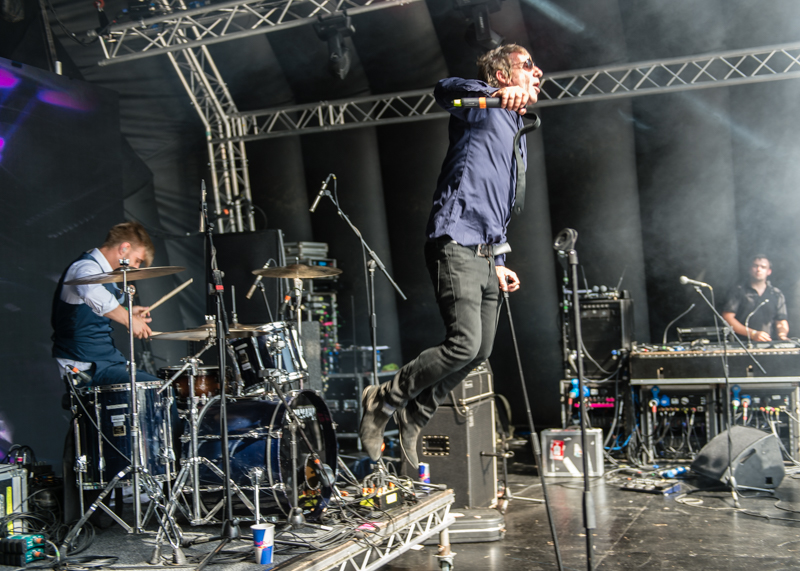 Barry and The Dub Pistols at Blissfields 2015 by Tony Jupp

– You have collaborated with a host of talented vocalists over the years including Rodney P and Terry Hall. Are there any others who you have on your radar that you would still love to work with?
Well I’ve been lucky enough to work with so many of my heroes over the years as you mentioned the list is endless and on our forthcoming album i’ve raised the bar again with the likes of Beenie Man, Cutty Ranks, Earl 16, Navigator, Ragga Twins, Seanie T and Lindy Layton all recording tracks for me

I still would love to work with Ian Brown and Roots Manuva amongst others somewhere down the line.

As a big football fan you will be aware of Portsmouth Football Club’s reputation for having the best fans in England. One of the club’s most famous matches was the 1991/92 FA Cup semi final and the replay. Being a Liverpool fan, do you have fond memories of those games or any of the more recent Liverpool and Portsmouth matches?
I wouldn’t say fond memories as at the time Liverpool were supposed to be a far superior team and in that match we needed extra time and penalties to win it!

Tickets are selling fast so if you want to join Barry and the rest of the Dub Pistols then you can get hold of your tickets from the Wedgewood Rooms online or from the box office. On the night support with be coming from local band Zegema Beach who are coming back after a three year sebatical as well as DJ Tom Mayhem and Basement83.