Ten Years In A Portsmouth Slum – New Book Re...

Hi everyone I’m very pleased to introduce myself as the new Strong Island shop manager and I’ll be featuring some of our products on here over the next few weeks. After the popularity of Portsmouth Fairy Tails For Grown Ups we were eager to stock a new book Ten Years In A Portsmouth Slum from Pompey publisher Life Is Amazing. 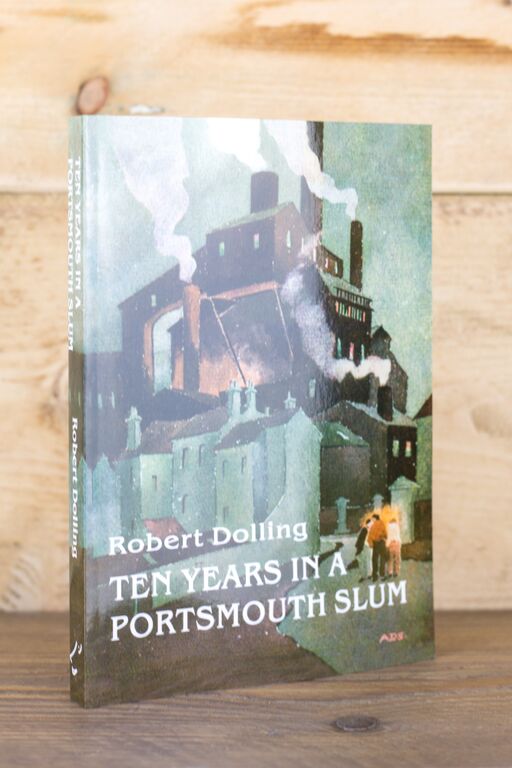 “Originally published in 1895, the book tells the true story of Father Robert Dolling, a priest sent to perform missionary work in Portsmouth after his successes doing similar work in Stepney, London. Dolling arrived in Portsmouth in 1885, and was immediately thrown into the rough, violent and impoverished world of the narrow streets and courtyards around Conway Street, which used to stand between Charlotte Street and the Dockyard wall. His stories of local people are funny, shocking and surprising.

The sight of a “Landport Dance” in the town on his very first day would have shocked more modest Victorians. A teenaged boy and girl had swopped skirts and trousers and were dancing topless in the streets in front of a large crowd. One woman in the crush was so drunk she fell down, and when Father Dolling reached down to pick her up, he was greeted by a shower of stones from the crowd, who clearly didn’t like priests meddling in their business. Only when a sailor stepped in and told the crowd to leave the “Holy Joe” alone did they stop. Later, a younger girl who was in his Sunday School explained that the girl dancer was a prostitute who had basically been advertising with a client. The younger girl knew this because because she worked as cleaner in the “bad house” where the older girl plied her trade. The younger girl was eight years old.

It was an introduction to a world filled with vice, violence and also deep laughter. Dolling worked to bring out the more civilising aspects for his parishioners, concentrating less on religion and more on their earthly needs. In his time he set up a gymnasium for the children and young men, a dance class to bring finesse into the rough courtships of the young men and women, and even a knitting circle and tea party to encourage the strictly clannish women to talk to those from other streets. He recalls the old ladies he took on an excursion to the Isle of Wight getting drunk and playing skipping on the pier when they got back, and the men he took on a trip to a wealthy benefactor’s house in Winchester, whose orchard they stripped of apples.

Dolling himself personally raised a subscription to replace the dilapidated church of St Agatha’s Landport, and though the streets were wrecked by the Conway Street Bomb during the Portsmouth Blitz, the church he built survives to this day – a lone testament to the extraordinary work of this man over a decade.

It’s a true account of an area long gone that drips with the authentic essence of Victorian Portsmouth. Tough, funny, vibrant and rich in local detail, Ten Years In A Portsmouth Slum provides you an insight into Portsmouth life you won’t find anywhere else.” – Matt Wingett, Life is Amazing

Not one to miss and I personally can’t wait to find the time to read it all. Available in store 12 Highland Road, Southsea and online www.strongislandclothingco.com