The History of Aspex Gallery in Portsmouth – The Beginning

Art writer & curator, Laura McLean-Ferris, has recently been crawling through the Aspex Gallery archives and has produced a series of articles for aspex about their 33 year history. We’re very happy to partner up and cross post their aspex history blog posts here on Strong Island, you can see the original aspex blog post HERE. The first in the series today looks at the start of aspex, we will co-publish the other articles during the coming weeks.

Towards the end of the 1970s a small group of teachers and former students from the art department of Portsmouth Polytechnic (now The University of Portsmouth) came together to create an artist-run space, comprising studios and a space to show work. Artist-run spaces are now recognised as crucial to the artistic ecology of the country and are known for their exciting, subversive and inventive approaches to programming that tend to be focused on other artists rather than on art collectors or the general public, and these small organisations are often able to create small, yet flourishing, artistic networks. Yet the tradition of the modern artist-run space is still quite new, and developed out of the conceptual discussions around art in the 1960s.

It’s important to set the wider scene in which this organisation, titled Art Space Portsmouth (ASP), emerged. Across the country and internationally, artists began to understand that in order to show their artwork they might be better to take matters into their own hands rather than waiting to be accepted by what were then rather conservative institutions. In New York an alternative scene had been flourishing during the 1960s, and spaces such as The Kitchen and P.S.1 opened early in the 1970s. Inspired by a visit to New York, artists Bridget Riley and Peter Sedgley opened SPACE with Peter Townsend in 1968, and inspired waves of activity in the UK and internationally. Other important spaces such as Matt’s Gallery was opened in 1979, and Transmission in Glasgow was initiated in 1982. 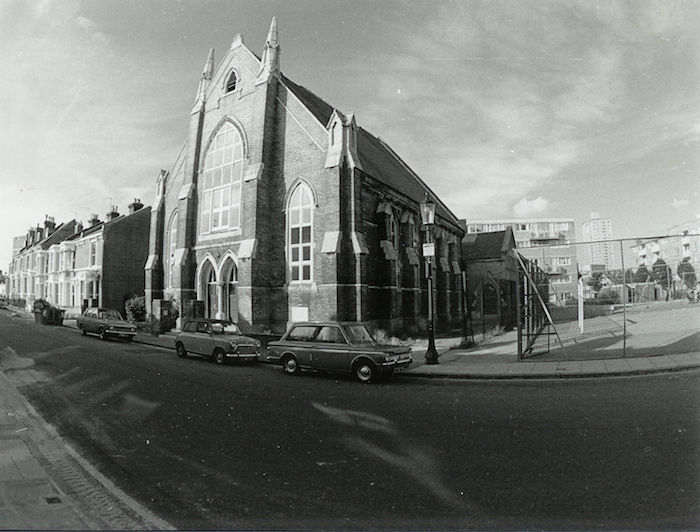 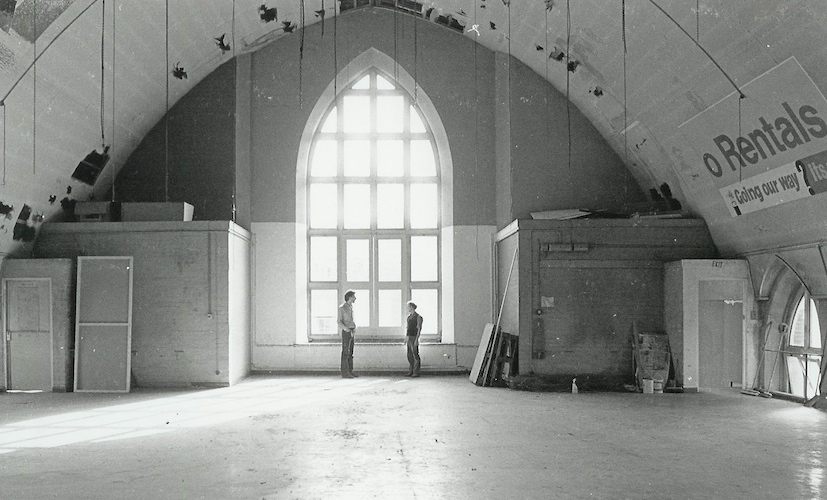 Above: aspex‘s original home in Brougham Road, Southsea alongside ASP (who are still there today)

The conceptual art movements of the 1960s, alongside broader countercultural movements and student protests, began a sea change in the public’s response to art, the effects of which would only be felt decades later. In the UK the ‘Tate Bricks’, controversy had taken place only a few years before ASP opened after The Daily Telegraph ran a scandalised article following the Tate’s purchase of Carl Andre’s Equivalent VIII (1966), a minimalist sculpture composed of firebricks. The British media was generally somewhat hostile to contemporary art, and yet this was the beginning of an era in which the public was beginning to take notice of the work of living artists. 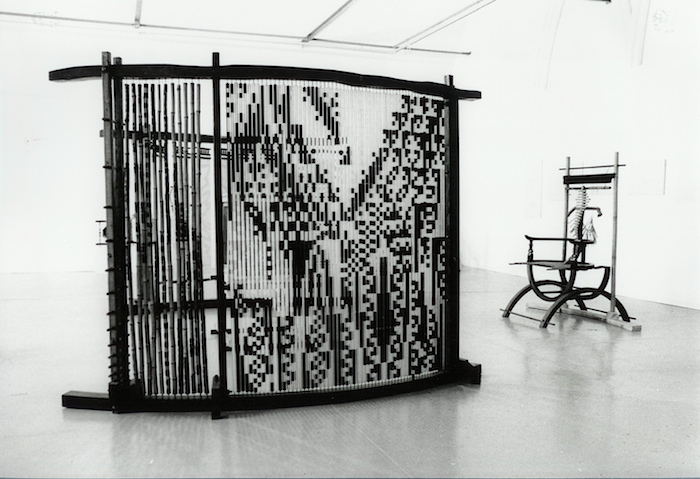 After two years of working together ASP opened Aspex Gallery in 1981. The exhibition programme initiated by the artists was incredibly forward thinking and ambitious with many important exhibitions by sculptors in particular. In 1982 Mona Hatoum, then reasonably little known, created an intense performance work based on Palestinian identity for an all female exhibition Reflections (image below), devoted to the work of women, in which the artist performed naked in a shower-like cubicle, smearing red paint on the transparent panes to obscure her body from the viewers, an experiment in which one can see the genesis of the video work Measures of Distance (1988), features footage of her mother in the shower, and for which she became well known. 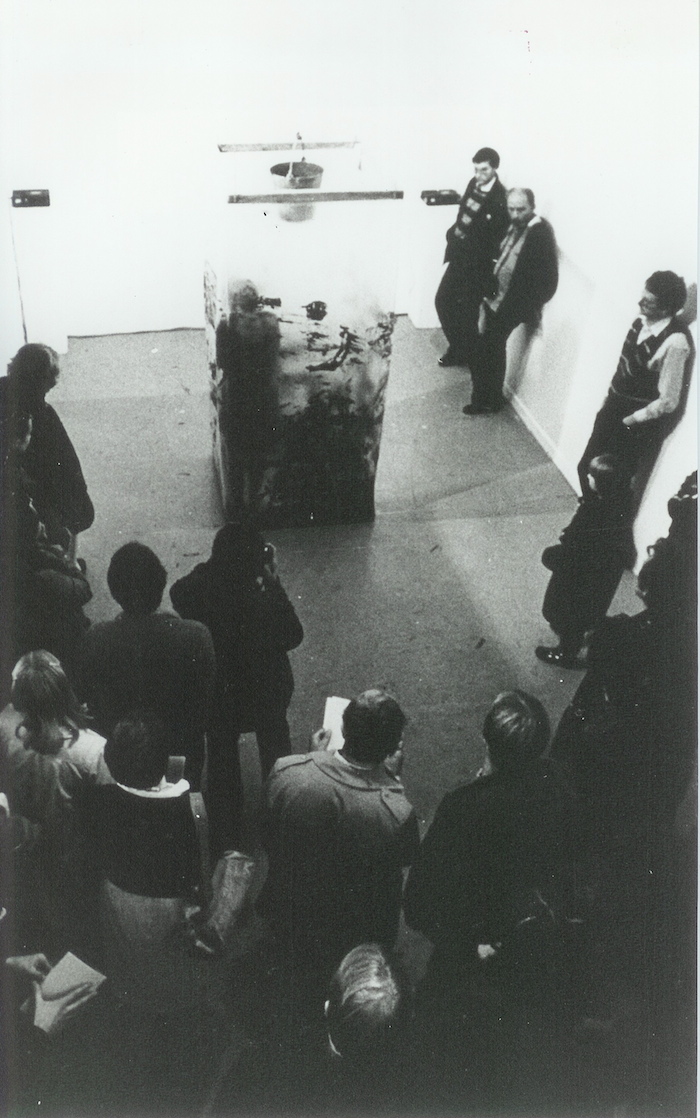 The performance was picked up by The Sun (article below), which attempted to turn the performance in to a scandal with quotes such as ‘Someone wants their knuckles rapped’. The riskiness and vibrancy of the programming is evidence of the way in which the artists and the gallery offered support to artists at crucial moments in their careers during this time. 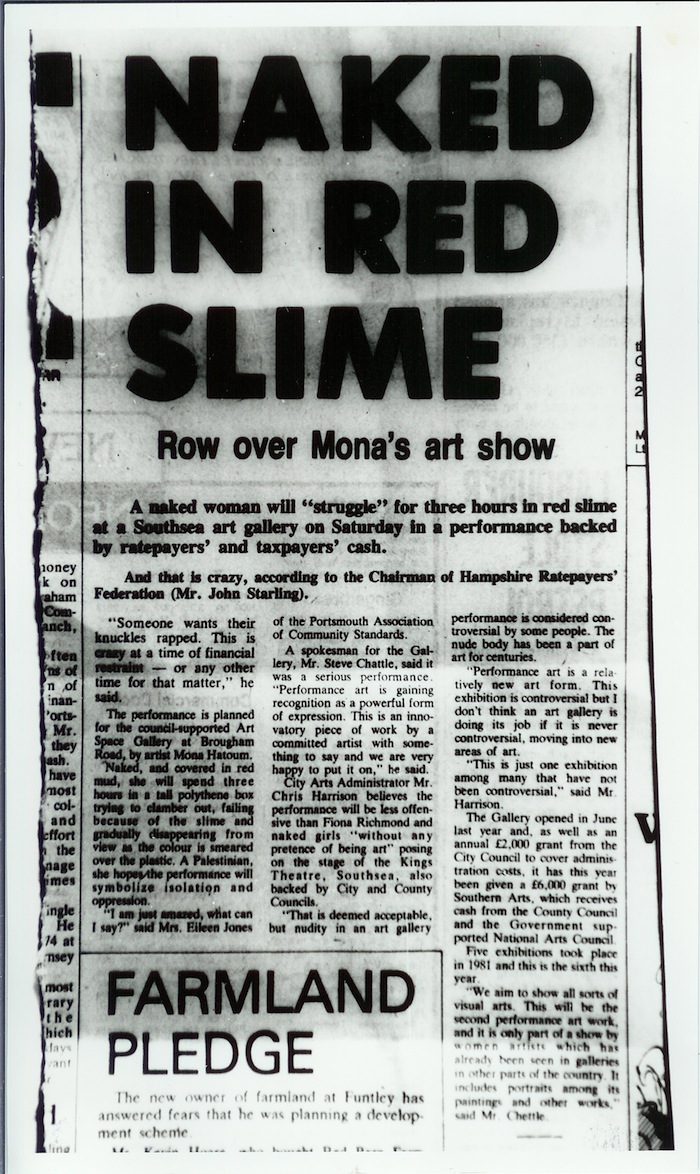