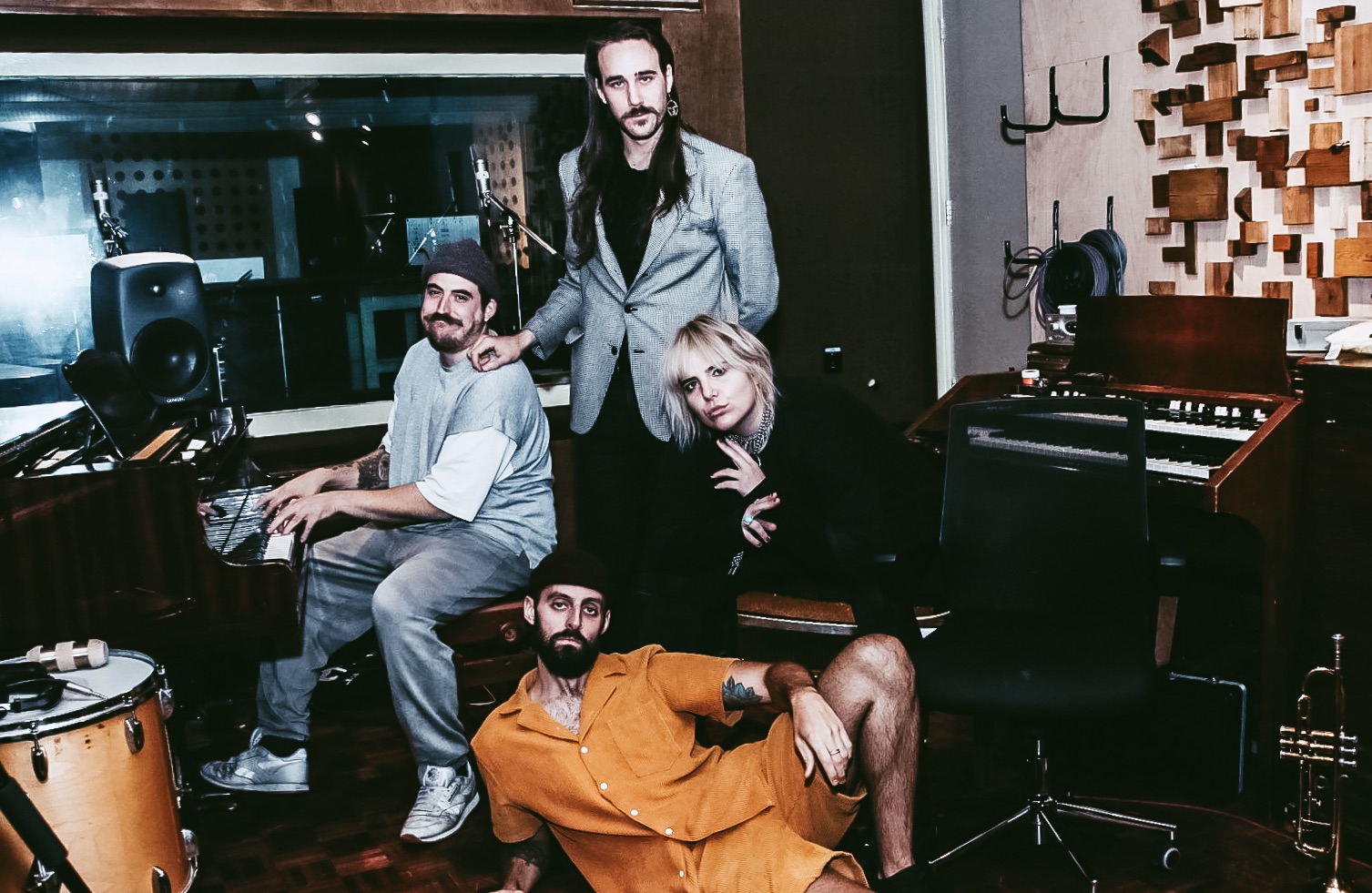 Yesterday, Wednesday the 7th October 2020 I had the pleasure of meeting up with Brighton based band the incomparable LibraLibra at the popular Echo Zoo Studios in Eastbourne which has played host to household names including James Bay, Miles Kane and Natalie Imbruglia.

I arrived to the joyous sound of the guys thrashing out some of their unique and fabulous sounds and hearing Beth’s powerhouse vocals which are a wonderful combination to me, of a Kate Bush and Beth Ditto fusion, was literally music to my ears and a very welcome twang after it being so long since hearing live music thanks to this pesky pandemic!

The band started as a duo when couple Beth Cannon (lead vocals) and Joe Caple (digital wizardry/sound engineer) after being a couple for several years decided to start writing music together in 2018.

Beth said, “It just clicked and from that it was pretty instant and we just said, we need to get a band together because we didn’t want it to be just us two, we wanted the full band effect”. At which point Joe jokingly adds: “Plus I couldn’t play everything very well!”. (We’re sure that’s not true Joe!)

Joe and Guy Jones (bass guitar) had been friends for years and Daniel Martell (guitarist) had similarly known and been friendly with Beth for some time. All of the guys moved to Brighton on a creative journey and Beth explains how they knew of each other through other creative projects and this is how they decided that Guy and Daniel, lovingly referred to as Martell, would be perfect for what they wanted to create as a band.

This is evidently the case displayed through the way these guys gel, feed off and compliment each other both musically and as a, what Beth calls “family”. She explains how she always wanted brothers and said: “It just feels like a family, it’s really cheesy, but that’s how I feel.”

I asked the guys what was the inspiration for their new E.P Hail Mary was and this is what they told me:

Beth: “ It was a selection of songs we had been writing and they were songs that meant a lot to us so we just really wanted to get those ones out. We worked with a producer called Space who did the last few Idols records and is in his own amazing band Black Futures so we went into the studio back in 2019 around June time and June and July we just kind of worked on tracks with him.”

Joe: “We basically just always try to write as much as we can and we’ve always got a back catalogue of stuff that we can just pick from and work on and I think that some of them just fall into place to all be working as one body of work and I think that E.P was just that. Those were our favourite songs for a while.”

About the single Listerine on the E.P Beth explains that she was inspired by darker times in her childhood when she felt she was what she calls “a very obese child” and she explains she had to contend with a considerable amount of bullying. She explains that the single came from the hope she felt as a child that everything would be ok in the end, and that she found writing the track therapeutic and that she finds she heals a lot through music.

Daniel tells how the song originally sounded totally different to what it does now and after a melody from Guy and some direction from producer Space the song morphed into what it is now. If you haven’t heard it you need to!

The guys have been invited to perform at the ‘Live is Alive!’ event at the Brighton Dome on the 24th of this month and tell me how excited they are to be taking part in such a great event, and to finally be playing live music again and especially in their hometown albeit a little nerve-racking after such a long time away from live audiences and only being able to do live stream events throughout the pandemic so far.

The event is being staged by The Brighton Dome and promotion company Melting Vinyl and will be a socially distanced event and adhere to strict guidelines including a changeover time of 10 minutes for the acts which will be a challenge in itself!

I asked the guys if they thought this would take away from the atmosphere of a live music event, and they acknowledge that it will certainly be different but they are hopeful despite restrictions that as Beth puts it “ there will be a sense of community” and that attendees will just be happy to able to take part in a live event despite the limitations. One thing is for sure as Daniel puts it “ It will be a lot less sweaty!”

Finally I had to ask the guys about the recent comments from our chancellor Rishi Sunak, alluding to people in The Arts retraining, and that they are in “unviable jobs”.

Beth: “ I’m very scared of our Government, I don’t think they have the public’s best interests at heart, and I just get so angry about it.”

Joe: “ I think they assume that people do this because its an easy thing to do, and really to actually sustain yourself as a musician or work in music takes so much work and commitment and most people are working a second job just to try to make it work!”

I think it’s safe to say that there is no Buzz and Woody relationship about to be formed there!