Gig Review and Interview: The Pretty Visitors at t... 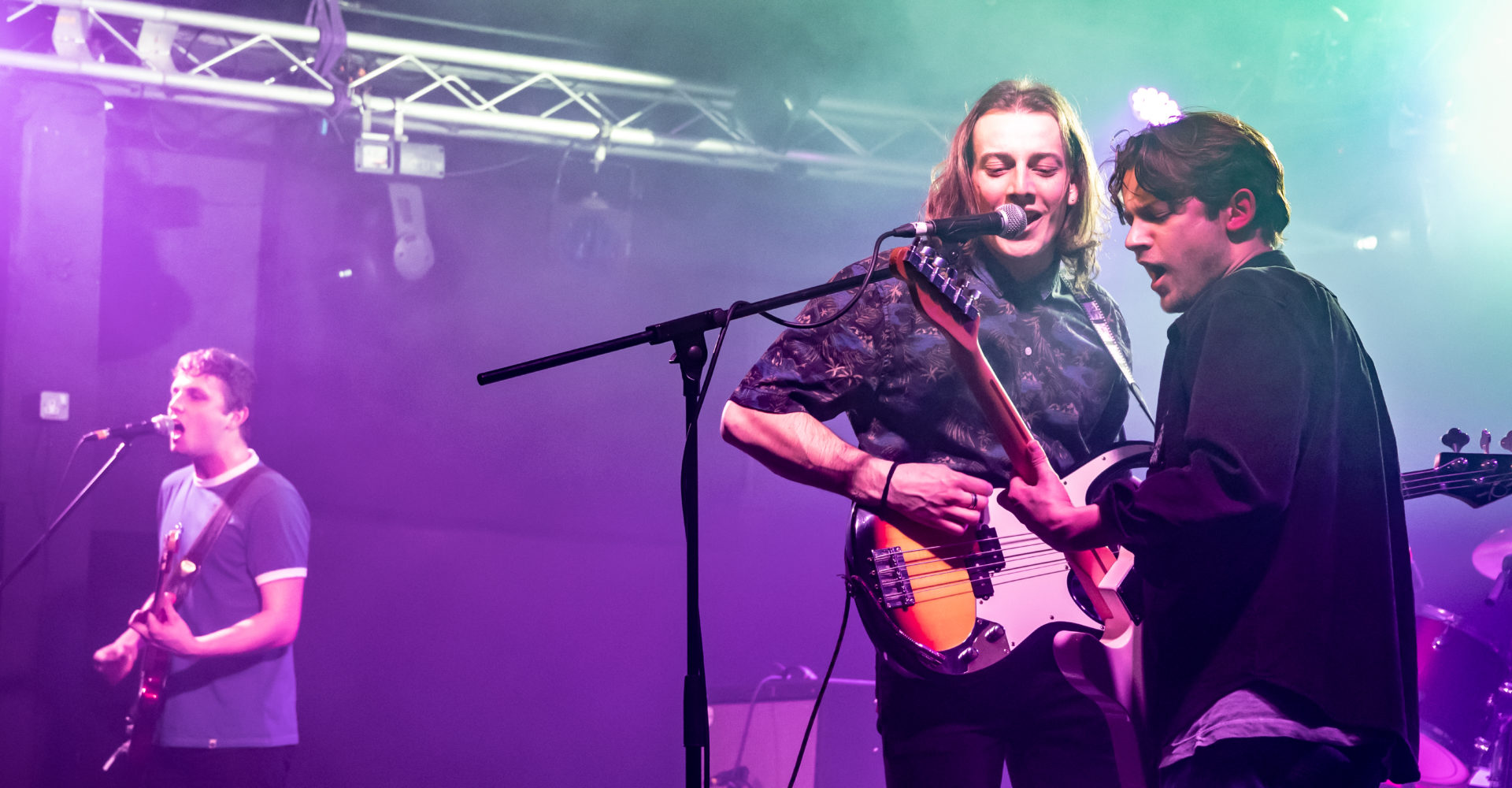 Gig Review and Interview: The Pretty Visitors at the Wedgewood Rooms

Local band, The Pretty Visitors, headline The Wedgewood Rooms on Friday 4th January. They were initially due to play The Edge of the Wedge but as the band sold the ticket allocation it was upgraded to the main room bringing the gig forward by a day.

I arrived at the gig a little later than anticipated (which is always the case!) and managed to have a quick chat with Sam (The Pretty Visitors) beforehand. The crowd already had a lively feel to it and that was even before the boys had taken to the stage. The Pretty Visitors had curated the gig tonight and had chosen Calum Lintott, The New Shoes, and The Edit to be their support. I managed to catch the set from The Edit who were the epitome of lad rock. The swagger, the lyrics, the riffs and the covers all screamed a Britpop and it was clear to see what band have influenced their sound. I’m keen to catch Calum Lintott’s next gig as I’ve since read some good things about his music and learnt that he recently sold out his local gig at The Joiners.

Sam from the band had contacted me via Twitter to come and review the gig tonight and up until that point I was unfamiliar with the band’s music. I hit Spotify and was sucked in by their EP “Sittin’ Pretty” ‘Comedown Machine’ and ‘Seaside’ instantly jumped out and I was looking forward to hearing these played in a live environment. The boys hot the stage just shortly after 10 pm and ripped through at least 12-15 tracks with a mixture of their own material and some covers thrown in there for good measure. These included a short version of ‘Clint Eastwood’ – Gorillaz, ‘Fake Tales of San Francisco’, ‘I Wanna Be Your Dog and finishing with The Subways – Rock & Roll Queen. The band had only just got back together after they split for four years due to University commitments but showed no sign that this had affected them in any way as the sound was tight. The crowd interaction was superb all night, with people pogoing, jumping and dancing giving the band the seal of approval they deserved!

After the show I managed to catch up with the band to provide an insight into who they are and what we can expect from them this year:

How did you guys initially get together?
Aaron (guitar), Connor (guitar/vocalist) and Jack (drum) met at college before Jack met Sam (bass) on a football tour in Amsterdam and introduced him to the rest of the guys. From this point onwards, the band was formed.

Can you give us a little insight in to how you chose the name for the band?
We liked The Arctic Monkeys song title, “The Pretty Visitors” and thought it would fit.

Could you tell me about how you initially got involved with music and who influenced you the most?
Connor: Oasis were an inspiration from a young age but I didn’t pick up a guitar until I was 16, just before going to college.
Aaron: I bought Led Zeppelin, Mothership at the age of 14 and it blew my mind. I wanted to get into guitar after listening, but I didn’t actually start until I met Connor during college.

Oasis were an inspiration from a young age but I didn’t pick up a guitar until I was 16, just before going to college.

Sam: I hadn’t ever thought about playing an instrument until a mate of mine at school said he wanted to learn bass. So I thought, why not, I’m going to try and do it better.

Jack: I started drumming at 12 years old and my teacher at the time massively influenced me and got me into rock and roll.

For those who are new to your music which three tracks would you encourage them to check out first and why?
We want people to check them all out; everything on Spotify! ‘I’m Bored’ had recent BBC airplay, but ‘Comedown Machine’ is a fan favourite. ‘Run’ is a more laidback tune that shows a different dimension to the band.

What bands and artists are you currently listening to and how are they inspiring you to explore and implement new ideas with your music?
Sam: I listen to a lot of current indie rock; Catfish & The Bottlemen, The Amazons, Jaws etc. but also a lot of artists that are completely different; Tender, Jadu Heart. My music range is pretty broad but it helps me put different ideas into my own music.

Aaron: I listen to Jimi Hendrix, Led  Zeppelin, Pink Floyd, The Doors but also love Dr Dre and the American rap scene. I learn a lot of guitar styles from the older music and arrangements from the current tracks.

Connor: Kendrick Lamar; I’ve become more concise with my lyrics and stuck to a common theme since listening to his music.

Jack: I listen to modern bands such as Kasabian, but my drumming influences come from older styles of music; Jimi Hendrix and Keith Moon for example, with creative improvisation.

Collectively, all of our interests merge into the music we write together.

You’re releasing your first single at the end of the month. How’s everyone feeling about this? How much work has been involved to get to this point?
We’re buzzing! It’s been a long time coming as we’ve been working on 4 tracks over the past three months but we’re now at the stage to release our new music.  We can’t wait to get it out there and for people to hear it.

You’ve received some recent airplay via BBC Introducing which is a great platform for new bands. With this in mind, what can we expect from you over the next twelve months?
So, firstly we’ll be releasing our new single, ‘It’s Not Easy’. We’ll also be filming our first ever music video for the track later this month, so we’re excited for that.
Over the next couple of months, we’ll release our second single,’Otherside’, followed soon after by the last two, ‘High Sailing Blues’ and ‘Mystery Woman’. We’ll work on more music videos and get creative behind the scenes too.

The Pretty Visitors release their debut single ‘It’s Not Easy’ on 25th January which will be available on the all the usual platforms and social media – links below. Be sure to check to check it out!

The Pretty Visitors, The Wedgewood Rooms