‘I Am Only Human After All’ Community ... 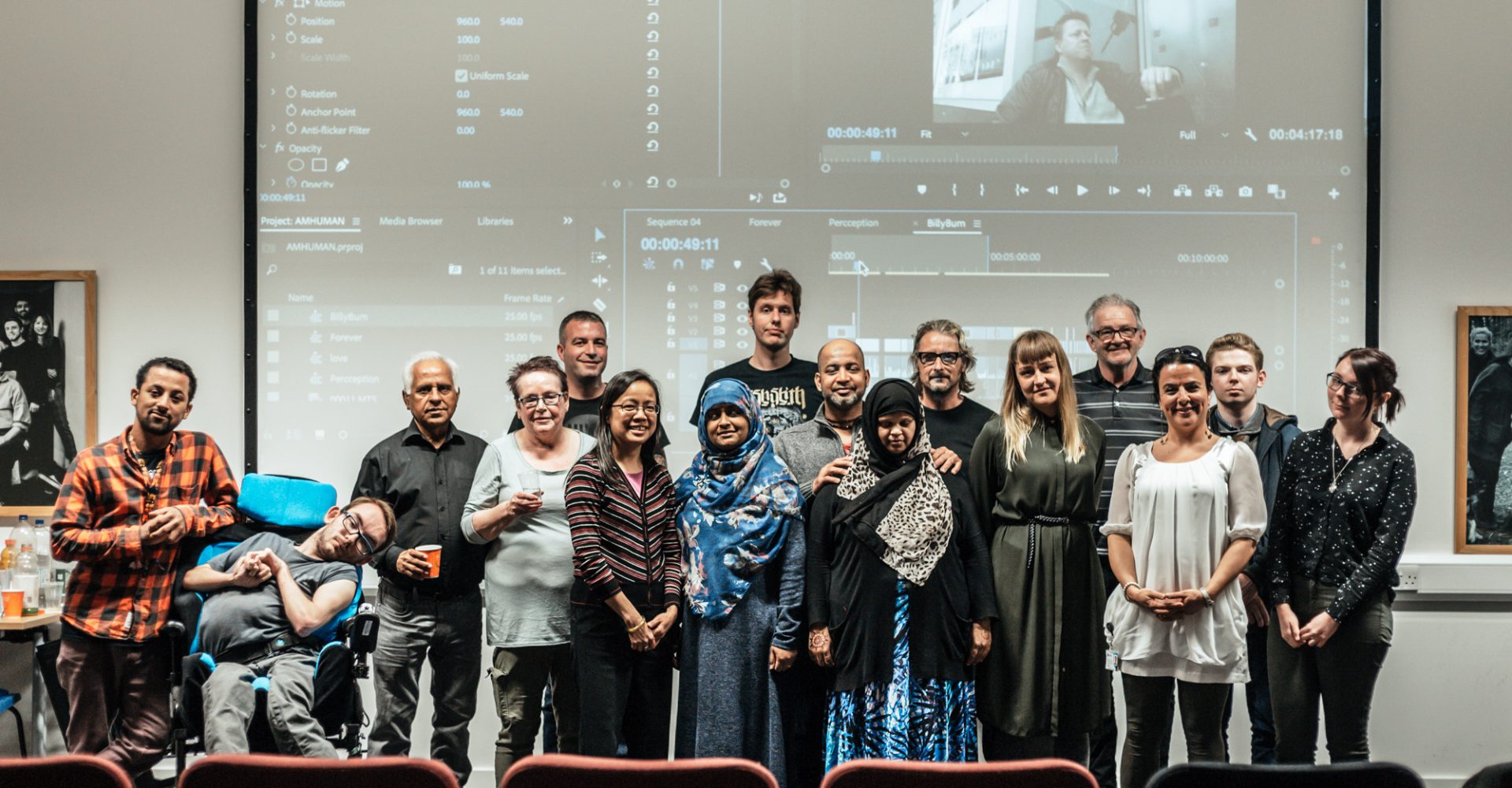 A CREATIVE PROJECT FOR NEW FILMMAKERS FROM PORTSMOUTH’S DIFFERENT COMMUNITIES

Over the last six months or so Portsmouth Film Society have been running ‘I Am Only Human After All’, a community film project for first time filmmakers. The course gave a dozen vulnerable locals the opportunity to tell their story and reflect on their experiences in Portsmouth. Five short films are the result of the 20-week course held at the University of Portsmouth where participants were introduced to all aspects of film-making including script writing, casting, directing, filming and editing. They then became the producers, directors, screenwriters and actors in their own films.

The program also included lectures by local film makers and an inspirational tour of the Pinewood Studios, London. The films will all be screened at a special premiere event on the 30th May at The New Theatre Royal.

We caught up with Ayşegül Epengin, PFS’ Coordinator and leader of the course, to find out all about ‘I Am Only Human After All’:

Working as a team on location in Commercial Road.

How did the film project initially take shape? What was its inspiration?

I met a new friend at one of my old student’s birthday party, this person asked about making a promotional film for his group. Afterwards I spoke to a few local community organisations (PRENO and Empowering 2 Change) who also had a similar idea to create short films with members from their society. Portsmouth Film Society continues to deliver on its mission to help break down social barriers and unite diverse cultures and our volunteers would also wish to get involved with such a project too.

So Action Portsmouth (organisation to help and support local social enterprises) helped us to prepare this project for grant submission and with a superb synergy we made our submission to Awards For All from the National Lottery, and we got it.

Who were you looking to engage with as participants in the project and why?

We reached people inside our community who have never had the opportunity to tell their own story and challenges. We looked for anyone who might have experienced issues such as homelessness, substance misuse, people in recovery, disabilities and multiculturalism.

The course gave a dozen vulnerable locals the opportunity to tell their story and reflect on their lives and experiences. They were recommended to the course by organisations that support the work of PFS such as Portsmouth Recovery Café, Empowering2change and Portsmouth Race Equality Network Organisation. We didn’t want to expose any individuals’ problems of course, the films are dramatisations and the participants created the scripts.

The course was very popular and now a lot of people asking for when the second round will be.

Filming on location outside Aspex Gallery.

Project participants also starred in front of the cameras.

What were the different activities the participants got involved with during the project?

The project consisted of regular filmmaking workshop with 20 weeks covering the different activities involved in making a film. The curriculum included lectures by local filmmakers which focused on aspects such as composition and the importance of sound.

Also we took our students up to London on an inspirational tour of Sony’s Digital Motion Picture Centre in Pinewood Studios. Now they can’t wait for their black tie Premiere at the New Theatre Royal on the 30th May.

What elements of the filmmaking process do you think they enjoyed most? Did everyone get involved both in front and behind the lens?

I think everybody enjoyed the many different roles: from being director to cameraman, or being art director to actor. It was challenging to create 5 short films at once but I think they did very well!

…everybody enjoyed the many different roles: from being director to cameraman, or being art director to actor…

Feeding back ideas after viewing a first cut.

Ayşegül talking through the timeline during an editing workshop.

The first chance to watch back rough cuts of each of their films.

Every step of the filmmaking process in the project is collaborative.

Participants enjoying seeing their work on a big screen.

It is all improvised and the person who sells flowers in front of Boots, he joined the scene naturally…

What different locations did the filmmakers use around Portsmouth? Any interesting stories from when everyone was out filming?

Our students worked hard and they selected the film locations. Wherever we went everybody welcomed our film crew. Our locations were North End Baptist Church, their Big Issue Office and Empowering 2 Change Hub, also Kassia Restaurant at Palmerston Road, Barley Mow on Castle Road, Victoria Park, the city centre, South Pier Parade, the Seafront and one residence at Gun Wharf and one student residence at Southsea Terrace.

We were very lucky with the locations. Also the weather was kind to us too!

A story from the film called Billy Bum, one of our students wrote his story which is about the fight of being addicted to alcohol. One scene we set in the city centre where the actor is pretending to be drunk and asking for money to buy drink. It is all improvised and the person who sells flowers in front of Boots, he joined the scene naturally. We laughed a lot because it was looking so real. We had a great time.

A still from Punching Bag.

A still from Perception.

They are more confident, more feeling free to reflect themselves, more eager to learn and develop skills…

Can you give us a brief description of the different films the students have created?

Billy Bum – A person struggling with alcohol and isolation.
Punching Bag – A person who is injured in a bar fight and his story.
Perception – 3 different characters come together and see how prejudgice is wrong.
Love at First Sight – In a Bengali dinner Rohima and Muhammed meet up for the first time.
Forever – A women lost her mind because of unanswered questions.

We have also behind the scenes and bloopers films from the productions days.

How do you feel the participants benefited from their filmmaking experience?

I am happy with the results and the transformation they’ve been through. They are more confident, more feeling free to reflect themselves, more eager to learn and develop skills.

Do you feel the participants will continue their filmmaking and do you see this project continuing again in the future?

I believe most of them will continue to be involved in filmmaking. Some of them have already started second projects and asking for my advise. Due to the success of this project, we are planning three more and to set-up a local film school; we strive to be an educational bridge in our community. Our student’s films are well-shaped, and we are expecting some tears from the audience on the screening night!

A still from Love at First Sight.

A still from Billy Bum.

The red-carpet premiere for ‘I Am Only Human After All’ will be held at the New Theatre Royal on 30th of May and is open to the public (view the Facebook event HERE). Tickets cost just £7 and are free for under 16s. A vote will be held on the evening to decide the audience’s favourite film and a raffle will also be run, with prizes to be won. Donations will go towards Portsmouth Film Society’s future development of their filmmaking course. The short films will also be entered into various competitions and will be screened at other local events in 2018.

To find out more about the Portsmouth Film Society, and the participant’s stories behind the films, visit their website at www.portsmouthfilmsociety.org.uk or follow them on Facebook.