Each year the University of Portsmouth BA (Hons) Graphic Design Level 5 students are required to undertake a live client project as part of the Professional Practice: Live Design Briefs Unit coordinated by Senior Lecturer Dan McCabe at the University of Portsmouth. This year, Dan approached the Royal Society for the Protection of Birds (RSPB) and, with their input, set up a challenging poster competition, in collaboration with Strong Island.

The students were tasked with designing an A2 portrait poster that would improve the way in which visitors perceive, understand and engage with two of their local reserves situated within Langstone Harbour, an internationally important coastal site brimming with rich and internationally protected habitats and species. The site covers some ten square miles of tidal channels, saltmarsh, mud flats, shingle islands and sea grass meadows. During the summer months, the harbour hosts one of the largest seabird colonies on the south coast. Hundreds of terns and gulls migrate from near and far to breed here and feed their young in the fish rich waters. Later in the year, Brent Geese arrive from Siberia along with large numbers of shorebirds from other parts of the arctic to overwinter here, feeding on the nutritious mudflats & sea grass meadows.

The RSPB are a large non Governmental organisation that focuses on conservation within the UK and its international territories. Although originally concentrating on birds, they now focus on all nature via a varied team of over 2,000 staff and almost 13,000 volunteers working in conservation, research and caring for 200+ nature reserves. As of 2016, their UK membership is over 1.1 million people, all supporting them in their work to give nature a home.

56 posters were produced in response to the RSPB Poster Challenge, and 15 of these student posters received special commendations as judged by tutors, the RSPB, and Strong Island. The commended posters were felt to be the strongest in regards to their potential to grab the attention of visitors and communicate with them through the delivery of positive, meaningful messages, and a highly considered use of text and/or image. The 15 commended students are Oliver Bartlett, Sophie Davitt, Claire Dunford, Xiaojuan Du, Lise Fjulsrud Easton, Ben Edwards, Alex Harvey, Nedina Hristova, Joshua Lockey, Nicola Lockwood, Shelby Micallef, Megan Milum, Alistair Rigby, Carl Frederik Wigernes and Rebecca Wright.

This week sees the opening of an exhibition of the final posters within the Eldon Building in the main first floor corridor of Eldon West from Thursday 16th March. Senior Lecturer Dan McCabe’s own poster, produced and sold in collaboration with Strong Island to raise funds for local RSPB conservation efforts, will also be on display. This poster is still available from the Strong Island Clothing Co store at 12 Highland Road in Southsea.

The launch of the exhibition is at 5.30 – 7pm on March 15th. Strictly invite only, if you would like to attend RSVP to denise.callender@port.ac.uk. 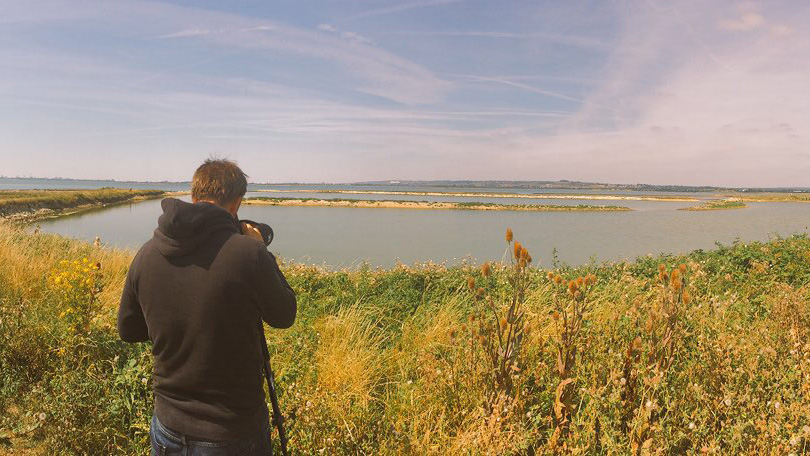 Wez Smith, Sites Manager for Langstone and Chichester RSPB reserves and one of the judges of the poster competition, photographing little tern chicks out on the RSPB Langstone site. Credit: Dan McCabe.