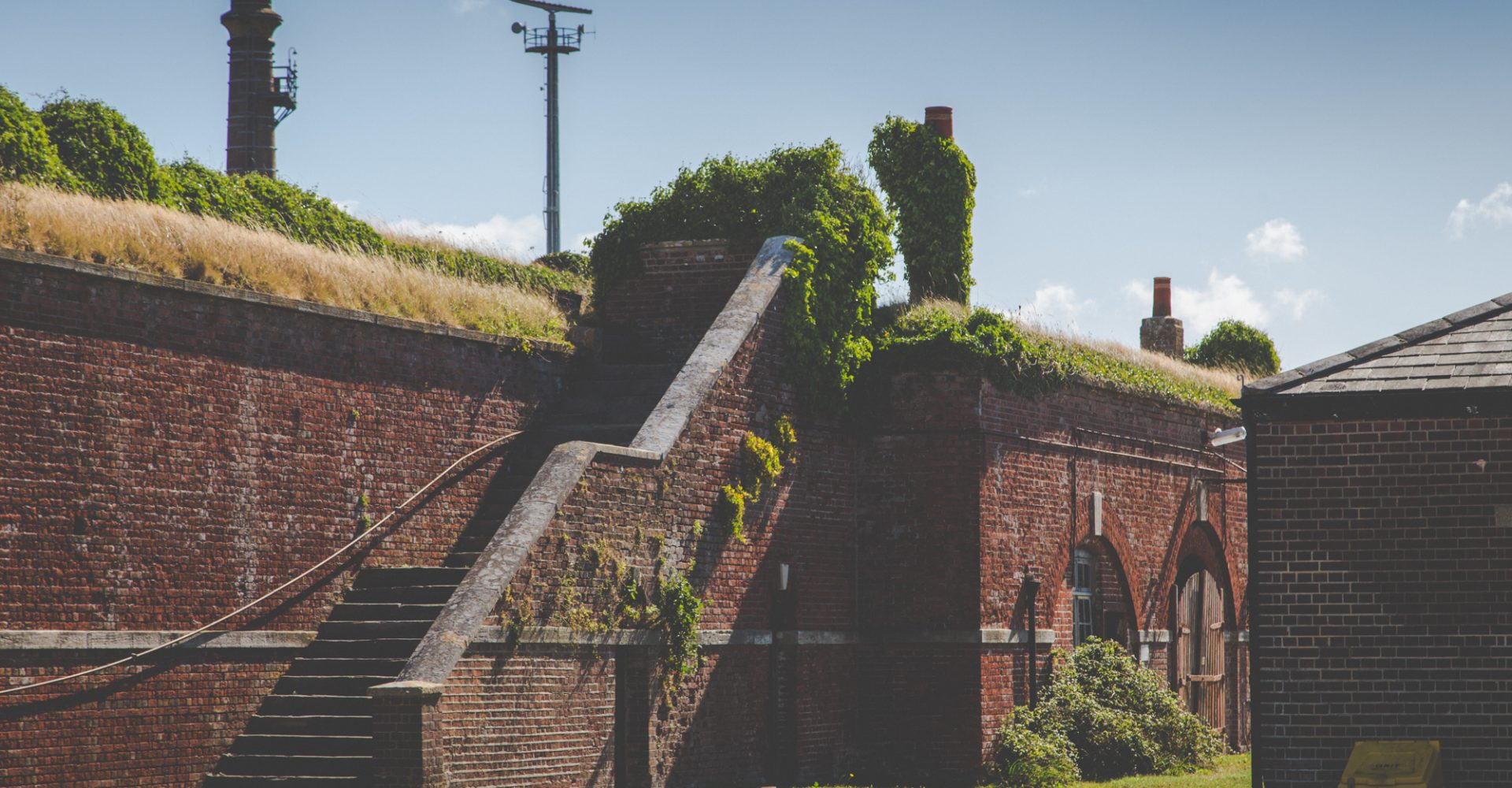 “PERHAPS THE MOST IMPRESSIVE PIECE OF EIGHTEENTH-CENTURY DEFENSIVE ARCHITECTURE IN ENGLAND”
– NIKOLAUS PEVSNER, BUILDINGS OF ENGLAND

Portsmouth’s military history is still evident in many different locations in and around the city, from the forts on Portsdown Hill looking out over the Solent to the overgrown and repurposed forts and fortifications along Southsea seafront. Almost all of the city’s defences that are still standing are accessible, some all the time such as the Hilsea Lines bastions, Lumps Fort that is now Southsea Rose Gardens and forts on the hill such as Fort Purbrook and Fort Nelson. Unlike all of these, one of the largest forts in the city hides in plain sight, behind large gates and high barbwire fences: Fort Cumberland.

…one of the largest forts in the city hides in plain sight, behind large gates and high barbwire fences…

Contemporary entrance to Fort Cumberland, created from the bomb damage from the Blitz.

Footprints of the two Cumberland Forts.

Heritage Open Days visitors looking at the different phases of the Storehouse/Hospital.

Located down a short, unassuming turn-off from Ferry Road on your way out through Eastney to Langstone Harbour, Fort Cumberland sits out of sight and only accessible on the annual Heritage Open Day week in September. For years I have been wanting to explore this fort and always something crops up so I cannot make it…until this year. Last week, as part of 2016’s Heritage Open Days event the fort was opened by Historic England, who run and maintain the fort, but which is actually occupied by an archaeological research establishment and is also home to the Nautical Archaeology Society and the south west office of the CITiZAN project.

On Arrival through the gates you dip down and take a winding road around the huge and imposing external stone walls of the fort past one of the original, small entrances. The fort is so well hidden because much of it sits at or below ground level, making it difficult to spot by enemy ships and the fortifications and dry moat making it a nightmare for attacking troops. The road curves around the walls to the westerly contemporary entrance, created initially by a WW2 munition that on the 26th of August 1940 was one of 70 bombs that hit the then home of the Royal Marines Technical Training Wing. The bomb that hit the Land Curtain destroyed a bomb shelter and sadly killed eight men sheltering inside. A memorial plaque now stands at the entrance gate as you pass out.

As you come up through this contemporary entrance you are first caught by the sheer scale of the fort, there is no doubt it must be one of the largest in the local area and feels strikingly different to Fort Nelson, Fort Widley, etc. Once at reception the party of visitors were meet by our guide who straight away brought us up to speed with the fort’s fascinating early history. The reception building itself is also a sort of microcosm of the fort’s stages of history, with the original storehouse from 1747 ,that now forms the archaeological library, through to the hospital additions in the 1860s and even the more contemporary changes from the 1990s.

Looking across the old parade ground from the Hospital to the Old Garages that are now archaeological laboratories.

View of the centre of Fort Cumberland.

…over 5 million bricks were used in the construction of the fort, so many that a dedicated brickworks was created in Eastney…

Original entrance/Sally Port through the main curtain wall, both sides are casemates that were home to guns and soldiers.

Casemate entrance, the other side was a gun embrasure facing out to the Eastney entrance.

The casemates would have been home to large guns and troops, sharing the small spaces and sleeping on hammocks to save room…

Our tour exploring the fort began at the Storehouse/Hospital and then we made our way to the Right Curtain wall. The main wall around the fort is thick stone on the outside and brick vaulted ceiling casemates on the inside, with the original access archway Sally Port entrances in the middle. The casemates would have been home to large guns and troops, sharing the small spaces and sleeping on hammocks to save room. The second Fort Cumberland was designed for 650 troops but the numbers varied, with records in 1861 showing the fort home to 761 men.

These small brick vaulted rooms would be home to a varying number of troops, with 14 in a casemate with a cannon and fireplace, 16 with a cannon, 26 with a fireplace and 30 squeezed in without either a fireplace or cannon. These casemates on the Right and Land Curtain walls are in various states of repair and currently unused apart from storage. Some still have the original cast iron door frames, these could be removed quickly from the walls to increase access space to allow for cannons to be moved during attack.

These tiny, twisted orchids grow all over the fort site, which is a designated Site of Special Scientific Interest.

Reinforced doors protect access to the Bastion that contained gunpowder for the cannons.

Looking out of the Bastion doors.

This vaulted ceiling Bastion room would house munition supplies and be lit by lantern windows.

Many of the unused Bastions and Casemates are home to nesting birds that find ways in and out.

We headed up the cannon ramp up to the area above the Bastion, with a view out over to Hayling Island. The gun emplacements here are original but there are various signs of WW2 redevelopment for gun upgrades, etc. The fort was originally equipped with 34 guns, mainly 18 and 32 pounder smooth-bore muzzle loaded guns. The second fort had a varying array of 104 guns.

The views to the south show the dry moat, made for holding up attacking forces. From here you can see the local landmark sewage works brick chimney and the radar mast. We moved along the North Curtain to the site of a ‘disappearing’ gun, an 1890s 6″ breech loaded gun that was hydraulically lifted up over the wall and when fired would descend by the gun’s recoil. These guns meant that the gun emplacements were difficult to target by the enemy. From here shells were pulled up from the rooms deep in the Bastion below.

We headed up the cannon ramp up to the area above the Bastion, with a view out over to Hayling Island

Gun ramp leading up the Bastion.

The once hard surfaced parade ground and ramps are now overgrown with plants and grass.

View out to the moat and The Solent beyond. The guns here could have a range of 4000 yards from the barrel’s rifling grooves.

Cannon ammunition would come up from the Bastion rooms below through these ‘fireplace like’ openings.

Gun emplacement for a ‘disappearing’ gun, with the ammunition opening on the left. The right would have been a feedback panel from the spotter’s position so gunners would never have to be above the wall line.

The original coat hook panel and wooden access walls are still here, as is the bench in which they sat when changing their shoes

These more advanced guns from the late 90th century had more developed Bastions underneath supplying shells. The rooms were split so gunpowder and ammunition were kept separate, with a room in-between for the soldiers to change in to cotton clothing and soft shoes to minimise the chance of creating sparks. The original coat hook panel and wooden access walls are still here, as is the bench in which they sat when changing their shoes. These dark corners in the fort are unlit and the lanterns we had matched the same sort of lighting these rooms had, with lanterns hidden behind glass and brass windows, also to prevent any accidental sparks or explosions.

Archway leads to the Bastion rooms.

The original bench soldiers would have got changed on.

The later electrical lighting is rusted or was removed, possibly for scrap when the Marines left.

Looking up where the shells would have travelled up to the guns.

We went down past the Officers Quarters and past the more contemporary archaeology buildings and over to the fort’s detention cell, also called ‘The Black Hole’. This small room located near the main gate is damp and would have been freezing cold in winter. Covering the walls is graffiti from the cell’s residents, ranging from the days marked off to sketches of ships to intricate type, saying things such as “Lord keep away transgression and pardon mine iniquity”.

We left The Black Hole and passed out through the main gate and past the Ravelin and through a tunnel to the High Angle Fire Battery, a late addition to the fort in the 1890s. This area was home to two experimental cannons that were designed to fire shells that would have high arcs, falling out of the sky on to the (more venerable) decks of attacking ships.

Covering the walls is graffiti from the cell’s residents, ranging from the days marked off to sketches of ships to intricate type…

Counting down the days…

Past the Ravelin, next to the moat is a south facing area which was originally home to two experimental guns.

A high angle fire gun would have sent shells in a high arc out in to The Solent.

The High Angle Fire Battery was in later years adapted for more modern weapons, with a multitude of small support buildings added in a mixed state of repair. The derelict collection of structures gives the feeling of a once busy part of the fort now almost completely forgotten and slowly decaying away. Might make a great location for a zombie film, mind.

Looking through the windows and the doors you could find all sort of interesting old signs of the soldiers using the space. Also the tall overgrown grass covering the battery hid signs of the past human occupation and of the more recent animal residents, with a little hunting around you can find old bits and pieces, including animal bones.

Rusted to the point of fading away, this old table and chair have been sat here overlooking this Battery for a while.

We made our way back through the tunnel and back in the gates to The Guardhouse, a large brick building with a very varied history. Originally built between 1747 and 1750, this first fort building controlled access with open archways on the ground floor and gunners barracks on the first floor. With the new fort built and the entranced changed the building had new walls and used as offices and then in the 20th century a rope store. Later in the 20th century the upper floor became a theatre and cinema, with a projection room and a stage with lights. The space was also used as a chapel.

Our tour took just over two hours and was an incredible insight in to one of Portsmouth’s most interesting locations to explore and I would 100% recommend anyone interested in local heritage and in particular photographers to catch the open days next year. A big thank you to our guide on the day and English Heritage.

…in the 20th century the upper floor became a theatre and cinema, with a projection room and a stage with lights…

The Guardhouse, one of the two remaining first fort buildings.

Once a rope store and then the cinema, theatre & chapel. 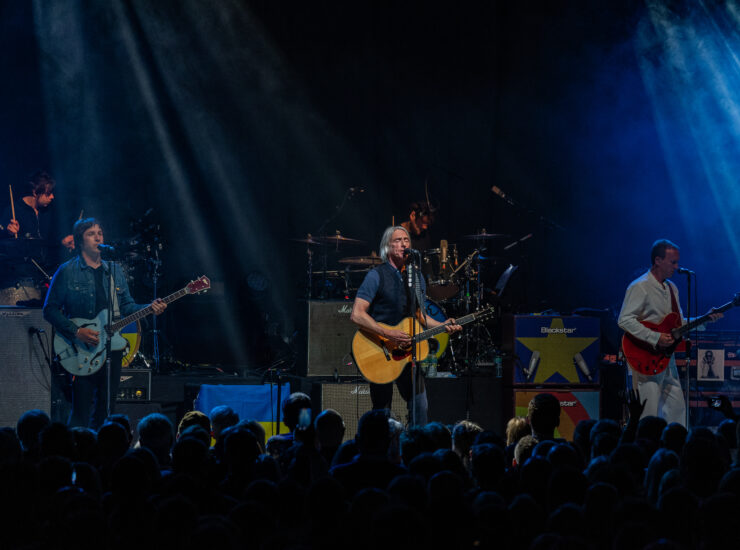 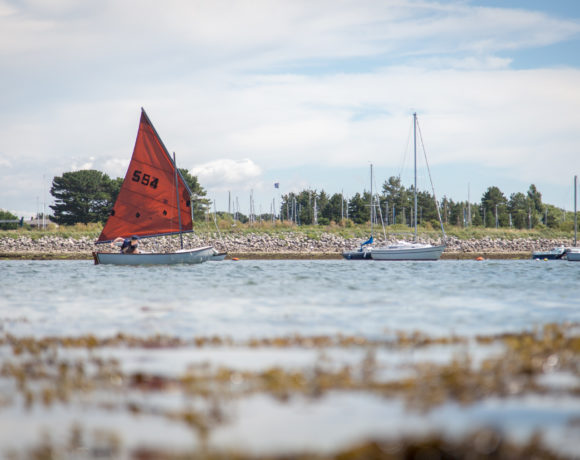 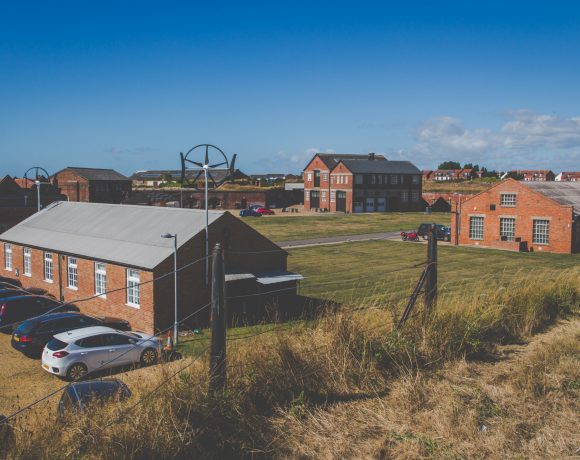