In the six years we have been writing articles we have featured the progression of aerial photography in and around Portsmouth and Southsea, with photos from kites, planes and helicopters. Recently small, affordable remote helicopter drones have enabled people to film and photograph the city, allowing amateurs and professionals to share views of landmarks and locations like never before. We spoke to James Harvey of Hampshire Aerial Photos who works professionally with drones to find out more:

How did you get started in aerial photography?
Photography in general has always been a passion of mine but the aerial part was inspired by my father who was a Flight Engineer on Jumbo Jet’s. He’s now retired but flew over 6000 hours in the cockpit of a 747 and captured some breath-taking photos. Following in his footsteps, about 5 years ago I got my Private Pilot’s Licence, not quite a 747 but I would use every spare penny to jump in a light aircraft armed with my Nikon SLR and shoot some really stunning photos. I’d post them on social media and get hundreds of likes. It was then that I realised there was a demand for this kind of photoghraphy but I never really had the time or the money to pursue it. I continued aerial photography in this way as a hobby until last year when I attended a conference on aviation safety and one of the hot topics was about ‘drones’. During the conference I had a light bulb moment and as soon as I got home began researching different drones, licences and the process to becoming a professional drone operator. About a week later I took the plunge and bought myself a drone, strapped a camera to it and it all took off from there really (pun intended). 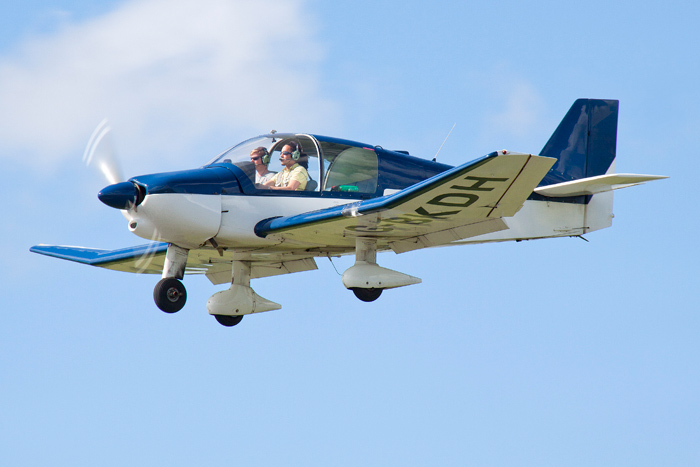 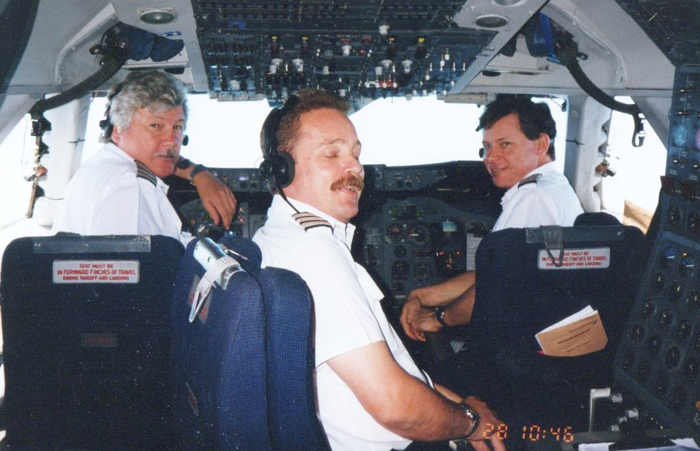 James’ Dad (Paul Harvey) in April 1994 at work in the cockpit of a 747-136 before take off for the return leg to Heathrow from Jeddah, Saudi Arabia (Flight Engineer in the middle).

Can you detail what is involved in flying a drone? Also what sort of height, range, etc?
To fly a drone you require much of the same skills as you do to fly a manned aircraft, good hand eye coordination, good reactions and good eyesight! The one new skill that flying a drone requires is the ability to maintain orientation for a remote distant object. For example a drone flying away from you has the same left or right as you do, but when the drone is flying towards you everything is reversed and this can easily catch you out if you’re not concentrating. Luckily drones are highly sophisticated bits of kit with lots of sensors and gizmos that make things a lot easier, we use the remote control to adjust height, speed and direction just like a manned aircraft. But unlike a manned aircraft, if you get in any trouble you simply let go of the controls and the drone will hold its height and position using GPS satellites. Another nifty feature if you have any difficulty flying or perhaps you lose visual sight of it, all you have to do is hit the red switch on the remote control and the aircraft will autonomously fly back to you and land safely where it took off from. 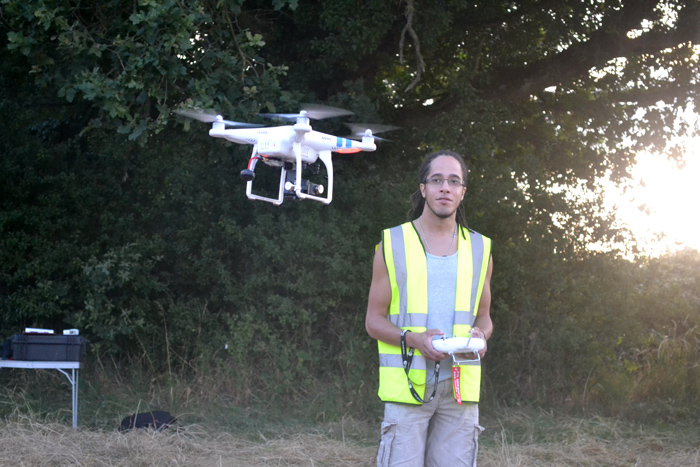 The use of drones is not yet fully integrated into the rest of the aviation world so current regulations prevent us from flying more than 400ft high (manned aircraft are not allowed to fly below 500ft so this ensures a safe buffer between the two). We must also remain within 0.5km from the pilot or within visual line of sight (whichever is closer).

What sort of camera equipment, lens, etc do you use?
My current camera of choice is the GoPro Hero 3+ Black Edition. This surprises many people, especially professional ‘ground’ photographers but when you compare it to a Digital SLR (for purpose of aerial photography) the GoPro comes out on top, everytime! The video quality is amazing, it shoots anything from 1080p HD all the way up to 4K (cinema quality), it can shoot video and take photos simultaneously and most importantly it’s small and light. Connected to the camera I have a 5.8GHz Video Transmitter which streams live footage from the aircraft down to me on the ground through an HD screen, this allows me to frame up shots and allows the customer to preview the footage.

My aircraft of choice is a DJI Phantom 2, this is the go to drone for many operators as it works straight out the box and only takes a few modifications and some soldering to get it photography ready. 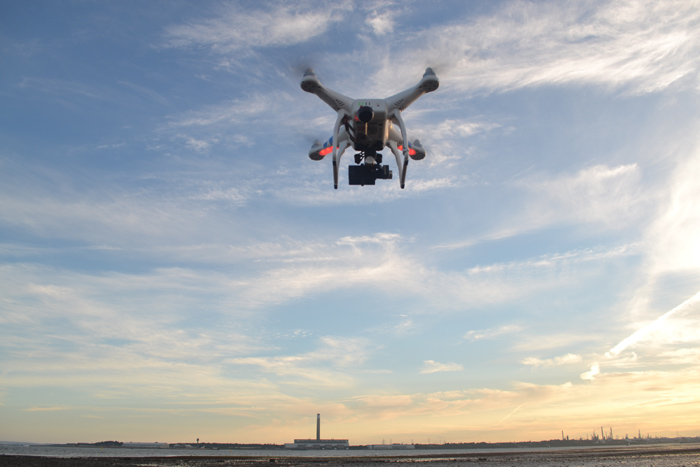 James’ DJI Phantom 2 enjoying the sunset on the River Hamble.

Working commercially, what projects have you been involved with?
Using drones for aerial photography is a fairly new concept to the general public, we’ve been getting on fine without them for so many years so it’s not easy to convince people this is the future. Sometimes the word ‘drone’ doesn’t help because this often conjures up images of military drones with weapons but this is just something that will take time to get used to. Despite this I’ve been quite busy, mostly from home owners and estate agents. An aerial photo of a large property in all its surrounding is a real eye grabber. One of my first customers was for a lady in Brockenhurst who had an old aerial photo from years ago taken from a helicopter and she wanted an updated one. Back then the aerial photo would have cost hundreds but today we can use a UAV with the same results (if not better) for a fraction of the cost.

Other projects I’ve got coming up include an aerial survey of some flood attenuation in Newbury for a well-known infrastructure and construction company and I will also be providing aerial photos and videos of Wickham Festival.

Do you use the drone for fun too? What locations do you like to shoot?
Oh yes, I take every opportunity to fly! If I’m going somewhere I think might have some aerial potential I’ll always pack my equipment. My favourite locations for aerial work are the English heritage and historical sites dotted around the country. They are such great landmarks to view from the air. 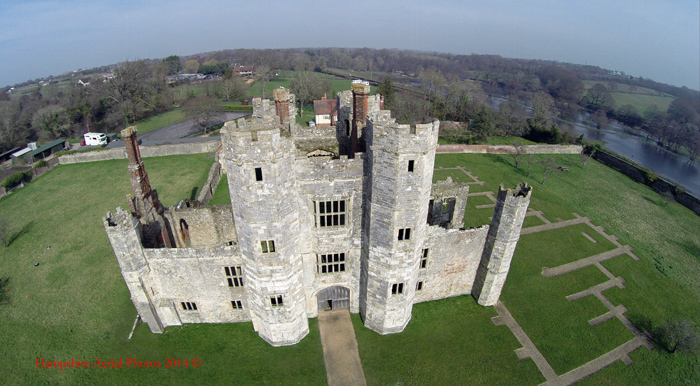 What is your favourite local location?
My all-time favourite location so far has to be Southsea Castle, it was one of the first aerial videos I took and I loved every minute, despite getting up at 4:30am to get the sun rise! I remember I had a massive smile on my face the whole time I was chopping and shaping it into a video. The site is truly wonderful from the air and has so much character. I also run a social group (Portsmouth Happy Hour) and recently 70 of us went to the Southsea Castle for their weekly summer champagne night and it was such a great night, if you haven’t experienced it I thoroughly recommend it. 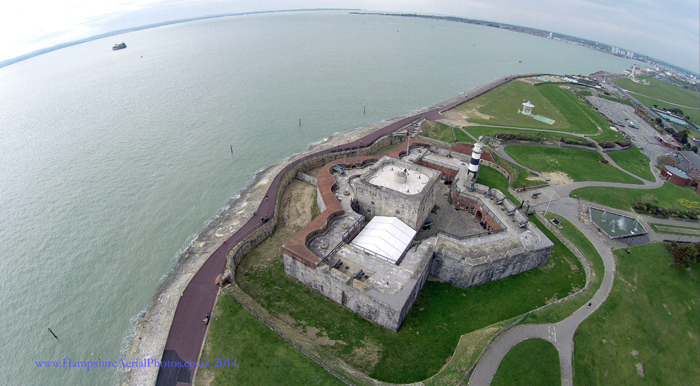 How do you see this type of photography developing in the future?
The future for aerial photography is very bright! Drones are getting cheaper and the technology is advancing at a scary rate, there is already technology on the market that can make your drone completely autonomous and hands off, i.e. you can plan a flight program on your laptop hit enter and the drone will takeoff, fly the route, circle and photograph landmarks and land autonomously. This has great potential for aerial photography but also opens up other uses such as aerial surveillance for security purposes. I have no doubt that aerial photography using drones will increase significantly over the coming years (the House of Lords has even recognised it’s increasing popularity and begun an inquiry into them). I do see them being a common sight in some key areas though; Fire Brigades will use aerial drones armed with thermal imaging cameras to help assist firefighters to efficiently and safely fight fires, Power Companies will use drones to perform regular safety inspection of pylons and electricity cables, News Reporters will use drones to obtain footage of natural disasters or other hazardous scenarios, Police will use them track criminals or find missing persons…the list is endless and it’s a really exciting time to be a Drone pilot.

See the photos from Southsea and Southsea Common (including the set up of the Southsea Show) below and to find out more about Hampshire Aerial Photos and see more of James’ work visit: www.hampshireaerialphotos.co.uk 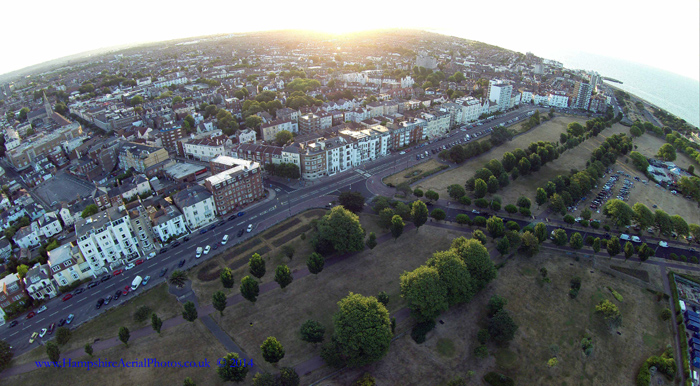 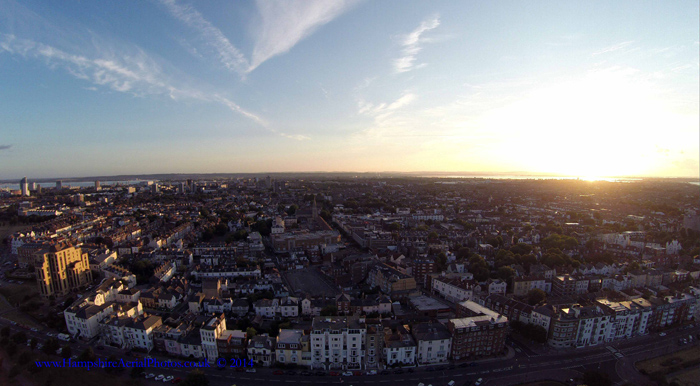 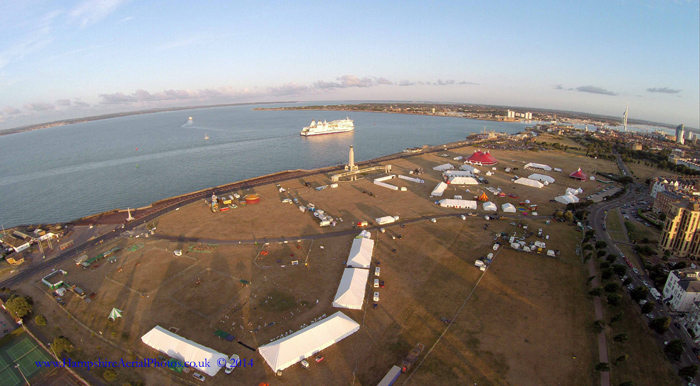 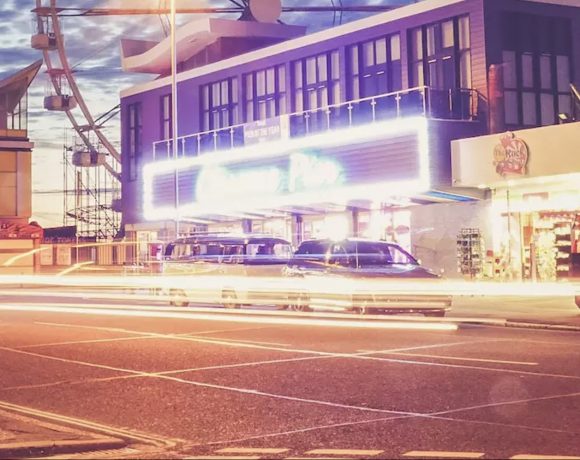