Photography to be Banned on Southsea Beach and Sou...

Photography to be Banned on Southsea Beach and Southsea Common

Word quickly went around local photographers and photography groups that Portsmouth Council have plans to be implemented from today that will dramatically restrict photography on Council land within Portsmouth and in particular Southsea & Eastney beach and Southsea Common. The reasons for this and more details were announced in an email from Portsmouth Council’s media office spokesperson Jeff Widener:

“Two years ago local residents who live around Southsea Common raised complaints about people having BBQs on Southsea Common and on the beach and Portsmouth Council agreed this was a problem and came up with a clever plan of creating BBQ zones. Residents have recently raised a new complaint that people on Southsea Common and the beach are taking photos that may include their properties and sometimes also include them in the background without their permission. The council takes privacy concerns very seriously so as of the start of the month we are introducing ‘Photography Zones’ in small areas such as the Rock Gardens and the Rose Garden. Photography on the beach and the majority of Southsea Common will be restricted”.

This obviously comes as a serious blow to many local photographers but worse still was this follow up comment after the council were contacted for clarification:

“We can confirm that mobile photography, including the use of Instagram, will also be banned. We will be monitoring the #Southsea and #Portsmouth hashtags on Instagram and will be checking for people breaking the bylaw and will consider prosecutions if necessary”.

Thankfully there is a way of fighting back and letting Portsmouth Council know that these new rules are not on and this is by signing a new petition HERE. We at Strong Island have always loved photography and taking photos in Southsea and wish to get as many people to sign the petition so please share the news of this ban as much as possible on Facebook, Twitter, etc. 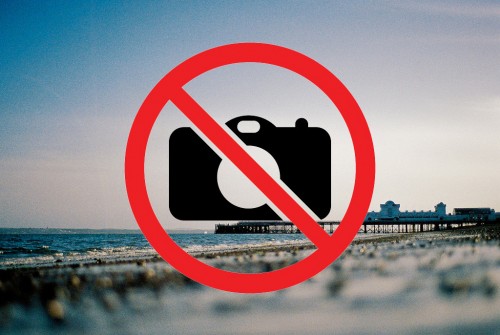