The Portsmouth Summer Fair and..

Phaeleh, pronounced “Fella”, is classically trained musician and electronic sound scientist Matt Preston. Having being swept up in the wake of the Dubstep phenomenon his diverse influences resulted in an equally diverse musical output, ranging from the euphoric heights of Nordic electronica through cinematic breakbeat to the depth charges of Dubstep.

Phaeleh’s unique sound has garnered support from the scene’s leading artists, including Skream, N-Type, Scuba and Kryptic Minds, as well as radio support on BBC Radio 1, BBC 6 Music, Kiss and XFM. His recent remixes for Niki & the Dove and Ruff Diamonds have seen him the “go to” man for a chart grazing bass heavy rework!

Kingsin started off making music at 170 bpm, with Loxy, Data & Pessimist supporting their underground minimal sound. They released there first collab 12″ with Data (Metalheadz) entitled Baggage , this came out on deepsoulmusic in March 2010.

Fast forward to 2011, they are now working around the slightly slower bpm count of 132-140bpm, with southcoast label Sounds of Sumo just releasing their debut 4 track e.p. The E.P is currently getting support from the legend DJ Flight (RinseFM/FWD) ScratchaDVA (RinseFM/Hyperdub) Diplo (Mad decent) Krywolf (Sumo) to name but a few.

Keep up to date with all the Subliminal happenings over at their Facebook HERE. 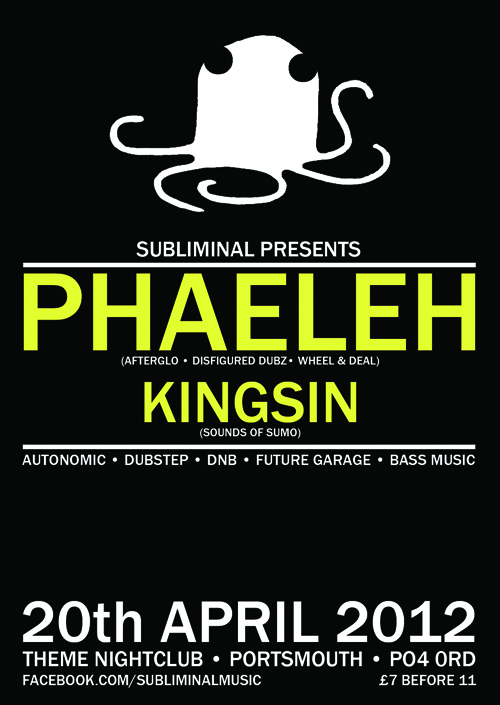