20 years!!!! That has to go in the books as Southsea longest running night? Give or take, most people you bump in to have been to a least one Chaos night, and most spent a grimy late one down the pier dancing like idiots and spilling Newcastle Brown all over the place. I’ve a lot of fond memories of the earlier days at Chaos, mostly after skating and sitting in the pub saying I’m not going. Not this week. Then 8 pints later jumping in a taxi…

If you have any stories or cool photos from Chaos we’d love to see them. Or even some of the old flyers. There have been some pretty interesting designs over the years. I’ll always remember the photo flyer of the kid on the dance floor with a girl and his ‘wandering hands’.

Jay Dunstan got in contact and had this to say:

“To coincide with our 20th Birthday on Saturday 26th November – we’re announcing that this will be the last ever “Chaos”.

Having been a constant in our lives and the Portsmouth clubbing & music scene for 2 decades – Its been a very tough decision to stop the regular club night. But we feel that now is the best time to unplug the speakers for the last time.

Chaos was always quite literally about being ‘alternative’ – alternative in music policy, but also offering an alternative to the traditional and mainstream clubs. Our ethos was always simple – play music we liked, to people to we liked & do it prime time on a Saturday night 52 weeks a year!

Our feeling is that the current scene is very different now and although still loving every element of the gigs, festivals and guitars – a regular club night offering everything we did, now isn’t whats required. Clubbers will always want an alternative, but the music scene is now so split and venues, pubs & clubs are all competing for survival – we felt it was a good opportunity to step back, take a deep breath & raise a glass to rock n roll!

We want to thank everyone who has contributed to the success of Chaos over the last 20 years – venue managers, bar staff & door stewards – sound & light technicians – – street teams – performers & bands and of course the roll call of DJ’s past & present that have provided the soundtrack to so, so, so many silly, drunken and above all fun Saturday nights. 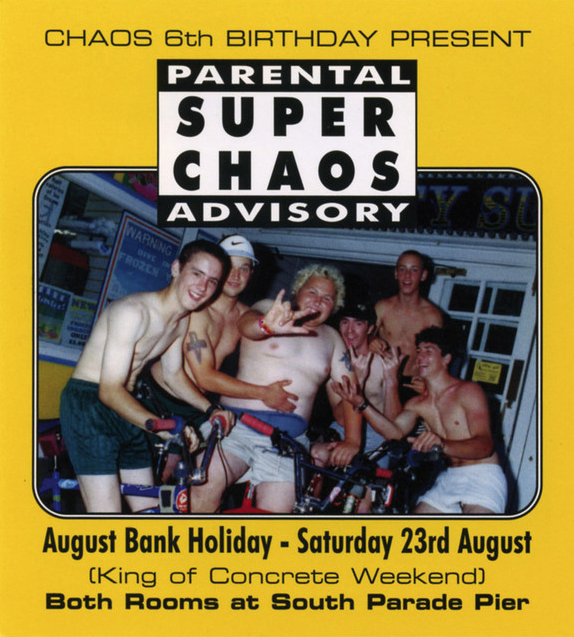