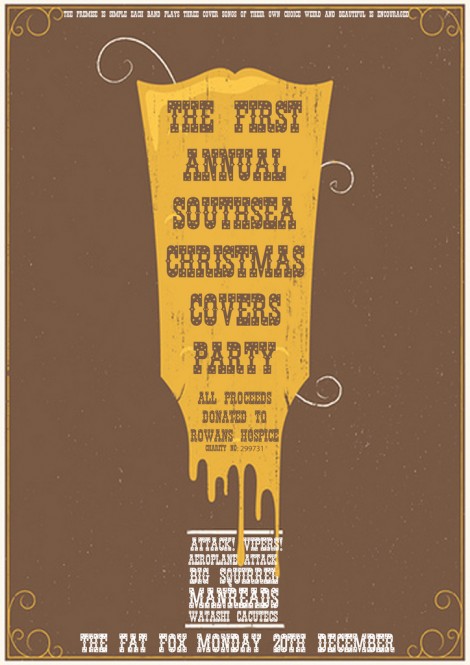 Some of the finest bands in Portsmouth come together to copy a concept from Nottingham – The Annual Christmas Covers Party!

The premise is simple, cram as many bands onto a stage and ask each of them to play three cover songs (not necessarily Christmas songs!). The suggestion is that they should make the original song sound plenty different, change it’s context, or just be damn memorable and funny.

It’s all about bands not taking… themselves too seriously, having a right laugh, and raising as much ca$h as we can for The Rowan’s Hospice.

Entry will be £4. You’ll get more than enough action than you should for that…

Tom Hussey will also be running a carbooty charity bargain basement, expect T-shirts, records and CD’s – all to raise ca$h for our charity Rowans Hospice.

The epic sound that is ATTACK! VIPERS! Portsmouth’s finest hardcore, off the map act, packing all the girth other bands won’t come close to. Back wheels ‘n all. Not in the know? Don’t bother then…
http://www.attackvipers.co.uk

Southsea’s perennial underachievers AEROPLANE ATTACK aim to set the record straight by playing real songs. Not theirs. Some songs might have actual words too! F**K.
www.aeroplaneattack.com

BIG SQUIRREL are the original two piece. Garage rock in the key of experience. These silver surfers don’t need to rehearse, they just know.
http://www.myspace.com/bigsquirrel

WATASHI CALCUTECS are not Japanese calculators, they are a 4 piece with only 3 people – fact. A class of mental calculators known as Calcutecs perform cryptography in a sealed-off portion of their brains, the results of which they are unable to access from their normal waking consciousness.
http://www.myspace.com/watashicalcutecs

THE MARVELLOUS MECHANICAL BAND step into the breach to play their own brand of prog, jazz beefheart infused shenanigans. Bring your winding up keys… mechanical innit.

SMALL COWBOYS are the first act onstage. They’re virgins, but not like that. I’d like them to sound like the cerebral mix of RL Burnside and disco, but it won’t happen. Will it?

Bands will receive complimentary food noms courtesy of @Fox Chef who is returning to the previous high standard of food the fat fox is famed for. Thanks!