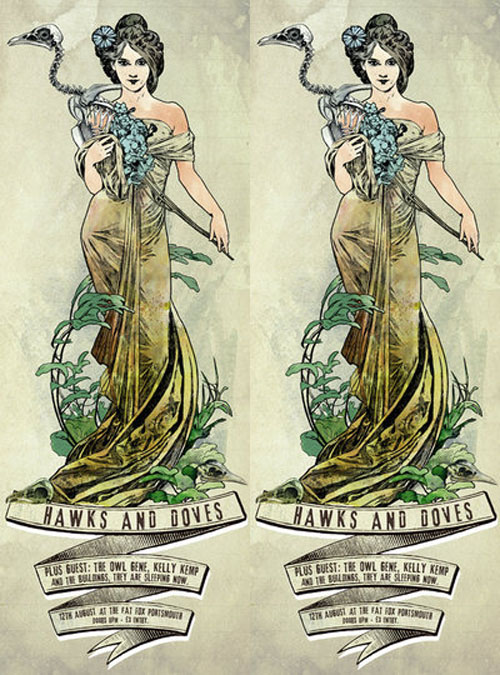 Hawks & Doves is Gared from Planes Mistaken For Stars solo project, this will be just him and an acoustic guitar and only one of a handful of UK dates. Now based in Chicago and a full length is due out on No Idea sometime this year, this is not too be missed, check out some jams here …

The Owl Gene – First Portsmouth outing for Basingstokes The Owl Gene. Having played in Driveway Speeding and Servo, Jez is now playing beautiful acoustic tunes on his lonesome.

Kelly Kemp – One of Portsmouths/Plymouths finest! If you haven’t witness Kelly’s solo show or as part of Livers & Lungs you’ve missed out!

The Buildings, they are sleeping now – Another visitor from Basingstoke and also part of the awesome Black Heart Orchestra, self descibed as
“A boy who cant sing, cant play guitar and cant write songs but is trying. Ripping off the likes of Woods, Two Gallants, Neutral Milk Hotel and such along the way, because they are good.”
I disagree, get there early for his set.

Doors are at 8, and its £3 in, this is gonna be a great night, turn up, get boozed and spread the word!