The series takes place from May 25 to June 24 and is made up of rounds of fast-paced circuit racing with teams competing to place their riders in the highest positions. Portsmouth’s event will take place on June 1 and be shown on ITV4 the next day. The final route has not yet been drawn up, but council officials are considering a route including Serpentine Road, Clarence Parade, Avenue de Caen and the seafront.

On the day there will be children’s races and cycling demonstrations, as well as cycle-themed events for residents and visitors before the race starts at 7pm. Portsmouth City Council is also working with schools before the event to get children involved with cycling.

Mick Bennett, technical director for the Halfords Tour Series, said: ‘We are extremely pleased to have Portsmouth join us as a host venue. Bringing residents and business together in an afternoon packed full of activities based around cycling, Portsmouth will help celebrate the best of British cycle racing as well as promote a healthier way of living.’

Drusilla Moody, Portsmouth City Council’s tourism and visitor services manager, said: ‘We’ve worked hard to bring this event to Portsmouth. Cycling has become more and more popular, with the success of British riders in the Olympics and a new British team in the Tour De France. And of course, more and more people are making cycling part of their lifestyle. This will give our efforts to promote cycling another boost and showcase Portsmouth to a big TV audience.’

Check out the Tour Series webiste for all the relevant information at www.tourseries.co.uk/ 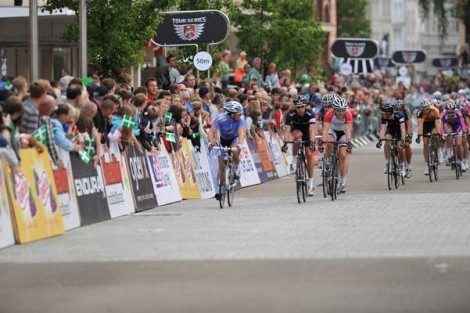 The photo below is from the 1994 British leg of Le Tour De France in Portsmouth. More info HERE.