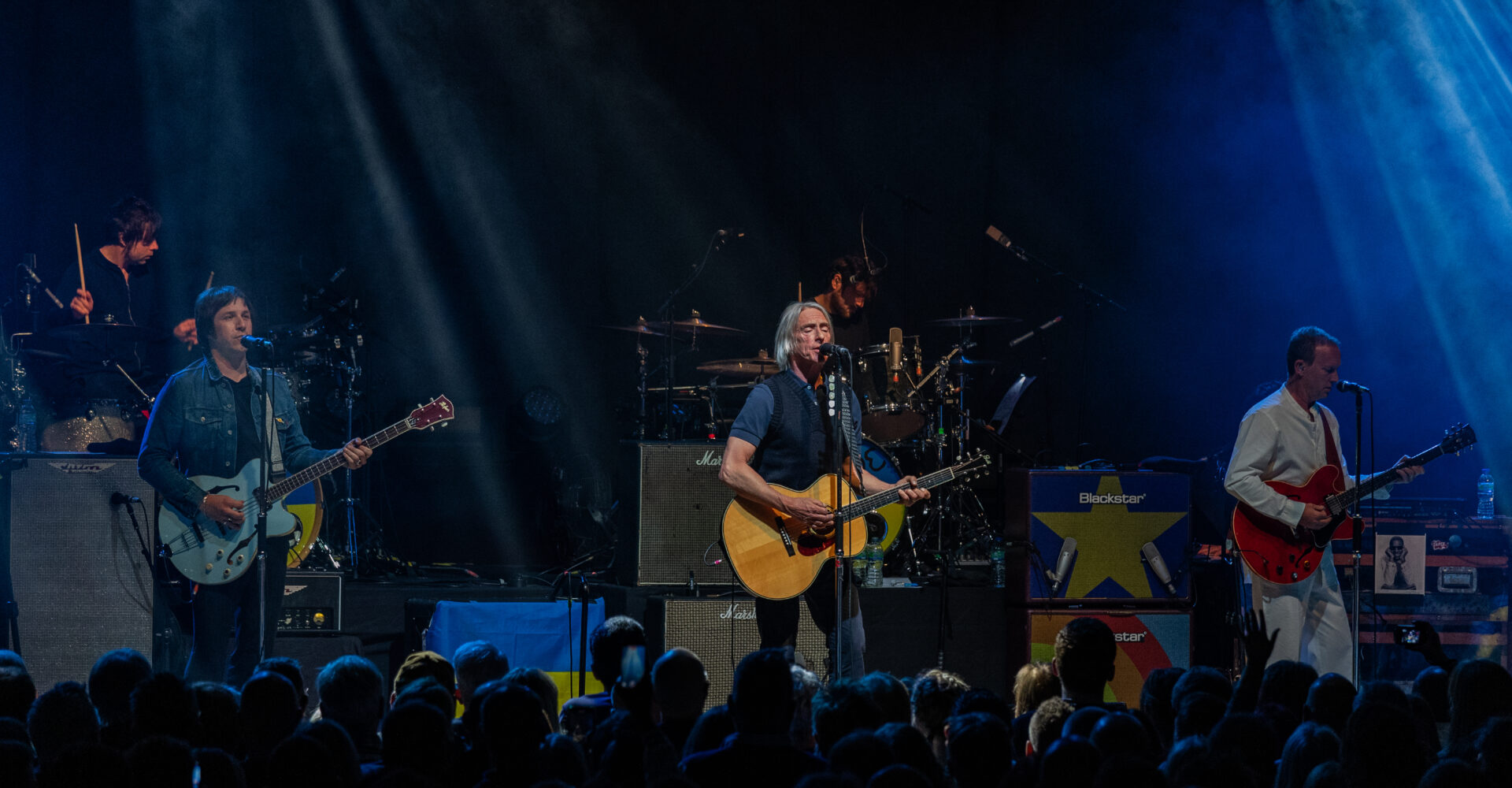 Paul Weller is at the start of a rescheduled 18 date UK tour, this particular show had been planned 3 times previously (in June 2021, March 2021 & May 2020), so this date at the Portsmouth Guildhall was eagerly anticipated by a sell-out crowd.

There is a huge audience in for tonight’s gig, a packed Guildhall with little room to move, everyone trying to find a little bit of space to see their hero, the ‘Modfather’.

Weller has always had, and will always have a ‘following’, tonight his followers are out in full Friday night force. With groups of guys and couples who have clearly been fans since The Jam days, evident by the Mod clothing and cheers that accompany the first notes of any Jam classic. His fan base isn’t defined by that generation however, as there is a real mix of ages with fans (me included) who found Weller’s early solo album’s of the 90’s, along with much younger elements of the crowd who have clearly been influenced by their parents, but with whom the Weller bug has stuck!

I managed to catch up with a few of the other photographers in the pit pre-gig, Russ Leggatt, Paul Windsor and Derek D’Souza all primed & ready to shoot an icon of British Music. Derek has photographed Paul Weller for over 40 years since the early days of The Jam and is a regular at many Weller gigs. It was good to see him again, having caught up with him at the last Weller gig I managed to shoot, a man with a wealth of knowledge & experience always willing to stop and have chat.

The excitement was building in the room as the lights dimmed and The Beatles played over the sound system, a roar came across the venue as Weller as his band arrive on stage. Joining him on this tour are regulars Steve Cradock (Guitar), Andy Crofts (Bass), Steve Pilgrim (Drums) and Ben Gordelier (Percussion).

Kicking off with ‘White Sky’ and ‘Long Time’ from his 2015 album Saturn’s Pattern followed by ‘Cosmic Fringes’, the opening track from latest album Fat Pop. Three tracks that flew bye and before we knew it we were out of the photo pit and into the crowd (with not much room!).

Next came more of Weller’s solo tunes that included the banger that is ‘From the Floorboards Up’, weaved into this section were two classic tracks from his Style Council days. The brilliant ‘Headstart for Happiness’ and wonderfully soulful ‘Have You Ever Had It Blue’. So good to hear these live.

This was followed by a journey through classic and more recent tracks that included ‘Wo See Mama’, ‘Hung Up’ and ‘Stanley Road’  before Weller belted out ‘Into Tomorrow’, a track straight out of his self-titled first solo album released some 30 years ago in 1992. This track gave drummer Steve Pilgrim the opportunity to show off his skills with an awesome drum solo, this elevated an already outstanding track to new heights and was one of the highlights of the night for me.

By this stage, we were around 1 hour (17 songs) deep into the set with no signs of a let up as Weller states “we are only half way through, it’s going to be a long night” which brings more cheers from the large crowd.

The opening notes of ‘Shout To The Top’  bring the crowd up another level, with arms aloft and voices aloud, this is followed by another Jam classic that I haven’t heard live in a long time as Weller flies straight into ‘Start’, with the recognisable opening bass chords greeted by loud cheers from the ‘faces’ in the crowd (a nod to the mods).

Weller finished up the main set with more in your face guitar anthems in ’Come On/Lets Go’ and ‘Brushed’ before the band head off stage, ready to return for what turns out to be encore 1 of 3! As Weller sits at his piano to slow things down with the popular ‘Broken Stones’ and then, with Weller’s introduction “apparently this is one my most popular songs online, so I guess I better play it” before moving into the unmistakable opening notes of ‘You Do Something To Me’.

Many of Wellers classic tracks have those opening notes which are familiar to us all, and as he picks up his acoustic guitar another of those tracks hits the crowd as the riff of ‘That’s Entertainment’  brings his baying audience into an even more frenzied state. ‘Wild Wood’ closes encore #1 as Weller tells the crowd “this is for the public of Ukraine” to rapturous applause and cheers (the colours of Ukraine also emblazon the bass drum of tonight’s stage set up, a very nice touch it is too).

The band arrive back on stage as they belt out ‘The Changingman’ and ‘Porcelain Gods’, many of the crowd vacate at this point as the band exit once again (and some of house lights come on) only for Weller et al to return once more for ‘A Town Called Malice’ the crowd-pleasing finale that is so often the case at his gigs.

I had last seen Weller perform in Nov of 2021, but tonight felt like a different gig altogether, and that is a key part of Weller’s make up as he doesn’t troop out the same songs from his (very) vast back catalogue of classic tunes. Tonight saw a mix of new album tracks, classic Weller, The Style Council and The Jam but the set was different from previous gigs and that is what keeps his followers going to his gigs year after year, you never know what you’re going to get. But what you will get is a massive 2 hour set of pure Weller energy, consisting of 29 songs and 3 encores!