Portsmouth Distillery – The Jewel In The City̵... 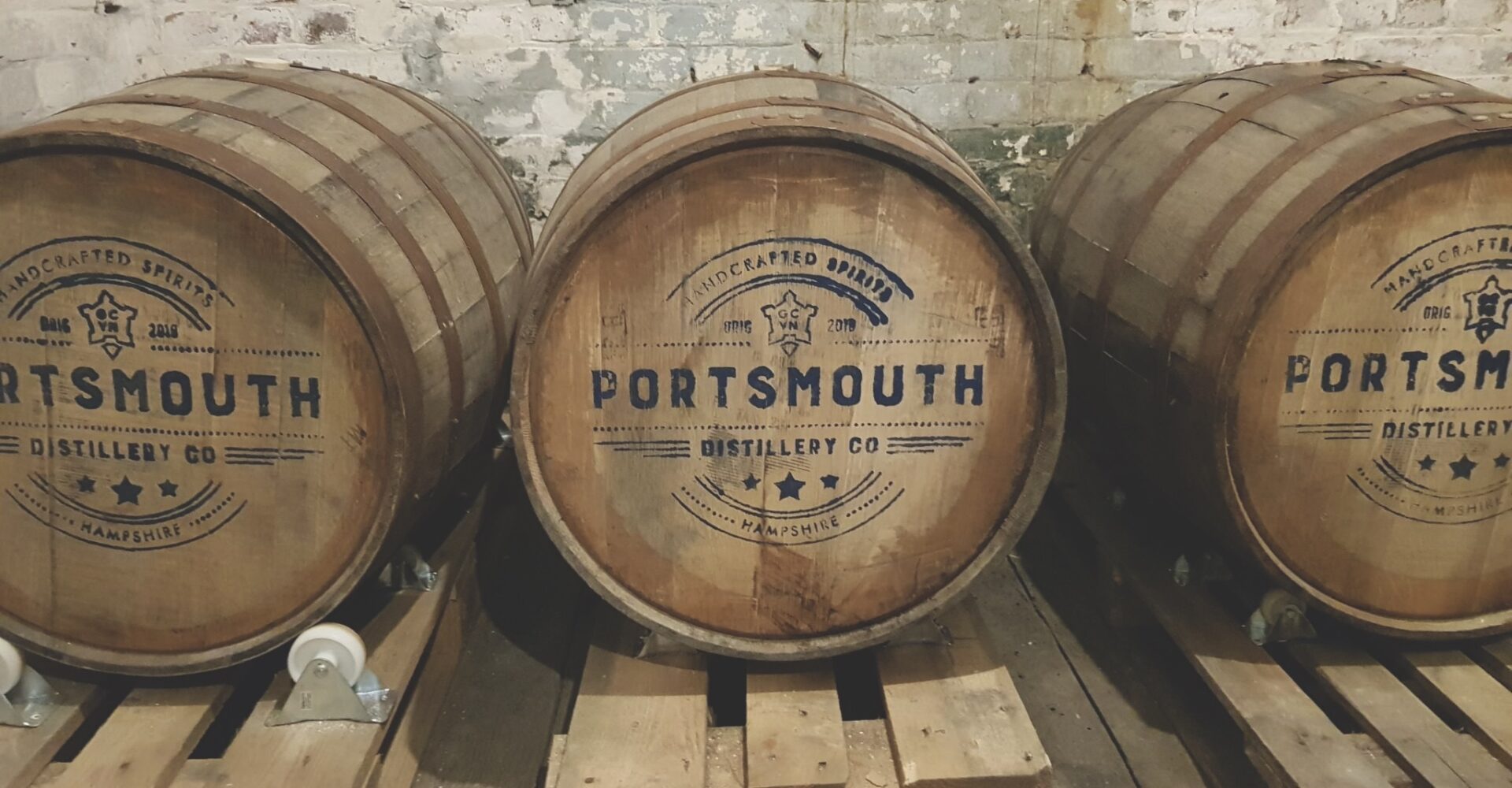 Portsmouth Distillery – The Jewel In The City’s Crown

Nestled on the Eastern most tip of Portsmouth, away from hustle and bustle and amidst the soft swaying sand grasses, is one of the city’s best kept secrets.

For the last five years, I’ve travelled to distilleries by train, plane, car and coach. However, for this trip, I only had to use my feet. The amble to Eastney is easy. The Victorian terraces of my home dissipate into smaller settlement. More parkland appears, few cars roll by, and the sound of the city quietens to the gentle hum of crickets, accompanied by the percussion of swivels clinking against masts in the nearby boatyard. The stillness of this place feels a world away from my street, a mere thirty minutes away. It is a magical transformation.

We approach a large gate with intercom, barbed wire laces the edges of the fence. After some negotiation, we are let through to Fort Cumberland, the star-shaped structure built between 1785 and 1810. This has been built on a previous structure from 1714, and that was built on an even earlier structure than that. The east end of Portsmouth was an important vantage point to guard the channel and against any possible landings from Langstone harbour. The fort, architecturally, is a thing of beauty. It’s red brick flanks prop up a grassy blanket roof bursting with coastal flowers. It is as if the land and the building forged a symbiotic agreement. There is a tranquillity here that sedates the sting of wars long passed.

And it’s here, in this veritable crown of the city that we find a jewel, a diamond in the rough. The Portsmouth Distillery. Set up in 2018, the distillery has been working diligently and relatively quietly, releasing a really interesting and creative range of spirits. It has been a long time since I have been able to venture to a distillery, and it was a really special experience that the first one I attended after lockdown was the first one I could walk to, a true local.

Vince Noyce, Director and keen rum enthusiast, kindly took a little time out of his day to meet us and show us around. As a former Royal Navy Officer, along with Business Partner Giles Collighan, Vince is well versed in navy culture and rum and as such, the fort really does feel like the perfect home for them. The crew are comprised of these two, and Dich Oatley, who I first met at the Gin Sessions, an intimate gin festival held on nearby Hayling Island by former Gin Festival Events Coordinator and friend Naomi Good. And, they now have an apprentice, Josh, who was certainly pulling his weight, beginning a batch of rum, as we stood outside the first casemate making our introductions.

The casemates are the vaulted chambers within the fort, originally used to store gunpowder, cannons and troops in their hammocks. The fort is full of them and in some instances they are unchanged, servicing as glimpses of the forts previous life. Vince and the team have been lovingly restoring the ones they use, a benefit for the fort for sure. The first casemate holds the still, Sophie Wu, and several fermentation tanks. Large bags of dehydrated sugar cane are used as the base of the distilleries flagship rum, 1968. I had tried 1968 when I had met Dich previously and I remember marvelling at it’s unique character. It is commonplace for rum to made from molasses, and with it’s sugar cane base, 1968 was completely different to other white rums I’ve tried. Complex with floral and earthy notes coming through, I found it a fascinating spirit at the time and it remains special to me as the first of it’s kind that I tried, although I am now starting to see some others coming into the market.

From what I gather the rum industry is pretty heated in the way of category and method. Experts are strict with their idea of what is and isn’t, what should and shouldn’t be. There is a defensiveness in the way Vince speaks, and I believe that comes as a result of critique of his inventive processes, offered too often and often unnecessarily. Rum is incredibly special to him, it is as he says, ‘his world’. The idea with 1968 was to use sugar cane as it offered a different character to molasses. However, wet sugar cane juice becomes almost unusable after 48 hours, so the logistical challenge of getting it to the UK in that time is large and costly, not something a young craft distillery can swallow. Dehydrated sugar cane is a simple solution. The product they use derives from organically grown cane and comes from a place in Costa Rica that has been making it for 50 years.

Once the team at Portsmouth Distillery get the dusty brown powder, they boil it down to sugar syrup, so the rum base is half way between molasses and cane juice. Another more unusual process is that they allow fermentation to happen naturally. They don’t heat or cool the sugar wine at all, a process that results in a more complex flavour. Now, I’m more versed in gin than rum for sure, but to me, using dehydrated sugar cane seems like a carefully thought out and creative solution and the result is a wonderfully different and very sippable rum, so that is good enough for me. Being sippable is important to Vince. In fact, in all of his spirits the first objective is that they can be sipped on their own without adding anything. I find this a really interesting concept. As a spirits judge, it is often considered how spirits will work in cocktails and with mixers, as a spirits writer, we are always looking for the perfect serve.

People often ask for the best tonic to use or the best garnish. This sort of thing gets Vince’s heckles up. His view on these things are simple, drink it how you want. His objective is to make spirits that do all of the work. You can drink them on their own. Whatever you do with it after that is up to you. As someone who enjoys sipping spirits, this idea appeals to me a lot.

It seems, that all of the creativity goes into the spirit. Vince is an artist. He paints and that creative artistry certainly extends to his distilling. I tasted a little of a very recent experiment. A little go at a Calvados, using their own Fort Cyder, force aged using oak chips to do the work of the barrel and hazelnuts, as recommended by a friend of a friend and a technique used in Normandy. Just a day old and already the liquid has colour and tastes like Calavados. Depending on how the experiment goes, we could see it released, but we may not. It is what it is. And this idea seems to be a bit of a mantra for Vince. They are currently aging some of the 1968 in Jim Beam barrels. Some for 3 years, some for 5. “My theory is, well I don’t really have one. It will be what it will be.” That said, it is looking very promising, as such that Vince believes it will be his ‘masterpiece’. A year in and little old me was lucky enough to taste it. There is a hint of colour and the heady vanilla bourbon notes have taken lovingly to the rum. With the 3 year due for release in 2022, and the 5 year 2024, it is a spirit to get very excited about.

And they do like to experiment with their spirits. Rather than some distilleries I see that experiment with different flavours, the scope of vision at Portsmouth Distillery is wide. There is talk of a Shrub – an Agricole rum liqueur made with citrus, in this instance orange. There is also talk of a gin rummy being made for someone, yes, it is what you think it is and it sounds pretty amazing. Though, that is also not be confused with their Forum, a refined botanical ‘garden’ rum, with the complexities of gin.

Excuse me for digressing, there is so much to talk about with this place. I mean, we’re here for the gin right? Or at least, to an extent. You may have seen the distillery’s first juniper offering, Fort gin. Recently, receiving a medal in the IWSC, the botanicals include locally foraged elderflower, gorse flower and sea radish. Well, they’ve just brought out something new and it was this that prompted me to get in touch, their recently launched Tudor Gin.

This is only the first half of the article, to read it in full visit www.undertheginfluence.com/distilleries/portsmouth-distillery-the-jewel-in-the-citys-crown. 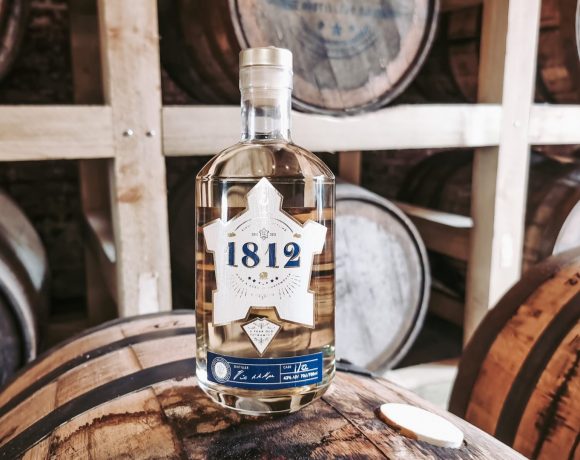