Oyster Design Looking for a Se..

If I could only see one band perform at this weekends Victorious Festival then it would be Saturday headliners and three time Grammy winners The Flaming Lips.

Formed in Oklahoma, The Flaming Lips have been going for as long as I’ve been alive as we were both born in 1983. Despite a few line up changes in that time the eccentric frontman Wayne Coyne and bassist Michael Ivins have been ever present.

Their debut album Hear It Is was released in 1986, while their most recent and fifteenth studio album was last years With a Little Help from My Fwends. As the title suggests the latter is a tribute to The Beatles classic album Sgt. Pepper’s Lonely Hearts Club Band. The album features collaborations with Miley Cyrus, My Morning Jacket, Moby and Tegan & Sara. In the past they have also teamed up with the Chemical Brothers, Henry Rollins, Erykah Badu, Bon Iver, Nick Cave and Yoko Ono to name to just a few.

For many including myself their two stand out albums are Yoshimi Battles the Pink Robots and At War with the Mystics. Between them they feature classics like ‘Do You Realize??’, ‘It Overtakes Me’ and ‘The Yeah Yeah Yeah Song’.

For a long time The Flaming Lips have been charming crowds and rightly earning their reputation as one of the best live bands on the planet. The first time I was lucky enough to see them perform live was across the Solent at Bestival in 2013. They put on a spectacular and colourful performance that wowed everybody in the crowd and I expect more of the same on the Common Stage this Saturday night. When it comes to choosing who to watch this Saturday evening the decision is a no brainer, it has to be The Flaming Lips!

Tickets are still available and you can pick one up via the website HERE, or in person from the Meat and Barrel on Palmerston Road. 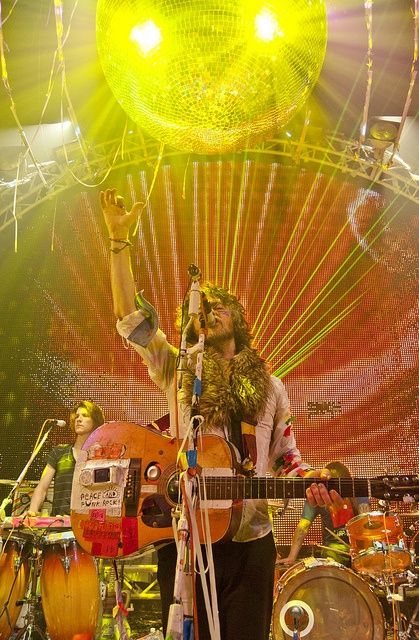