As some of you may know, I’m a skateboarder and I am not originally from Portsmouth. I first moved down to Portsmouth for university in 1995 but I had visited the city previously back in 1990, all the way from Essex to see the King of Vert competition held at the Mountbatten Centre. Back then skateboarding in the UK was still going pretty strong from the heights of the late 80s and the UK professional skaters were still the same ones I looked up to when I started skating and reading the magazines in the mid 80s. The King of Vert competition was my first chance to see these people skate in the flesh.

Our local skateshop had organised a coach trip down so load of us piled in early in the morning of the 17th June (pity the poor driver) and when we got here the BMX comp had begun. I had got in to skating from BMX and still to this day love watching riding. Soon after the skaters started their comp on the ramp (that actually had next to no vertical, despite the name of the competition) and it was incredible to see the likes of Sean Goff, Lucian Hendricks and Portsmouth locals like Barry Abrook too. Skateboarding was changing at this point with more technical tricks on the lip of the ramp being more popular and I was pretty spellbound for the whole day, sat on the bottom row right at the front, right in the middle. At the end of the day we bought some t-shirts, stickers and stuff from the pros, got autographs and made our way back to Essex but this trip really made an impact on me and I guess put good thoughts of Portsmouth at the back of my head when it came to looking for a university to study at years later.

Back then few competitions were videoed, unlike today with live Internet access from the other side of the World, so I was really pleased to find some footage of the competition on YouTube recently. In the skate clip you can even see Barry Abrook ripping, the same Barry who has been part of our Creating Balance exhibition, 24 years later. Beware watching the BMX clip, the incredible 900 attempt ends up in Scott Carroll being knocked out. 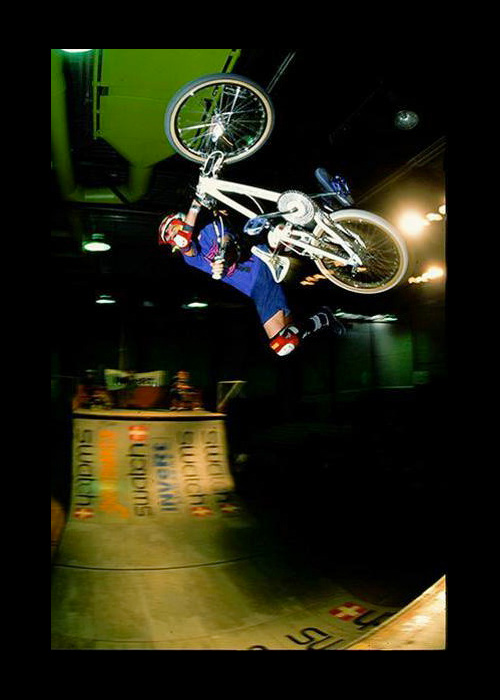 Jamie Bestwick with a turndown cheerokee.