Sculpture at the Stacey Centre

Down For Life - Frankie Talbot

Portsmouth Film Society is a key part of the ever growing non-multiplex film scene within Portsmouth with their film screenings based at The Omega Centre in Somerstown and their annual Shorts::Cut short film festival (read our review of this year’s event HERE if you missed it). PFS’ latest project is their Pop-Up Mobile Community Cinema which aims to develop cinema in relation to community-based partnerships with other local organisations.

The first screening with this project is Academy Award winning The Artist which will be screened at the atmospheric The New Theatre Royal tonight at 7:30pm. This will be followed by Wish You Were Here (on the 6th November), a Hitchcock double bill of Psycho and Rear Window (17 November), and 2012’s box-office hit Best Exotic Marigold Hotel (11 December). Future screenings are planned for Eastney, Southsea, Fratton and Havelock Community Centre.

Find out more at: 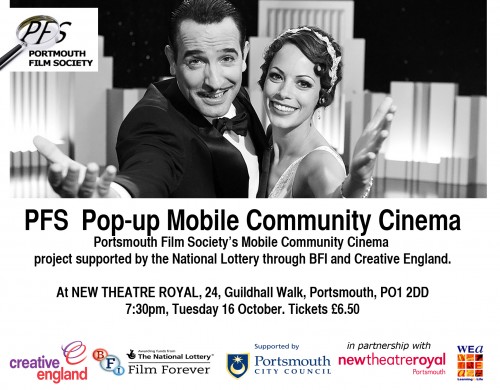