Daniel Meadows‘s career as a documentary photographer, oral historian and teacher spans four decades and as a photographer he is recognised as a prime mover in the new documentary movement of 1970’s Britain. In the early 70s Daniel Meadows bought an old double decker bus and then travelled the UK with his camera to document the country at that time. The bus was better known as the Free Photographic Omnibus and was his home, his travelling darkroom and gallery.

Starting in September 1973 Daniel Meadows travelled to over 20 towns and cities in England over 14 months and one of the places he stopped was Portsmouth. One particular photograph from that visit was ‘Portsmouth: John Payne, aged 12, with two friends and his pigeon, Chequer, 26 April 1974’, first published in 1975 it became widely published and iconic:

“The photograph…offers a window on a lost world, one that is difficult to perceive without considerable culturally-specific contextualisation. Meadows’ photograph is however a masterstroke in providing clues about the life and times of those recorded through his lens. The boys became the subject, although the pigeon had been the vehicle for this particular engagement. In offering up their pigeon (the photograph was taken at their request), we enter a world of friendship and pride, the social activities on a working class housing estate…”

The photo, shown below with the kind permission of Daniel Meadows, is something very special and went on to become one of Daniel Meadows’ most recognisable images and also became part of the Arts Council’s collection as well as being a key photograph the national travelling exhibition organised by the Hayward Gallery called No Such Thing As Society: Photography in Britain 1967-87 (you can read The Guardian’s review HERE).

With such a striking image that in many ways captures the moment and the time it was taken we couldn’t help but wonder, where are John Payne and his friends now? Coincidentally during the 1990s Daniel spent much of the decade trying to find and re-photograph many of the people who he originally photographed during his time travelling around in the Free Photographic Omnibus, resulting in the book The Bus. Sadly, Daniel was never able to locate John Payne but Strong Island are working with Daniel in trying to find John and his friends, and we need your help.

If you have any information please leave it as a comment or email us at contact@strong-island.co.uk. You can also help by sharing this post on Facebook, blogs, websites, Twitter, etc to get the word out there as much as possible!

You can find out more about Daniel Meadows’ work below and I really recommend his book ‘Daniel Meadows: Edited Photos from the 70s and 80s’, something very special. You can watch a short video all about the bus HERE. 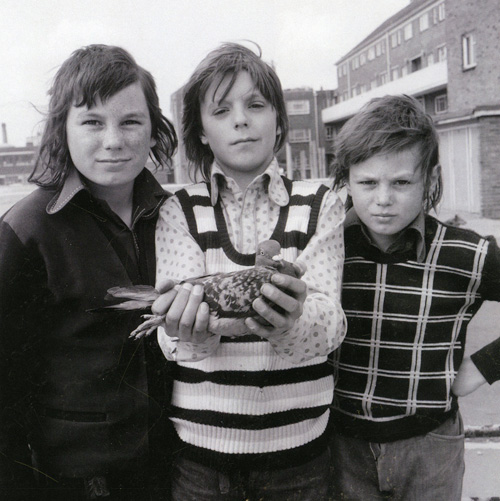