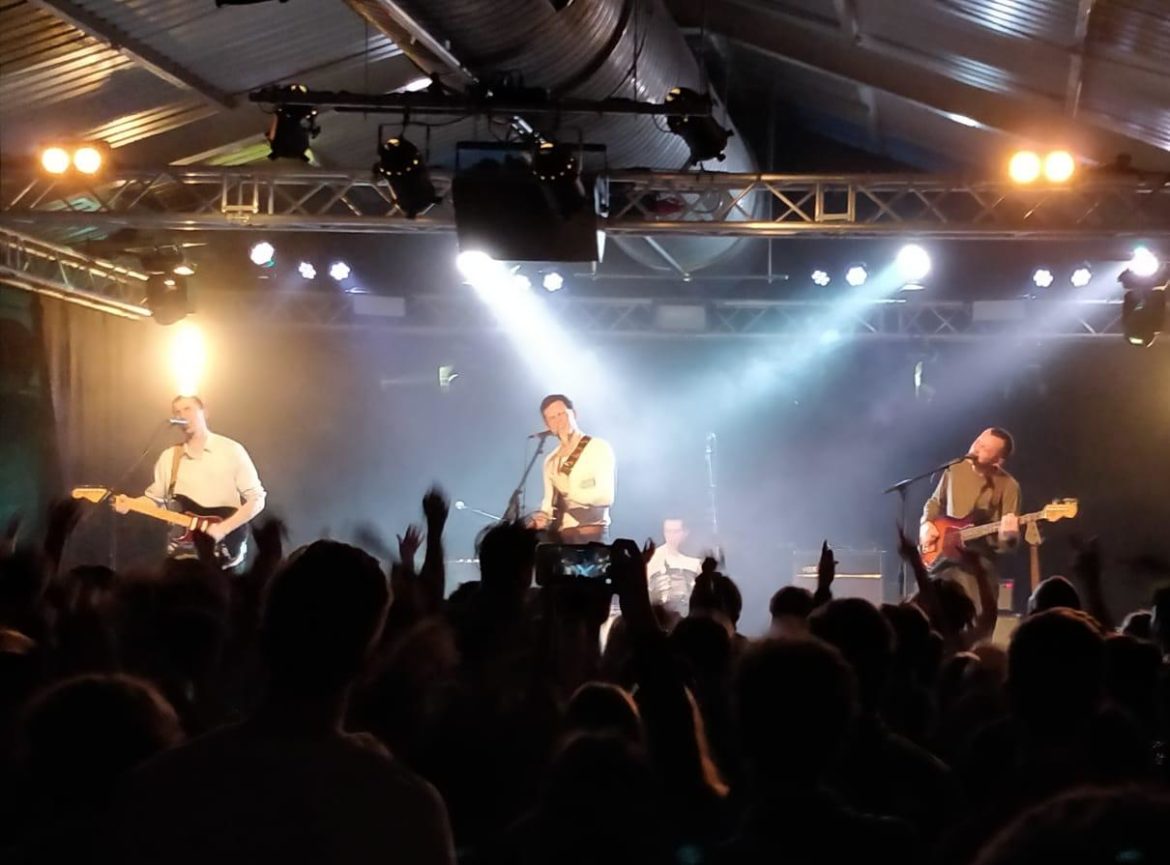 Signed to ex-Maccabee Felix White’s label Yala! Records, Brighton based The Magic Gang released their rather excellent self-titled debut album last year. Certainly one of my favourite records of 2018, they offer a refreshing change to the blanket of hushed vocal led electro that seems to be deriguour at the moment for any new band breaking out. Having been critically lauded – The Times called them ‘Britain’s best new guitar band’ in one review –  their sound lies somewhere between blue album era Weezer and the harmonious pop of Teenage Fanclub and The Beach Boys.

Tonight’s show is one of three they have lined up as part of a series of gigs presented by DJ Phil Taggart. His own DJ set – sandwiched between Northern Irish punk band Touts (who deliver a spikey set of pop punk which reminded me a little of The Subways and Hard-Fi) and the headliners – was a mixed bag with everything from Kendrick Lamar to the theme tune from Only Fools and Horses being played. Taggart ends with a drum n bass remix of Oasis and it’s not only myself who’s left a little bemused. Entering the stage a couple of minutes later, guitarist Kristian Smith humourously wonders aloud “how can we follow a dance remix of the greatest band of all time?”

Kicking off with ‘Alright’ with it’s fuzzy guitar lines and power chords the band highlight a lively, amiable stage presence. Obviously resonating with the youthful crowd the massed ranks eagerly sing back the repeated lines of “All I really want to know” in second song ‘All this Way’s’ chorus. The band are a competent bunch, each taking turns on lead vocal duty whilst instruments are also swapped – most noticeably when bassist Gus Taylor swaps his guitar for a keyboard for the Ben Folds tinged ‘I’ll Show You’.

Most of the set is comprised of tracks taken from the album with ‘Caroline’ a highlight midway through the set also includes a couple of first plays of new material. Both ‘What have you got to lose?’ and ‘Give me just a minute‘ aren’t a million miles away from their previous output though this is no way a bad thing with the multi-layers of each song being tied together with those pitch-perfect harmonies.

The band end the set with a triumphant ‘Getting Along‘ before coming back for a one-two encore of ‘Take Care‘ and ‘All that I want is you‘. Their sound isn’t necessarily the most original thing ever but they’re definitely not your run-of-the-mill indie band. Possessing a keen ear for a melody and a propensity for the sing-a-long chorus their songs are harmonious, joyful and on the evidence of tonight’s show – smile-inducing.