Visit to Portsmouth by Sir Ken..

The Scottish play is coming to the atmospheric setting of the Square Tower in Old Portsmouth this week. The Southsea Shakespeare Actors, who performed Shakespeare’s The Comedy of Errors at the Station Theatre, Hayling Island last November, are swapping tomfoolery and twins for blood and revenge in their production of Macbeth, showing from 12th-15th March.

Rob Bartlett, who plays the title role, tells us why the play is so popular among theatregoers, and what the audience can expect from this production.

This is one of Shakespeare’s plays that most people know at least a little about, whether it be the ‘is this a dagger I see before me’ quote or the infamous character of Lady Macbeth. Why do you think it holds such appeal for audiences?

I think it’s because of the mix of supernatural, unbridled ambition and human weakness – we may not all do what the Macbeths do, but we’ve thought about it! If we were given a supernatural push and told by powers beyond our understanding that it would all be okay, we might just act on those impulses more often.

I also think it’s because Macbeth’s descent into madness is so well observed and written that it makes it utterly compelling, and a joy to play. In one line ranting and in the next line totally lucid. The jerkiness of his thoughts makes it a perfect portrayal of manic behaviour.

The play also barrels along at a heck of a pace – there isn’t the flowery poetry of Romeo and Juliet for example, it’s all plot, character and action. I also think that almost every character gets their moment in the spotlight – Lady M and Mackers obviously, but Malcolm, MacDuff, Lady MacDuff, Banquo and even the Porter get their chance to shine (to name but a few)!

There’s a superstition in the theatre world that it’s bad luck to mention the ‘M’ word on the night of a performance, regardless of the play. What’s that all about?

To be honest I have no idea!!! I talk about Macbeth all the time. I think there was some talk about bad things happening on various productions but to me it seems like a good way to get some publicity!

You’re performing at the Square Tower in Old Portsmouth – how do you think the setting will lend itself to the atmosphere of the play?

I think it will be brilliant! A big bare stone building, dimly lit with lots of shadows bouncing off the walls, candles – it will be fab. Also by doing it ‘in the round’ the audience will be really close. They will feel like they are in the scene, not just watching it. There will be times where they can’t see the face of the actor who is delivering the lines but that wont matter, a bit like when you are out with a big group of friends. You can’t always see the face of the person talking but you get a sense of what’s going on from everyone around you – and yes, that will include the other members of the audience on the opposite side of the room who can see.

We are doing some scenes with candles, so it will be really dim – really atmospheric!

Can you sum up in one (short!) sentence what we can expect from the Southsea Shakespeare Actors’ version of Macbeth?

It’s up close and personal – be ready to be part of the action!

To book tickets go to http://ssa.ticketsource.co.uk/events or find out more about the Southsea Shakespeare Actors at www.southseashakespeareactors.com. 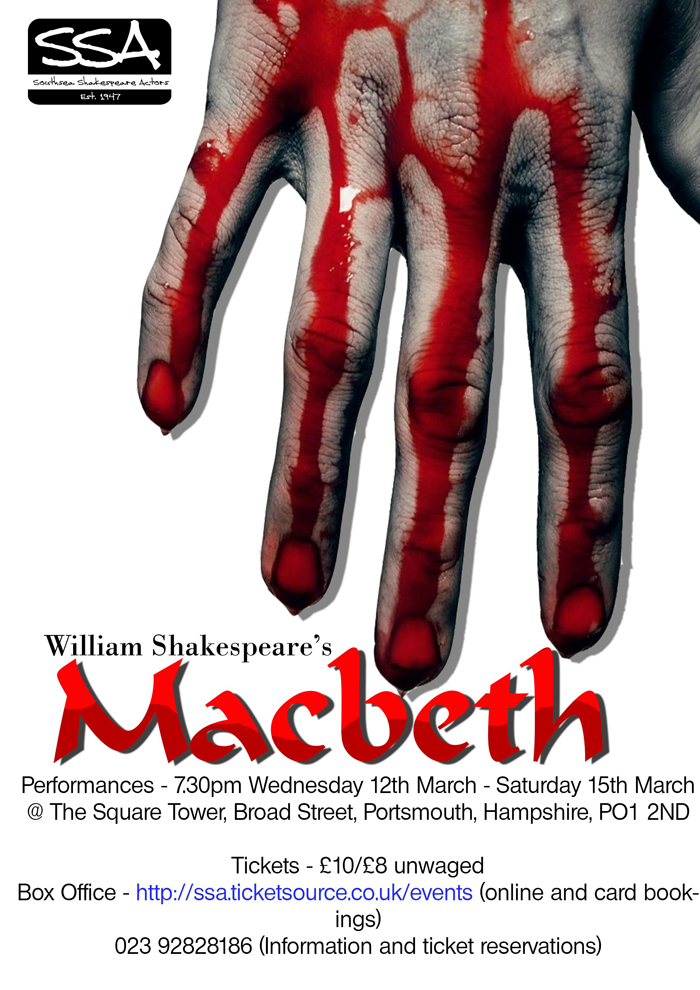