The Silhouettes & Follow Wyliss @ The Edge Of The Wedge

On Tuesday 14th May BC Promotions presents a selection of excellent bands at the Edge of the Wedge. The line up includes bands Follow Wyliss, Forever Can Wait, Henry Crew & The Monarchy and Portsmouth favourites The Silhouettes.

On the night there will be raffle tickets available also for £1, prizes include a £100 voucher for Chilli tattoo, a voucher for Pie & Vinyl and a range of prizes from a variety of shops along Albert Road.

The Silhouettes
The Silhouettes where established in the summer of 2009 with brothers Mike and Steve Frost, as an acoustic duo, playing music influenced by Reggae and Ska. The Silhouettes are now probably one of the busiest bands in Portsmouth having played over 50 shows last year including the Victorious Vintage Festival at Portsmouth Historical Dockyard. 2013 looks bright for the Silhouettes as they recently performed at The Wedgewood Rooms in the Road 2 Blissfields, coming in the top 5.With recording planned for this year the band’s debut release is imminent and hopefully it will enable the band to spread their music to a wider audience. For now, it seems for the silhouettes, the only way is up!

Follow Wyliss
An Alt. Rock band from Surrey. With plenty of shows under their belt already, Follow Wyliss have had the opportunity to share the stage with the likes of Lower Than Atlantis, Kids In Glass Houses, Deaf Havana and many more. Making appearances at festivals including Butserfest on the main stage and a top three spot on the second stage at Redfest. A lively set with a diverse set pulling in the audience for a high energy set.

Forever Can Wait
Forever Can Wait are a 5 piece female fronted band from Southampton who formed in October 2009. After 2 years of gigging, the young quintet have made their mark on the Southampton scene by relentless gigging and also touring across the UK. The young 5 piece are known for their upbeat, exciting shows and always keeping the crowds attention. With many reputable shows under their belts and having played both Butserfest and Takedown Festival, they have had a lineup change and are now ready to release a new EP for 2013!

Henry Crew & The Monarchy
An acoustic/indie/melodic rock act from Petersfield forming in November 2012. Gigging solidly since their formation, they have built up a solid fan base and have released two music videos already. They definitely have a buzz growing around them and have great things to come. 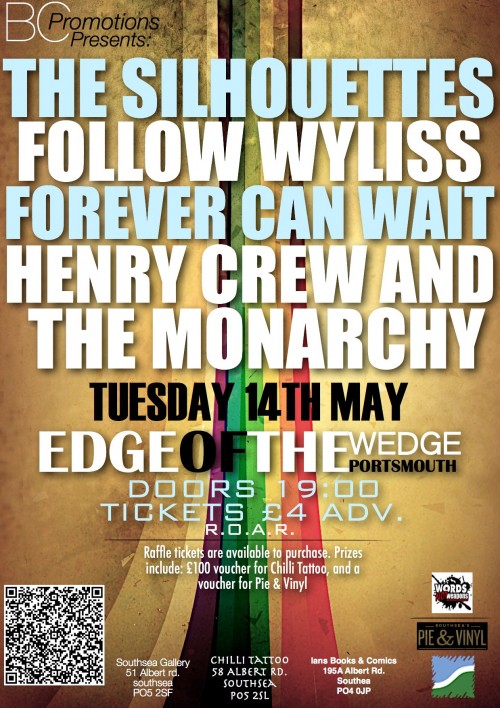 Follow Wyliss, Forever Can Wait, Henry Crew & The Monarchy, The Silhouettes. Edge of the Wedge