“Our music is living testimony to the fact that cultures can and do mix. It unites us and gives us strength, and offers a vibrant celebration of our multicultural and multiracial society. Racism seeks only to divide and weaken us. Love Music Hate Racism (LMHR) was set up in 2002 in response to rising levels of racism and electoral successes for the far-right British National Party (BNP). The recent spate of hatred on our streets surrounding the neo-nazi English Defence League (EDL) prove our campaign is just as important, if not more so, than it was a deceade ago!

We use the energy of our music scene to celebrate diversity and involve people in anti-racist and anti-fascist activity as well as to urge people to vote against fascist candidates in elections. LMHR has helped to mobilise against further BNP election victories, in the tradition of the Rock Against Racism (RAR) movement of the late 1970s.

There have been now been many hundreds of LMHR events, from large outdoor festivals to local gigs and club nights. Top artists who have performed at LMHR events include Ms Dynamite, Hard -Fi, Babyshambles, Akala, Get Cape Wear Cape Fly, Estelle, The View, Lethal Bizzle, Roll Deep and Basement Jaxx. Just as important are the up-and-coming bands, DJs, MCs and their fans who have performed at or organised their own local LMHR nights.

We want to create a national movement against racism and fascism through music, so it’s vital everyone gets involved however they can.”

For tickets and further information please head over to Facebook and The Wedgewood Rooms. 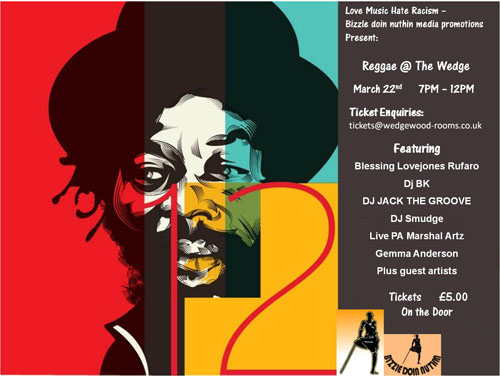