Southsea Gallery at The Wine V..

Artist Pete Codling has recently started creating a giant charcoal drawing directly on the SPACE gallery wall in Eldon Building, Winston Churchill Avenue. The building, which will be demolished in November along with this final artwork, was actually Codling’s old studio space when he was a student at Portsmouth College of Art in the late 1980s.
This ‘charcoal epitaph’ is a personal way for the artist to say good bye to the building but also to celebrate the creativity of many artists, designers and musicians who have used this space over the last fifty years. This drawing on the main wall will be nearly ten metres by  five meters with other smaller walls being included in the composition. The artwork will be inspired by classical mythology from his travels in the Mediterranean and will refer to Portsmouth and the history of the building.

Some of you might know of his work around the city such as the One Million Pebble project on Southsea beach and his sculptures at the John Pounds Community Centre on Queen Street in Portsea.

One Million Pebble project UPDATE – If any of you have found any of these washed up the shore then Pete would love it if you could send him a picture and even send a picture of the pebble being put back onto another beach – perhaps on your holiday this summer? I found one a few years ago and will take this to the Gower Coast with me this year. See more on the project here – http://www.petecodling.co.uk/one_million_pebbles.htm

If you are passing, feel free to drop into SPACE to talk to Pete Codling about his drawing or if you would prefer to make an appointment, contact him on pete@petecodling.co.uk 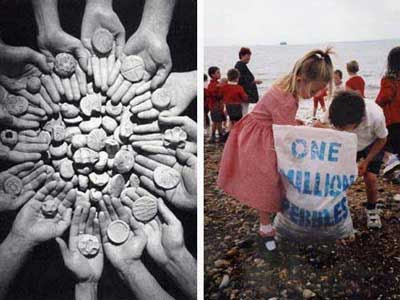 Photo below by Bob Franklin