With Portsmouth’s long history and particular geography it’s public transportation systems have been varied and have changed dramatically over the years. Over the next few weeks we are going to focus briefly on some of the more interesting ones, starting with the Portsmouth Trolleybuses.

The Portsmouth Trolleybus service provided by the Portsmouth Corporation was first introduced on the 4th August 1934 and covered most of the island and up to Cosham. The trolleybuses themselves were like normal double decker buses but were powered by overhead power cables like trams. The power lines for the trolleybuses criss-crossed overhead above the roads with routes and these wires became a constant in the city’s skyline, much like modern San Francisco and Vancouver. 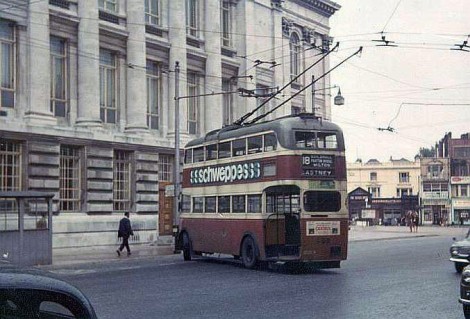 The trolleybus service continued until the 27th July 1963 and then sadly the wires torn down and almost all of the trolleybuses scrapped, today only two of the trolleybuses survive. No. 201, which was in Portsmouth’s transport museum before being moved, now lives on display in Milestones Museum in Basingstoke. No. 313 was the very last trolleybus to run but now is in fully restored working order and running at East Anglia Transport Museum (see it running here). 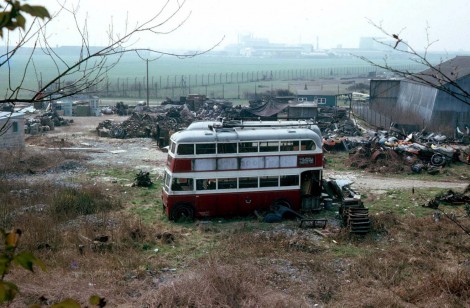 Ready for scrap (with the old airport in the background)

You can find out about all of the trolleybuses and see more photos here and watch below to see them in action with super8 footage from the 1950s and 1960s. Still looks strange seeing traffic through Guildhall Square.

P.S. Will the Portsmouth transport museum ever find a new home?