Review: Jamie T ‘The Theory Of.. 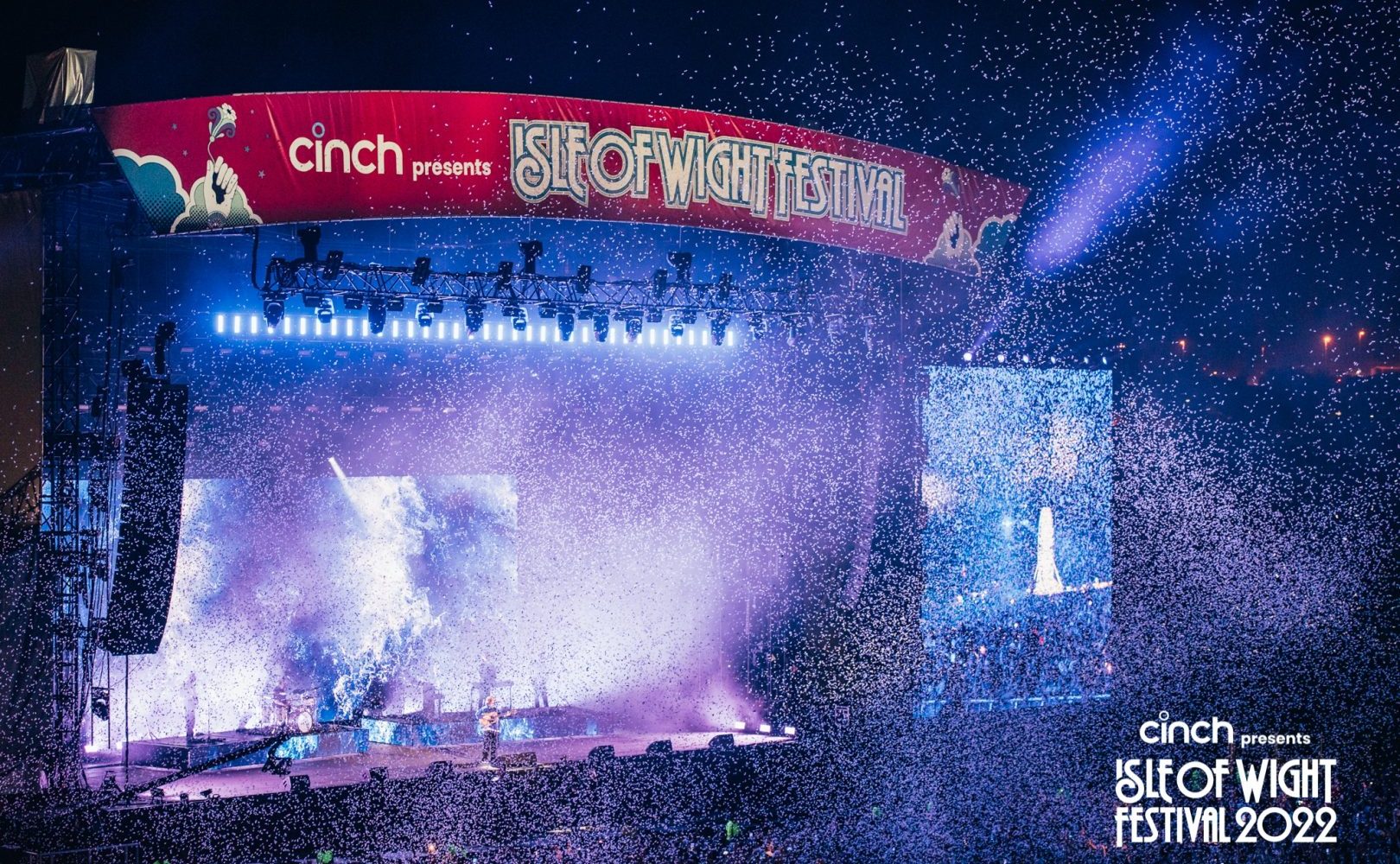 The best thing about the Isle of Wight Festival is the variety of music and venues to pick from, the choices are endless and we had an amazing weekend!

This years IOW Festival returned to its usual, early summer, June slot (after taking place in Sept 2021 and being cancelled in 2020). As is often the case for me, I spent much of the 2 weeks leading up the festival checking all & every weather app possible! The weather can make a big difference to festival life and this year it was great, all bar a little bit windy on Saturday which affected Blossoms performance and dare I say it (a little too hot at times!)

We arrived fresh faced and full of beans on Thursday afternoon and checked in to our Pink Moon camping area (at my age I am not putting up my own tent, fighting for space and not being able to have a shower!). We headed straight to the Hunky Dory tent to catch The K’s, we managed to see them twice over the weekend as they also played later on Sunday evening at the River Stage. Both sets were absolutely brilliant, they belted out tracks including ‘Got A Feeling’ and ‘Glass Towns’ along with their awesome 2017 debut single ‘Sarajevo’, plus latest single ‘Hometown’. They even got a 9-year-old super fan and future ‘rock star’ Dylan (from Strong Island territory in Portsmouth) up on stage to sing backing vocals and crowd surf! This was great to see, and the lad loved every minute of it. If you aren’t familiar with The Ks then check them out, with songs referencing everyday life in the style of Paul Weller, The Strokes & The Libertines, they have previously opened the Main Stage at the IOW Festival and are also set for outings at Victorious Festival and Reading & Leeds in 2022.

The remainder of Thursday saw us move between multiple venues such as the Hipshaker Tent, the Old Mout Cider Kiwi Camp (which became a favourite hangout for the weekend) for some Rockaoke (I didn’t sing by the way!) and the This Feeling stage where we saw Overpass. In the Big Top we caught a brilliant set by The Compozers (me and the wife even ventured into the mosh pit!!) and we ended the day back in Hunky Dory for a silent disco.

Friday at the festival was very hot, ideal for spending most of the day sitting around the campsite chatting to other festival goers over a cider (or three) about bands & artists who they have on their ‘must watch’ list. I love this part of festival life, it feels like a real community and you learn about acts you potentially wouldn’t have considered seeing.

The first act we caught up with was The Vaccines who opened up the Main Stage with a cracking set that included ‘Teenage Icon’, ‘Post Break-Up Sex’, ‘If You Wanna’ and ‘All In White’ with frontman Justin Young giving his usual flamboyantly engaging performance.

We were graced with the amazing sight of the Red Arrows (not a new band but the actual flying Red Arrows) who completed a fly past over the festival site at 6pm. Beautifully British in every way.

The Friday night Main Stage line up consisted of disco funk with Nile Rodgers & Chic, general madness with Madness and mass sing-a-longs with Lewis Capaldi. We had seen a number of these acts before and decided to head for the Big Top to catch The Snuts (brilliant set) and Sea Girls (another brilliant set). The climax to Friday night in the Big Top was Craig David & TS5, however we had gone a little heavy on Thursday night and we were done before he came on stage (from what I have heard his set was amazing). Giving fans everything they wanted including ‘Show Me Love’, Nothing Like This’ and of course ‘7 Days’.

Saturday kicked off with us heading to the Main Stage for The Fratellis followed by a four-piece indie rock band called Lighthouse on the This Feeling Stage. There were a few bands on my ‘must watch’ list for the weekend and The Amazons were one of those, they rocked the Big Top during their Saturday early evening slot to a packed-out crowd. Treating us to a raucous set list including ‘Ready For Something’, ‘In My Mind’, ‘Doubt It’ and the brilliant ‘Black Magic’ to finish. One of our standout sets of the weekend.

We headed over to the Main Stage for Blossoms set that was unfortunately hampered by sound issues at the start and was ended abruptly after only 7 songs due to high winds. They did manage to treat us to ‘I Can’t Stand It’, ‘Your Girlfriend’ and new single ‘The Sulking Poet’ before heading off stage early.

Luckily the winds dropped down in time for Kasabian to take to the Main Stage, Serge and the band were on top form belting out a blistering set including classics such as ‘Club Foot’, ‘Underdog’, ‘Shoot The Runner’ and ‘Empire’ alongside newer tracks ‘Scriptvre’ and ‘Chemicals’, that was given a live performance debut. The final track of their set was the stomping, crowd jumping favourite ‘Fire’ which included the appearance of football (and podcast!) legend and Serge BFF Peter Crouch moshing on stage with his bestie! Serge has really stepped up to the mark with the bands new line up and this set was hands down the best of the weekend.

The final act on Main Stage for Saturday was the legendary (and that’s no exaggeration) Pete Tong presents Ibiza Classics performed alongside the fifty-piece Heritage Orchestra conducted by Jules Buckley. His set was lapped up by the huge crowd with new, fresh and different versions of classics such as ‘You Got The Love’ and ‘Insomnia’.

Sunday saw a more chilled start to proceedings as we watched (didn’t participate in) some Disco Yoga in the Old Mout Kiwi Camp, before heading down to the Big Top for what was our most eagerly anticipated band of the weekend. As Wet Leg took to the stage on Sunday afternoon in a jam-packed Big Top, I have never seen the tent that full or witnessed such an atmosphere, filled with excited anticipation. The IOW band fronted by Rhian Teasedale & Hester Chambers looked slightly surprised but smashed their set out of the tent, the park, the island! Their set included ‘Wet Dream’, ‘Ur Mum’ and ‘Angelica’ before climaxing with the emphatic ‘Chaise Longue’. Just brilliant is all I can say.

We then headed over to the River Stage to catch The Novatones and another chance to see The Ks perform their second set of the weekend (along with your Dylan on stage again).

We wondered back up to the Old Mout Kiwi Camp for en entertaining evening of ‘Rockaoke’ and even came away with a souvenir tambourine!

Our last stop of the whole weekend (a little weary I must say) was to catch a little bit of The Kooks set in the Big Top, we didn’t last long though as we were done and our tent was calling, along with a hot chocolate!

As you can see there really is something for everyone at the IOW Festival and doing everything you envisage is impossible! We always have best laid plans to watch this band and that band, and things change! I have been going to the festival for year’s and this year I found new areas, new tents and best of all, new artists who have a firm position in my current playlists.

Next years IOW Festival take place at Seaclose Park in Newport on 15th – 18th June, we will be there, regardless of the line up and I recommend you should be too! 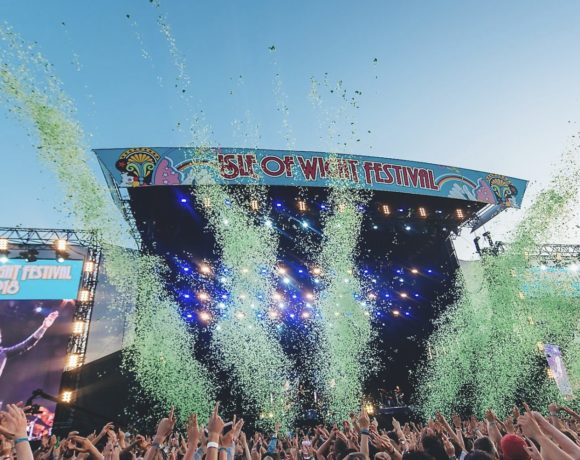 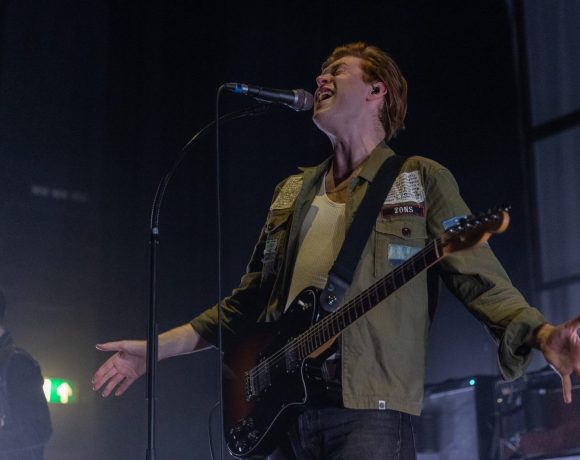