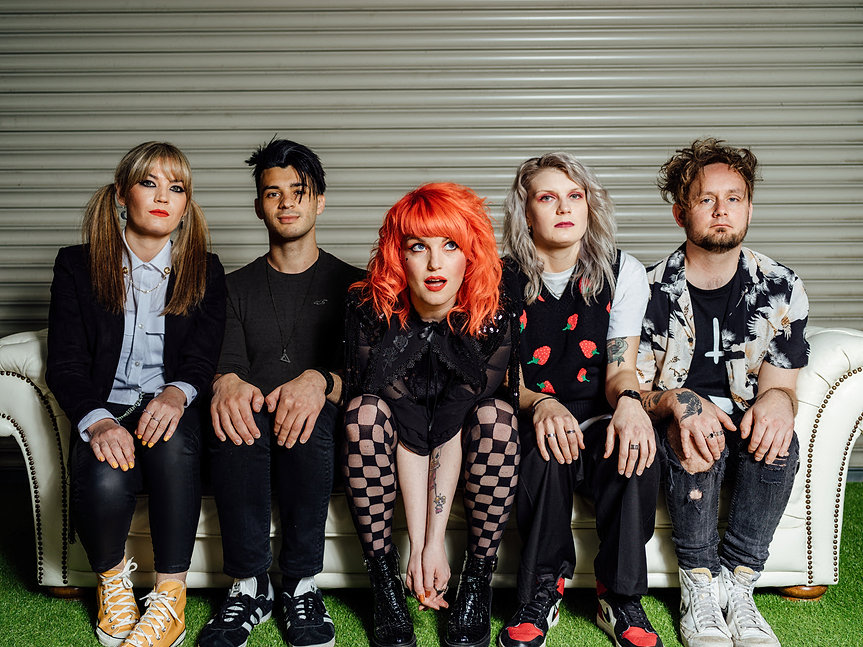 Salvation Jayne are a five-piece rock group consisting of frontwoman Chess Smith (pictured centre above), Tor Charlesworth (drums), Holly Kinnear (guitar), Erim Ahmet (keys) and Dan Lucas (bass). The Kent-based band are about to embark on a UK tour in celebration of the release of their debut album, A Mouthful Of Magnificent Spite, which is available for pre-order now, with the official release later this month.

I was fortunate to catch up with Chess to find out more about her, the band and what to expect if you get yourself to their Southampton show at The Joiners on March 11th.

Strong Island: Could you tell me about how you initially got involved with music and who influenced you most?
Chess: I have no idea… My Dad played ABBA records every weekend, my Mum Led Zeppelin & Black Sabbath. I was born in a non-musical family apart from having a sister who went to band camp and listened to artists such as Alanis Morrissette amongst other really cool songwriting artists. I just was born a bouncy, noisy baby with no influence to do music really. Still no change haha!

Could you tell me about how the band came to be formed and what inspired the band’s name?
The band formed through Dan’s studio…. Anchor Baby Recording Company. All of us had recorded there at some point over the years. Dan & Holly started the band and then found us along the way.

The name is such a boring story haha! Still trying to think of a better one! They basically had a gig booked but with no name. Sat in a cafe before going on stage to try and think about a name. The cafe said ‘Formally known as Salvation Jane’. They liked it.. chucked in a ‘Y’ and it stuck.

Can you describe how you felt whilst after you’d released your first single?
That feels so long ago haha! But nothing compared to how we will feel with releasing our first album!

For those who are new to your music which three tracks would you encourage them to check out first and why?
Violent Silence, Diadem & Apathetic Apologies! Hard to choose 3 but these ones have my proudest lyrical moments. Lots of attitude!

What bands and artists are you currently listening to and how are they inspiring you to explore and implement new ideas with your music?
I’ve been listening to Modern Error. The singer Zak last minute came to shoot our music video for our last single ‘Apathetic Apologies’. Walking completely randomly into our lives days before his album launch. Had to check it out to not be rude and bloody been in love with it since! So it has been on repeat!

Over the years has your approach to performing live changed and if so how?
I have to have at least 3 JD & cokes these days haha. Gone are the days I can get up on stage and not feel tense sober. Or feel like my day self with a thousand thoughts I’m my head. Tense as in ‘can’t leave the day behind and feel loose’ not because of feeling nervous. I like to be energetic on stage to get the stresses out and like to feel every sound bouncing off the walls back at me. A very happy place for me.

Do you prefer to share new music live where you can see the crowd’s reaction first hand or online perhaps?
I think it’s always good to get it out online first to be heard. Prepares them for the live version. Nothing beats when the audience knows the lyrics and sings them back! When they hear it for the first time live, not have heard it before it’s interesting to see how people react. Amazing when they do react!

It has been great to see festivals called out for their lack of female representation in their line ups. Have you noticed an improvement in the way the music industry respects women over recent years?
It’s improved about 10%, haha! If we’re talking percentages that is. It still needs so much more work and awareness! So much respect for companies like Natal & Marshall who are pushing things equally! Come on ladies!!!

The music industry definitely needs more equality. Sometimes we do get promoters that suggest other female based bands to support us but our response is “Yeah, it’s great to support women, but what has our sex really got to do with the sound of the music?” We’re mostly just about that be honest, writing good songs and leaving anything else at the door. And it’s like you’re put in a box because you’ve got females in the band??? Sometimes the style of suggested support bands is totally not suited, but it’s just because they have females in too. It’s sad that we have to think about it. Shouldn’t have to be a thing. It’s sometimes like people can’t see beyond someone’s gender, rather than what the music is.

What can those fortunate enough to have tickets expect from your live show?
Inflatables! Haha! A mouthful of magnificent bass fuzz, big riffs, huge hooks, an energetic atmosphere & more inflatables!

While on tour do you get very much time to explore the towns and cities that you are playing?
Actually yes we do. We love a good service station but if it’s an early soundcheck we love going to a local pub in the area with some good food & pint!