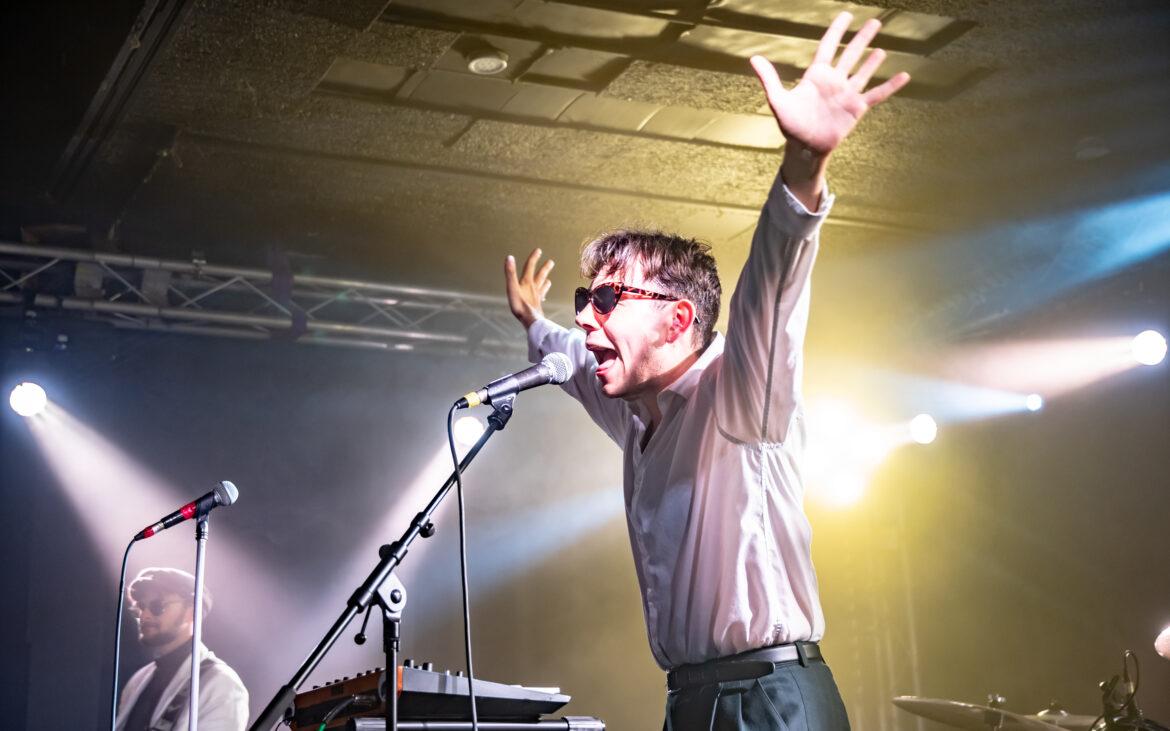 On Wednesday (8th) I was invited by Sam at Brutalist Management/Calamity Cratediggers to head down to the Wedgewood Rooms to catch local band Hallan’s headline show. Hallan have been on the local circuit since 2018 and are a band that I have been meaning to catch for a long while so I was happy that I was able to get down to the Wedge to cover the gig.

Hallan are a 4 piece post-punk band from Portsmouth with Conor Clements on Vocals, Josh Ransley on Guitar, Josh Tweedie on Bass and Adam Mills on Drums. The band cite their influences as The Fall, The Smiths, The Clash and George Harrison amongst others. They have received some good airplay on Radio 1 and BBC 6 Music over this last year with their single ‘Modern England’.

I headed down to the venue early doors to make sure I caught both the support bands and also managed to catch up with Nikki from ‘Mix It All Up’ who was photographing the night as well. Portsmouth based band ‘Fake Empire’ were up first and are a well-polished, well drilled outfit. I heard great things about the band from friends who had seen them play at Victorious this year. I really enjoyed the set from the three-piece especially tracks ‘Half Man’ and ‘Elders’.

Brighton based ‘Slant’ were up next, I hadn’t heard their music before but was 100% left a fan! Headed by Katy Smith and Frankie Stanley on vocals, the two switched up the duties during the set and very much took the limelight with their hypnotic dancing. In their own words they are ‘drawing glam rock out of the ether and merging it with a riot grrrl evergy’. Check out their singles ‘Haircut’ and disco influenced track ‘La Danse’.

Hallan’s intro music was right up my street, it was traditional Indian music with the vocal reciting a mantra, which very much reminded me of my time in north east India. Conor began pacing up and down the stage to the track almost winding himself up like a coiled spring ready to explode into action! Hallan set included of a mix of tracks from their recent EP ‘Reporting Live From The Living Room Floor’ which was great to be finally hearing these played live.  ‘Re-Runs’ has such a superb driving bassline and along with ‘Hands Up’ are my personal favourites from the band but also still love the track “Habit’ just for the lyrics alone. Conor’s vocals and delivery in ‘Prime Time Lullaby’ really remind me of early Alex Turner. The crowd were in fine form as well especially when Conor went for a little stroll across the front barrier during the set!