Southsea Fest Announcements Of Local Acts Including Curxes, Kassassin Street, Rickyfitts, The Boy I Used To Be & More

On the 20th September one of the finest days in the British music calendar; Southsea Fest hits Portsmouth once again. With a line up already consisting of some of Britain’s best new acts including the likes of Mazes, Laurel, Blessa, Kagoule, Fear of Men, Dinosaur Pile Up and Slaves to name just a small handful, Southsea Fest have announced the local additions to the already tremendous line up.

For our Strong Island Recordings stage in which we return to the sweat pit that is upstairs of bar Fifty Six, we’re delighted to announce the latest additions to our stage: Fresh to the festival and from their NME Radar hype, we bring you Wildest Dreams who delve between enchanting dream-pop and also brooding, atmospheric shoegaze reminding us of a cross between Warpaint, Melody’s Echo Chamber and Cocteau Twins.  We have a more eclectic line up this year and making her debut at Southsea Fest is the immensely talented Eloise Keating who creates hauntingly beautiful electro, dream-pop with mesmerising vocals, one of the city’s best new talents for sure. We are also bringing back the fuzzy, ferocious, tinnitus inducing, sludge filled thrash duo Rickyfitts who shall be opening the Drunken Sailor’ stage, not just one of Portsmouth’s very best live bands but one of the country’s best new live bands, period.  All three will be joining the likes of Blessa, Kagoule, Furs and Kill Moon at Bar Fifty-Six.

Also playing Southsea Fest is extended label family duo The Boy I Used to Be who shall be playing for Pie & Vinyl and bringing their garage pop akin to King Tuff, Unknown Mortal Orchestra and Splashh. The festival also has some fresh blood with Gosport’s brilliant tropical psych pop trio Popobawa making their debut as well as western styled blues/psych, Southampton/London outfit Saint Agnes and ElEPHANTANTRUM taking you into a deep acid like realm of twisted, 60’s inspired psychedelia.

Other locals added to the bill are space rock, grunge Southsea regulars Battery Hens who will be sonically burning holes into eardrums, the bombastic, electro pop duo Curxes, bringing a unique hybrid of grunge, surf and jazz, Jesse Wyldes & The Stallions return to Southsea Fest, Pie & Vinyl’s The B Of the Bang return to Southsea after a summer of festival appearances, doom laden psychedelic outfit The Unknown Soldiers, the colourful indie electro pop, Deluxe Flamingos, the gnarly hardcore punk trio Lucky One Dies First, the dance-able, electro tinged, psych tinted locals Kassassin Street who combine elements of world music to their charming, indie pop  as well  as Matt Jarvis, Big Fin, Sacha, Southsea Alternative Choir, Joythief, Happy Accidents, The Plastic Beats Band and Tom Moody as well as of course the return of the phenomenal Laurel who was outstanding at the couple of sets I saw her at The Great Escape with her full band with one being a packed out Komedia.

Southsea Fest is guaranteed to be another cracker this year introducing you to tomorrow’s headliners in some of the most intimate settings. Tickets are incredibly great value for money ranging from £10 – £18 and can be found HERE. So tell your friends and family and head down to the small independent festival that supports the best in new music and fine local establishments. You can check out some of the latest additions to the line up below. 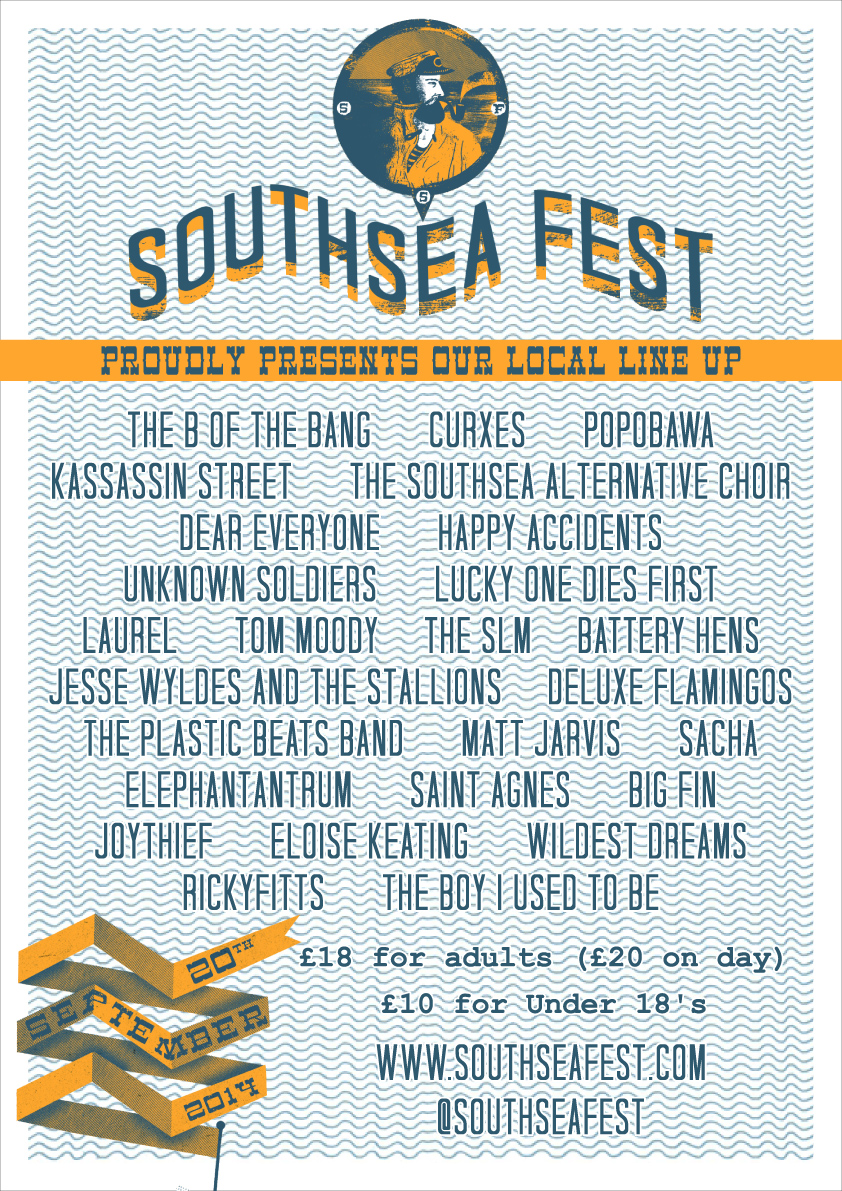