In January the Victorious Festival team announced that the festival will be moving to Southsea Seafront. The team appear to have planned a bigger and better event building upon the success of previous years.

Last week saw the second wave of artists confirmed to perform live. The line up already consisted of awesome headliners Dizzie Rascal, Seasick Steve but they have now been joined by Razorlight, British Sea Power, Slow Club, Foy Vance, Mark Morriss of The Bluetones and The Bog Rolling Stones. There will be DJ sets from Alt J, Terry Hall of the Specials, 2manyDJs and COR. Not to forget some of the best local talent such as Matt Jarvis, Eloise Keating and our favourites the Southsea Alternative Choir are also performing.

Personally I’m really excited about the Sunday line up, I’ve been a huge fan of Seasick Steve for years and I even went to Bestival dressed as him for the Under the Sea fancy dress theme. Sunday also see’s British Sea Power performing, they have been regular visitors to the Wedgewood Rooms during their tours in the past, most recently in April 2013. They are easily one of the best live acts you could ever have the pleasure of seeing. The Saturday headliner Dizzie Rascal isn’t too shabby. I caught him at Bestival in 2010 and I can promise you, he knows how to put on a show and get you dancing!

The event is more than just a music festival, there will be lots going on in the Kids Arena as well a Real Ale Festival featuring many local breweries. For the weekend local seafront attractions will be FREE, these include Southsea Castle, Blue Reef Aquarium, D-Day Museum and Southsea Skate Park. If you would like to be involved in the boutique market then drop the team an email on traders@victoriousfestival.co.uk.

The festival will be held on Saturday 23rd and Sunday 24th August. There are limited early bird tickets available but hurry as they are only available at the reduced price for the next ten days! Adult Day tickets are currently available for £15 per day and will be £20 after. You can pick one up via the website HERE, or directly at Little Johnny Russells or either of the Belle Isle restaurants. Kids tickets will cost £6 but those under the age of five can enter the festival for free.

Over the next five months we will try and keep you up to date on announcements and preview the performers and attractions that you can look forward to. 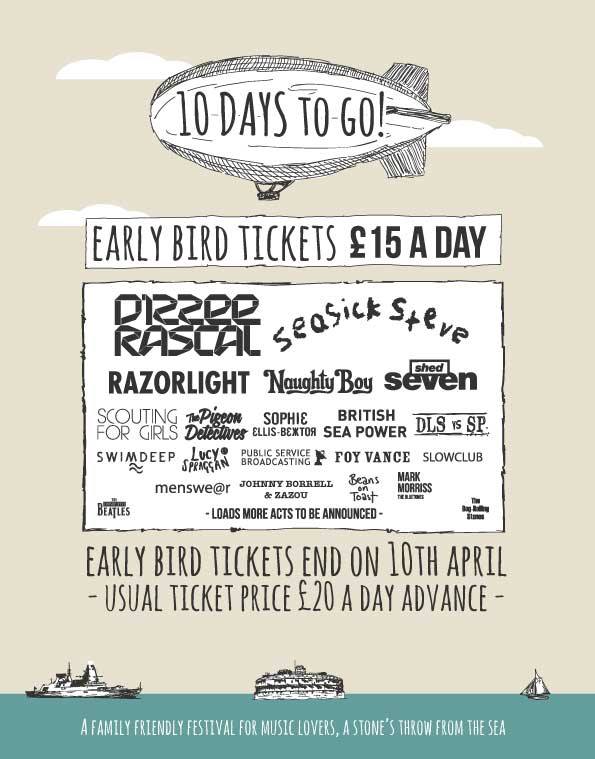